The Keystone XL Pipeline Debate is Right Where We Want It

Back in August 2011, during the first few days of sit-ins at the White House against the Keystone XL pipeline, the press basically ignored us. I’d call around to all the national outlets and wires and mostly get the question “What’s Keystone XL?” or “Isn’t that out in Nebraska somewhere?” While the pipeline had been simmering as a regional fight for a while, it was all but unknown inside the beltway. 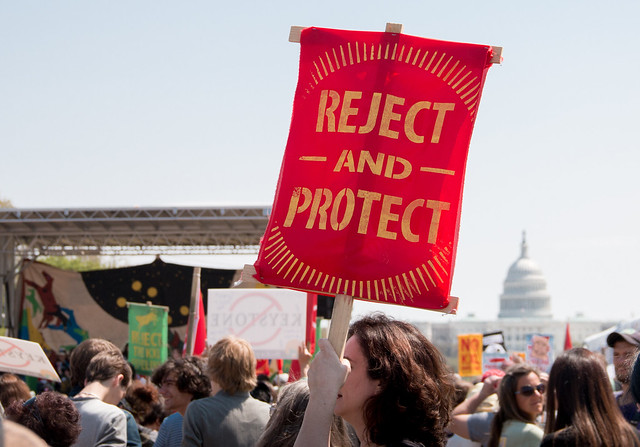 Photo by Victoria PickeringMany of the students who participted in Keystone protests in Washington DC, are now leading fossil fuel divestment campaigns on their college campuses.

How times have changed. On Tuesday afternoon, my Twitter feed exploded with posts from news outlets and correspondents reporting that White House press secretary Josh Earnest had said that President Obama would veto any Senate legislation that attempted to automatically approve Keystone XL. Just six days into 2015, and the pipeline was already back in the headlines, right where we wanted it.

Over the last five years, thanks to the activism of millions across the country, Keystone XL has emerged as the highest profile environmental fight in a generation. From the very start, most pundits and DC commentators said it was a fight we were going to lose. Back in the fall of 2011, not long after our first sit-ins, the National Journal did a poll of its “Energy Insiders.” Ninety two percent of them said that President Obama would approve the project, 72 percent thought it would happen within the year. I can’t count the number of columns saying that Keystone was the wrong fight, a waste of time, or a distraction from more important issues.

They couldn’t have been more wrong. Five years later, the pipeline remains unbuilt and the campaign against Keystone XL has helped galvanize the climate movement. Keystone hasn’t distracted people from other issues, like the new EPA regulations or fracking, it’s energized them to get more deeply engaged. The students who sat-in against Keystone at XL Dissent in Washington DC last March are many of the same activists who are now leading fossil fuel divestment campaigns on campus. Local organizers who traveled to DC for major pipeline protests are now at work back at home stopping local dirty energy projects and promoting sustainable alternatives.

There couldn’t be a better example of this new energy that’s infused the environmental movement than last September’s People’s Climate March. Five years ago, getting 100,000 people to march in New York City for climate action would have seemed impossible. Not anymore. The People’s Climate March turned out over 400,000 people, and not just hardened pipeline activists, but mothers, students, unions, social justice groups, and more. Our opposition to Keystone XL hasn’t marginalized the climate movement. It’s made us bigger, louder, and more powerful than ever.

Now, as we enter into another chapter of the fight against Keystone XL (I learned long ago to stop saying the “last chapter”), we’ve got the wind in our sails. President Obama’s opposition to the project has never sounded stronger. In all of his recent interviews on the subject, he’s played down any benefits of the projects and emphasized the potential risks. The GOP’s push on the pipeline will only serve to harden White House opposition: The more partisan the pipeline becomes, the less likely it is to be approved.

Meanwhile, low oil prices have delivered two important blows to the pipeline. First, it has destroyed the argument that Keystone XL is somehow crucial to American energy security and keeping prices low at the pump. (Not that those talking points were ever based in reality — studies have shown that Keystone XL is mostly an export pipeline and that, if anything, it could drive up gas prices in the Midwest if approved). Second, it has made the climate impacts of the pipeline unavoidable.

The industry contractor hired by the State Department to review the environmental impacts of the pipeline originally argued that with high oil prices, tar sands development was “inevitable” and therefore you couldn’t really blame Keystone XL for any of the carbon emissions associated with pumping 700,000 barrels a day of the dirtiest fuel on the planet that would flow through the pipeline. The analysis was full of holes, but it gave pipeline proponents their other favorite talking point, “the pipeline has no environmental impact!”

But there was a catch: the contractor also concluded that if oil prices fell below $70 a barrel, then the profit margins on tar sands production would be so small that pipeline alternatives, like rail, would become too expensive. That would make Keystone XL a critical piece of infrastructure and a huge source of new carbon emissions. Under that scenario, Keystone XL would clearly fail President Obama’s climate test, forcing a pipeline rejection. With oil prices now at $50 a barrel, we’re well under that price threshold, leaving President Obama no way to logically approve the project.

When the president issued a veto threat on Tuesday, he absorbed almost all the political pain of saying no to Keystone XL. Before last November, Obama may have been concerned about the impact a rejection would have on moderate Democrats. Now, he has nothing to lose. The fight is a long way from over, but there are good reasons to feel confident.

Keystone XL is back on the front pages. Let’s hope the next headline reads: “Rejection.”