A family in France produces just 11 pounds of trash per person every year
This article originally appeared in FUTUREPERFECT.
Rhea Almeida

The Poirier family, who lives near Nantes, consists of a mom, a dad, three kids, a cat and… very little trash. Claire, Emmanuel, Matthias, Elsa and Jade generate eleven pounds of waste per head each year. This is almost 50 times less than what ends up in the garbage cans of the average Frenchman! 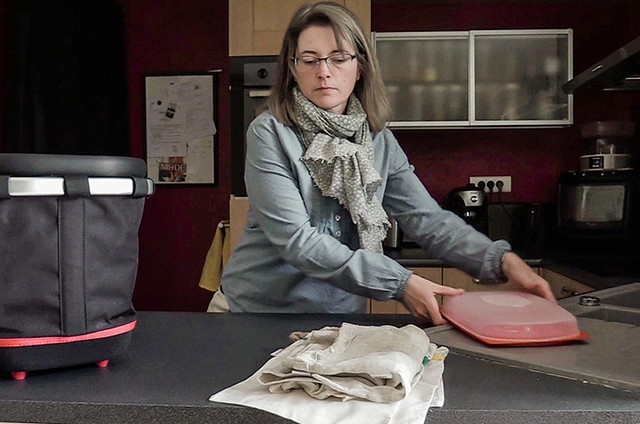 Photo by Bastamag Claire Poirier shops with her own containers and tote bags.

Everything began six years ago. “Back then, our income plummeted,” Claire tells us. “My husband was laid off and then found a job that paid only a third of what he’d made before. I decided to take parental leave to take care of our two daughters.” For a family that was not used to tracking their expenditures, it was an adjustment. First, the Poiriers turned to the lowest-price items at supermarkets and discount stores, but that did not work well for them. “We found that canned food was of poor quality, the products were too fatty,” Claire remembers.

“So we thought about it and decided to try something different. We are lucky to live in the countryside, in a village that had a local farmers’ association that sells organic produce at a reasonable price. We liked the fact that we were supporting a local farmer.”

As the Poiriers switched to local and organic produce, their community imposed a new tax designed to reduce household waste. “You pay by volume,” Claire explains. “This got us thinking about the waste we generate.” In order not to exceed twelve 48-gallon bins (180-liter bins) annually, the cheapest garbage pick-up option offered by the community, the family reorganized their house a little bit. “To optimize our triage, we put the compost bin underneath the sink and arranged the trash cans to make them more accessible so that we could really sort each trash item.”

Shopping with Mason jars and tote bags Claire and her little team dropped down to 44 pounds of waste per head annually, while the national average amounts to over 500 pounds of trash! But the young woman was determined to do even better. She did some research and stumbled upon a book by Béa Johnson, Zero Waste Home. The Ultimate Guide to Simplifying Your Life by Reducing Your Waste! In this book, a Frenchwoman living in the United States with her family tells how she managed to significantly reduce her everyday trash. Today, the annual waste of the Johnson family fits into … a pint-sized Mason jar!

In January of 2014, Claire Poirier, too, took her first steps towards a zero-waste consumer. “I am quite shy and had to pluck up the courage to ask merchants to put my purchases in my own containers and jars rather than their wrappers and plastic bags.” She started with the little organic grocery store in her village. Then she tried the same at the farmer’s market. Each time, people were really nice about it. The chicken merchant quickly got used to her large cake container and the dairy merchant to her glass jars.

In addition to her containers and jars, Claire made her own tote bags of various sizes. Once a month, she fills them up with dry foods – pasta, rice, legumes – which are sold unwrapped at the “Organic Co-op” of Nantes. “Once a fortnight, I also go to the pick-up spot at the big supermarket near us to get anything I can’t get without packaging: milk, some canned foods, juices and fruit.” She remembers that not too long ago, she would spend two hours a week in a supermarket, scouring every aisle to make sure she wasn’t forgetting anything. “I spent a lot of time in the aisles with the special offers. And I ended up buying things that I didn’t really need: clothes, little kitchen utensils, decorative items.”

The Poiriers quickly grew accustomed to the five Rs proposed by Béa Johnson: refuse (what we don’t need), reduce (what we do need), reuse, recycle, rot. “We put off shopping as long as possible”, says Claire, to make sure they really actually need to go. “We prefer items that are on sale, even when we buy presents.” Claire and Emmanuel realized that each year at Christmas time, they would wonder what to give their children, only to come to the conclusion that they didn’t need anything. “This isn’t about not celebrating Christmas; we don’t want to upset them. But we substantially reduced the number of presents.”

Claire admits that it is sometimes hard to pursue the zero-waste strategy with a teen in the house. “Also, my son remembers a time when I would go to the store and buy him those cakes that he loves… He also had to get used to a new lifestyle. There are subjects that cause friction, of course. When it comes to clothes, for example. For my daughters, I can find almost everything at second-hand stores, but they don’t have a lot of things for a boy of fourteen. Besides, there is a lot of pressure in middle school to wear name-brand clothing.” Claire and Emmanuel therefore made an effort for Matthias, and are buying him new name-brand clothing. “But he has less than the others,” says Claire.

“I used to focus mainly on what would happen to trash after you throw it out,” Claire adds. “I told myself that I had no choice, that it wasn’t my fault if I left such a big footprint. I didn’t make the connection between my consumption patterns and the waste I generated.” Claire sometimes comes across negative nancies who tell her that she is ruining the economy. “People keep telling us that job growth requires economic growth, and hence, consumption. But I tell them that I buy locally, which also supports jobs, but certainly not the same ones that they are talking about…”