With other companies making progress on palm oil, there’s no excuse for Girl Scouts’ inaction
Rhiannon Tomtishen and Madison Vorva

In seventh grade, we were inspired by Jane Goodall’s dedication to chimpanzee conservation and decided to raise awareness about the endangered orangutan in order to earn our Girl Scout Bronze award. When we discovered that the orangutans’ rainforest habitat is destroyed for palm oil plantations, we began educating our peers with a poster board presentation. In the seven years since then, we’ve grown that middle school awareness campaign to an international platform. 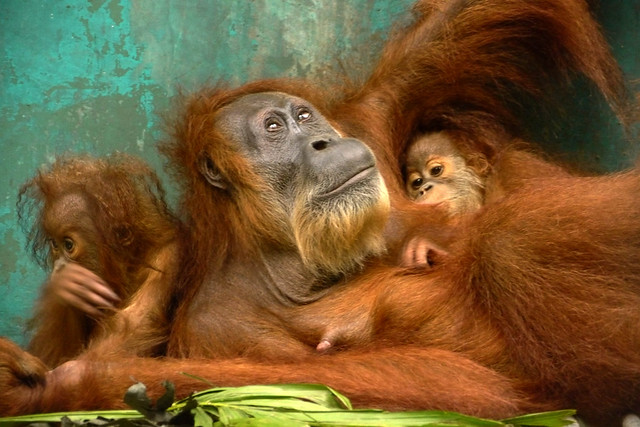 Photo by Carlos Quiles/Rainforest Action NetworkEndangered orangutans’ rainforest habitat is being destroyed for palm oil plantations. Yet, instead of changing where the palm oil for their cookies is sourced from, Girl Scouts USA is purchasing misleading “GreenPalm” certificates.

We learned that unsustainable palm oil production isn’t just threatening orangutans. Indonesia is the third largest emitter of greenhouse gases due to its rates of deforestation and peat burning, both of which are driven by this industry. Additionally, in 2012, the US Department of Labor linked palm oil production in Indonesia with child labor, and in Malaysia with forced labor. Social injustices linked to palm oil also occur in other countries. During a trip to Colombia with a human rights organization called Witness For Peace, we had the opportunity to speak with communities directly impacted by this industry. Paramilitary groups there had forcibly displaced these people and sold the stolen land to palm oil corporations.

This single ingredient is harming people, animals and the environment, and it’s in 50 percent of the products on American grocery store shelves. Imagine our shock and dismay when we discovered that Girl Scout cookies contain palm oil. As members of the organization since first grade, we had been taught the importance of environmental stewardship and service. Part of the Girl Scout Law includes “to make the world a better place.” Switching to a source of deforestation-free palm oil for its cookies seemed like the right thing for the Girl Scouts to do.

So we launched a campaign called Project ORANGS to bring this issue to the attention of our national organization. More than 140,000 people signed our online petitions, hundreds of Girl Scouts decorated puzzle pieces and earned our “Rainforest Hero” badge, and we educated millions of consumers through appearances in the Wall Street Journal, ABC World News, NPR, and TIME magazine. Girl Scout executives met with us in May 2011, and the organization announced a palm oil policy six months later.

Unfortunately, Girl Scouts USA’s policy does not do enough to ensure that the palm oil used in Girl Scout cookies isn’t contributing to human rights abuses and deforestation. Instead of changing where the palm oil is sourced from, Girl Scouts USA is purchasing GreenPalm certificates to offset its use of unsustainable palm oil. The misleading “GreenPalm Sustainability” logo is now placed on every single box of cookies. While we hoped to work with the organization to strengthen its existing policy, we received an email last fall severing our working relationship despite a prior commitment from the organization to continue speaking with us.

Yet we remain hopeful because enormous progress toward sustainability is happening within the greater palm oil industry. Our goal has been to make the largest impact possible, so we began speaking with Kellogg’s executives in 2012 to discuss that company’s palm oil policy for its entire product line, including the portion of Girl Scout cookies it bakes. Last summer, we delivered more than 115,000 petitions with an organization called SumofUS to the company’s headquarters in our home state of Michigan. On February 14, Kellogg’s announced a commitment to source palm oil that is “produced in a manner that’s environmentally responsible, socially beneficial and economically viable.” Kellogg’s new palm oil policy is the strongest commitment by an American company to date in preventing deforestation and species extinction; its policy has strong traceability guidelines and will be in effect by 2016. The Girl Scout cookies that are baked by Kellogg’s Little Brownie Bakers will also be forest friendly.

We are proud of Kellogg’s leadership role and are pleased that other companies including Hershey, Mars, Mondelez and L’Oreal have since adopted similar palm oil policies. In response to market shifts, Wilmar and Golden Agri-Resources, two of the world’s largest palm oil suppliers, have announced that they will transition to traceable deforestation-free supply chains as well. With these developments, it is now estimated that about half of the world’s palm oil is bound under deforestation-free and conflict-free commitments, something that was unfathomable a just few years ago. There’s no longer any excuse for companies — including the Girl Scouts! — to not strengthen their palm oil policy.

Although we aren’t experts in a particular field or science, we have a role to play in this issue —and that’s to make palm oil an everyday concern when customers visit the grocery store or see local Girl Scouts selling cookies on the corner. As consumers, we need to evaluate the way we are exhausting our planet’s resources. If we don’t consider the impacts our purchasing decisions have on local and global communities, it is easy to ignore the destruction that occurs. It is up to each of us to tell companies we only want products that use deforestation-free sources of palm oil. We challenge you today to consider and embrace the power you have to advocate for forests in your own roles as consumers.