Berkeley, CA (July 21, 2021) — The New Leaders Initiative of Earth Island Institute is excited to announce the dates for its virtual Brower Youth Awards, one of the leading environmental youth leadership awards in the country.

“The Brower Youth Awards is always an inspiring and uplifting event, a great opportunity for young environmental leaders and supporters to come together and look toward a bright future,” said Mona Shomali, director of the New Leaders Initiative (NLI). 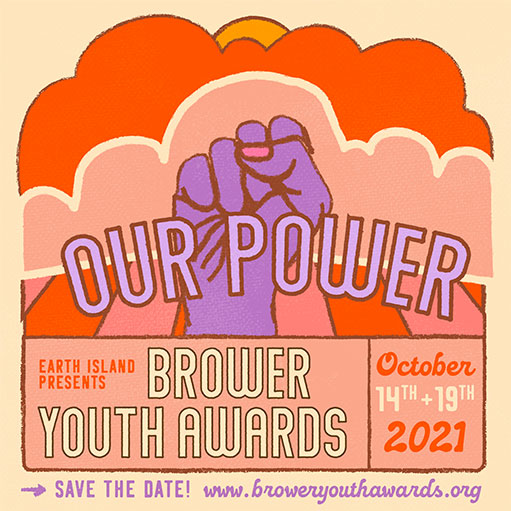 “The theme for this year’s event is ‘Our Power,’ referring to the unique power of this generation of winners. This year’s winners are all leaders that all have the strength to mobilize environmental activist movements. Through their activism, they are pushing the culture forward. Their unique power is their ability to effectively produce an impact, a paradigm shift in a time of environmental peril,” she added.

Earth Island Institute, an environmental nonprofit based in Berkeley, California, has been hosting the awards program for the past twenty-two years, through its New Leaders Initiative program, and in honor of the organization’s founder, legendary environmentalist David Brower.

The New Leaders Initiative provides cutting-edge, innovative programming to help build the capacity of young, emerging environmental activists. Every year, six young people based in North America are each awarded a cash prize of $3,000.

In addition to the award, NLI produces a leadership week for the winners that consists of training sessions by top leaders in their respective fields. This year’s training, with coaching on fundraising, leadership, and marketing, will provide the winners with skills they’ll need to succeed in building their programs and projects.

Images of this year’s winners, their bios, and video clips will be made available to the media upon request once they are announced. Winners will also be available for interview.