It was August of 2014, in the midst of the worst California drought in recent history, when I first saw the stream bordering my property run dry. There it was, a disconnected watercourse revealing a barren creek bed. In an isolated pool among the rocks, suffering in the unbearable heat, were several land-locked juvenile steelhead. They were doomed. The rains would not come in time. There was nothing I could do to save them, and I felt ashamed to be one of the marijuana farmers diverting water in that watershed. 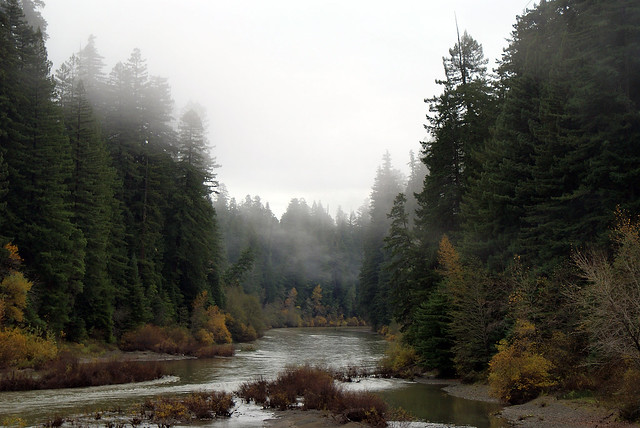 photo by Linnea ☀ / FlickrNorthern California’s Eel River. The ongoing California drought, paired with excessive diversion to quench the thirst of marijuana plants in the Emerald Triangle, has led to the dewatering of Eel River tributaries.

This had never happened before. In the 25 years I’d been growing in Northern California’s lush Humboldt County, there had always been plenty of flowing water for small gardeners to borrow. The creek used to be an impassable torrent of fresh, pure snowmelt in the spring, rushing through curves in the bank and cascading down waterfalls. The water always swept down from the high mountains in the east well into the sweltering dog days of July. The flow might subside in August, but it would never disappear.

During California’s ongoing drought, tributaries of the Eel River were dewatered by excessive diversion to quench the thirst of tens of thousands of marijuana plants growing in the Emerald Triangle. It was the Johnny-come-lately Green Rush industrial growers who had caused this, and I hated them for it. I could feel a darkness falling upon this land as their hired water trucks thundered through the woods to save their crops. All I could do was pray for rain. I realized back then that this was the beginning of the end for the life I had struggled so hard to achieve, and for the treasured flora and fauna of Humboldt’s vibrant forests.

It all began in the 1970s. In the age of Watergate and the Vietnam War, the first back-to-the-landers began moving out of California’s cities and buying cheap, steep, logged-over land in Humboldt County. They were embarking on a new adventure, one that would mark the birth of a cottage industry and the first decade of serious cannabis cultivation in the region.

The movement started small. Using seeds smuggled in from Afghanistan, young families grew the infamous Kush. We planted just enough to get by, and reinvested any extra earnings back into the community. We were connected to the land that provided for us, and took care to do as little harm as possible.

Life was good. Back then, I called this place the Green Idyll, a reminder that wet, rainy winters foretold summer rivers flowing high with clear, cold, emerald-green water. It was a time of awakening orchids, wild rose, flowering dogwood, and fragrant herbs grown by botanical artisans. Here and there fruits and vegetables melted into rainbow horizons and intoxicating aromas from cobalt green Cannabis Sativa wafted happily upon glorious sunbeams. Cherry-colored manzanita formed matrixes of filtered sunlight where deer and the crudely-fenced pot plants found camouflaged havens.

Industrious folks could hike around the wilderness and discover hidden springs that could supply drip irrigation systems to water “40 buckets” of Kush dank, enough to sustain their family for a year. There was only one growing season in those early days, and it followed the baseball season: seeding in the spring, and a World Series harvest in the fall for the lucky ones.

By the mid-1990s, with high prices for cannabis and the legalization of medical marijuana in California, most local hippies, rednecks, ranchers, and environmentalists in Humboldt were growing weed to make a living.

Marijuana farming brought many good things to the densely forested region: a health clinic, a community center, schools, a radio station, off-the grid energy, volunteer fire departments, and even a world-renowned yearly reggae festival. Activist groups that formed to save the remaining old-growth redwoods were funded by marijuana sales. It was a grand conspiracy that united everyone. “Don’t tell on me; I won’t tell on you,” was the operative motto back in the time before the time.

Still, risks were high. Way back in 1972, cops landed a Huey helicopter at a place called Pratt Mountain, and a federal agent shot dead an unarmed man, Dirk Dickenson, as he ran out of his cabin. This shocking event foreshadowed the federally funded, military-style Campaign Against Marijuana Planting, founded in the 1980s, which cracked down on the budding industry. Cops in low-flying helicopters began pointing M-16s at farmers hidden in the bush, and curtilages were invaded frequently.

As law enforcement efforts escalated, growers who got too big were sentenced to prison terms. Many unlucky farmers had their land confiscated as part of a decade-long asset forfeiture program run by the Humboldt County Sheriff’s enforcement division, called the “Drug Task Force.” Residents lived in fear, hiding in the backcountry. But prohibition kept the prices – and incentives – high.

The wise settlers who really loved the land made a living, not a killing, flying under the radar while maintaining the land they cared for. They were easy on water use, and hiked around to find sunny grow spots, avoiding the need to fell beautiful Douglas firs. Good gardeners could grow pound-sized plants using only a shovel and one bag per hole of Stutzman chicken manure mixed with the lousy red clay soil. Simple systems of buried PVC pipes relied on gravity to move water to the clandestine gardens, a technology imported from Israel. In a time of frequent helicopter patrols, small operations – and small carbon footprints – meant survival.

Growing was hard physical labor and came with real risks, but it was an easy economy to understand and it came with a good life. Primitive homesteads became sanctuaries. People could dive into deep water holes on the Eel River after the day’s work was done and swim with prehistoric sturgeons. The salmon and steelhead still had plenty of cool water to spawn in, and sheltered habitat for fish was abundant. Those who chose to live simply could have a nice middle-class existence. Entrepreneurs thrived, and every sparkling sunrise in the sunny hills and valleys near Garberville was dubbed “just another day in Paradise.”

That was then, and this is now. In the early 2010s, as legalization of recreational marijuana use began to seem inevitable in California, prospectors began rushing to Humboldt to get in on the action. Hippie lifestyles began to wane quickly as “pot yuppies” multiplied and large grow operations proliferated. Few were prepared for what was to come.

Today, the Green Rush has fully descended upon Humboldt County. Pot is this region’s newest extractive industry, and it is compounding the environmental damage left by decades of logging in the region.

The proliferation of indoor and light-deprivation growing has made three harvests possible every year. Marijuana prices have dropped, so only big players with gaggles of employees and heavy financing can prosper. Corporations naming themselves LLC are buying up parcels from aging baby boomers who can no longer compete in the slumping market. Foreigners and East Coast profiteers grab properties as soon as they go on the market, and sellers receive cash offers from Las Vegas high rollers emboldened by Nevada’s new medical marijuana empire. Where there had always been peaceful coexistence before, thugs on ATVs intimidate neighbors. Newcomers armed with guns, guard dogs, bulldozers, and insatiable greed drive out the old-timey farmers. 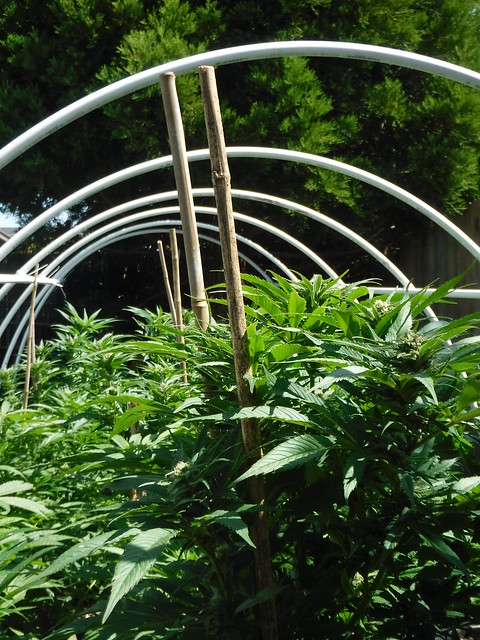 It seems like anything goes in this new paradigm, and the environment is paying the price. Corporate growers operate year-round, so the pull on finite water resources is strong. As the streams run dry, water trucks roar through the numerous roads-to-nowhere that were bulldozed in by the Green Rushers. Wells are being dug at record rates, and Honda water pumps are easily installed on just about every watershed to support Big Pot. Endangered Chinook and coho salmon are dying out.

It’s not just the streams and fish that are suffering. Everywhere you look, carpetbagger newcomers are clear-cutting Douglas fir forests and oak woodlands with or without legal permits, destroying the hills to make room for greenhouses. The hoop houses of dope – which shelter tender plants and extend the growing season – are everywhere. Every horizon I scan from my panoramic lookout is dotted with hoops upon hoops where trees, grasslands, and native plants used to be.

Trucks loaded with dirt come through daily, delivering Foxfarm soil east and south along the Highway 101 corridor for use in raised beds. Chemical fertilizers used to boost yields are also problematic. The ranches surrounding my property borders on all sides are littered with trailers and makeshift camps to house migrant workers who help tend the plants and trim the product. Herds of cattle still graze amid this chaotic land conversion.

The Green Rushers work far into moonless nights, delivering water to the greenhouse storage tanks. Diesel generators hum, spewing black smoke into the atmosphere and powering lights that make the wilderness glow with strange apparitions. People say that once you cross the Humboldt County line and look into the hills, you can see greenhouse grow lights stealing the night sky from starwatchers.

County supervisors have turned a blind eye to the unraveling ecological disaster, waiting for Californians to vote on the legalization of recreational marijuana use. Local government can hardly wait to start collecting the draconian tax payments from the Green Rush growers that will come with legalization, which was approved by voters in November.

I had always looked to the stars for comfort after the day’s toil, but now the silence of the celestial afterglow is broken by automatic weapons and methamphetamine-fueled violence. Old-time Humboldt hills homesteaders like me are powerless against this Green Rush. Our once sustainable small-business model has taken a disastrous turn and our livelihoods are free-falling, burning out like the shooting stars.

A few months ago, I finally accepted that my time at this bend in the river was over. Like many others before me, I too sold out to the highest bidder, took the money and ran.

Ronald Hale is the pen name of an evolving farmer, freelance writer, and long-time resident of Humboldt County. He is still searching for the “Green Idyll.”