The Future is Electric

A low cost way to decarbonize our buildings already exists.

A FAVORITE PASTIME OF MINE is browsing real estate listings, looking at houses for sale across the US. I am not looking to buy — just curious about what is on the market and what home designs are trending at the moment. Recently, I have noticed a small trend that gets me excited — more and more homes have sleek, modern induction stoves. Induction stoves have also been an increasing topic of interest across broadcast news, newspapers, and social media platforms as the benefits of having all-electric appliances have become clearer. And it’s not just induction cooking that is gaining momentum — the use of electricity for heating has grown by 50 percent in the last five years, driven in large part by heat pumps (which are less likely to be featured on real estate listings).

One of the best ways to eliminate the pollution and harmful chemicals released by gas stoves is to replace them with induction units. Photo by Cotton Bro/Unsplash.

Across the country, more than 70 cities now have policies in place mandating or incentivizing all-electric new construction of homes and buildings. Numerous cities and states are exploring the possibility of retrofitting existing buildings to move away from gas, often phasing in all-electric appliances as gas appliances reach their end of life. So why are cities taking such a big interest in the appliances we use at home?

Because a tenth of total US carbon emissions come from burning fossil fuels — primarily gas — for heating and cooking across millions of American homes and businesses. In fact, most of our personal carbon emissions are tied to our homes, especially for those who don’t drive a gas-powered personal vehicle. These gas appliances emit harmful air pollutants inside and outside the home, including carbon monoxide, nitrogen dioxide, particulate matter, and formaldehyde, creating hazardous air quality and contributing to climate change. 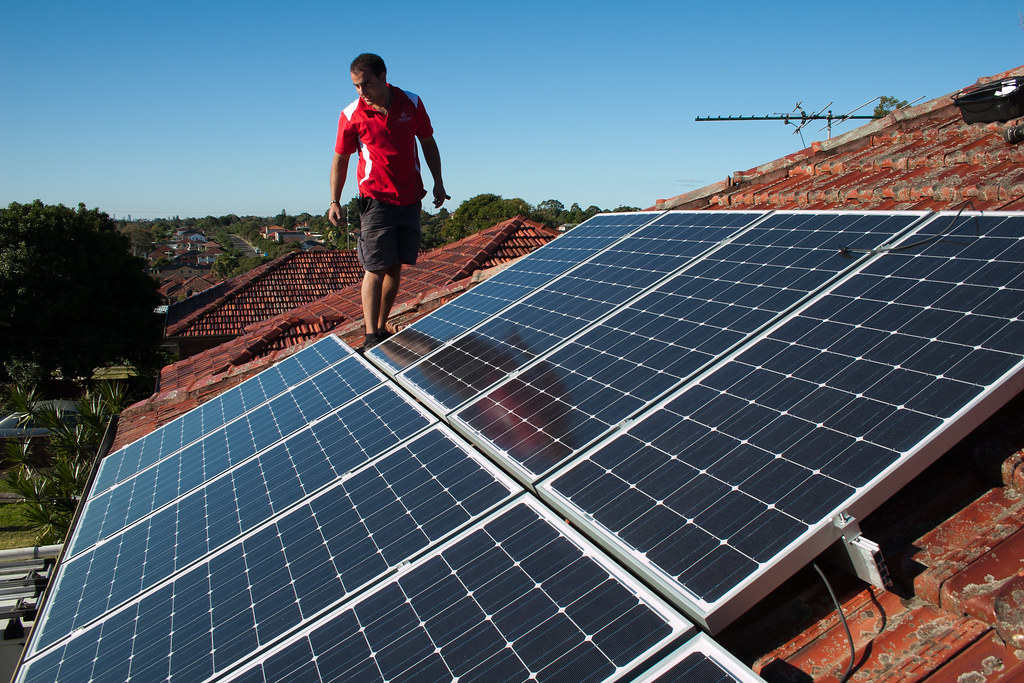 All-electric homes are both cheaper to build and to operate than their mixed-fuel counterparts, and costs are expected to continue to decline. Photo of a rooftop solar installation in New South Wales, Australia, by Edmund Tse. 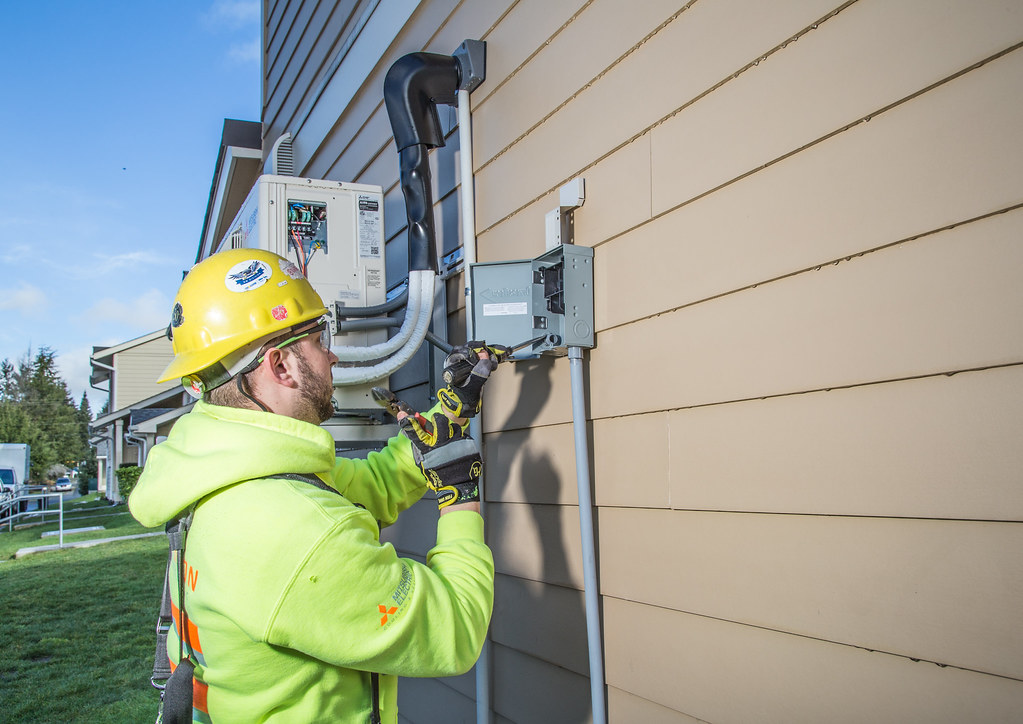 Fortunately, building electrification — replacing fossil-fueled appliances with efficient electric appliances powered by clean electricity — is a relatively low-cost, low-risk way to reduce emissions associated with buildings. There is no need to invest billions of dollars in alternative fuels such as biogas or hydrogen, or to expand gas infrastructure when the solutions we need to decarbonize our building stock already exist today.

BUILDINGS ARE OFTEN overlooked when it comes to air pollution, but building emissions are linked to a greater number of premature deaths than either the power generation or transportation sectors. A 2021 study from Harvard TH Chan School of public health showed that burning gas, wood, and biomass in buildings was responsible for approximately 18,300 early deaths and $205 billion in health impacts a year in the United States, a third of the health burden from stationary sources in the country.

Gas stoves, which sit at the heart of many of our homes, generate unhealthy levels of toxic pollutants.

Thanks to gas appliance pollution, the air we breathe indoors — where we spend close to 90 percent of our time on average — is often more polluted than outside air. Gas stoves, which sit at the heart of many of our homes, generate unhealthy levels of toxic pollutants such as nitrogen dioxide and particulate matter (PM2.5), posing a significant health risk. For example, children living in homes with a gas stove have a 42 percent increased risk of asthma. And nearly five decades of research shows that children, low-income households, and people of color are more likely to be harmed by this pollution.

If that wasn’t bad enough, a recent study from the Harvard TH Chan School of Public Health and PSE Healthy Energy found that gas delivered to homes contains low concentrations of several chemicals linked to cancer. Natural gas can leak into homes even while appliances are “off.” While there are things we can do to lessen the negative health effects of toxic gas stoves, such as proper ventilation or opening windows, these measures do not eliminate the climate impacts of burning this fossil fuel.

One of the best ways to eliminate the pollution and harmful chemicals released by gas stoves is to replace them with induction units. Induction stoves do everything that gas can. Better yet, they heat faster, allow more precise temperature control, are safer to touch, and are nearly three times as efficient as gas stoves. There is a bit of a learning curve when it comes to cooking with them, but once you get comfortable with induction you will never go back to gas. (And I personally find them so much easier to clean.)

Another way to reduce building emissions is to replace gas-powered furnaces and air conditioning units with heat pumps, an efficient, climate-aligned, all-electric appliance that can both heat and cool a home or business. Think of them as AC units that can run in reverse. In the summer, they work the same as ACs, cooling the inside of our homes. In the winter, they collect heat from outside — even when it is cold out — and bring that warmth indoors. They can achieve efficiencies three to six times higher than conventional competing technologies, resulting in lower energy use and operating costs.

Despite what you may have heard, new heat pumps perform well in cold climates, operating at more than double the efficiency of gas systems in below-zero degree temperatures. What is even more exciting is that given their dual ability to heat and cool, they also provide a comfortable and safe indoor temperature during extreme heat. Furthermore, the cost of heat pumps is projected to continue to decline in coming years. Given volatile gas prices, heat pumps are already the most cost-effective climate-control solution.

Decades ago, when most of our electricity came from coal, heating with electricity was dirtier and more expensive than burning gas. But now, in almost all but the most coal-heavy regions, electrification reduces carbon emissions using today’s technology and our existing electric grid. Replacing gas furnaces with heat pumps would lower carbon pollution in 99 percent of US households, and for the average house, it would cut heating related emissions by 45 percent over 10 years.

GAS IS THE FASTEST GROWING source of climate pollution in the US. Gas emissions from buildings increased a full 10 percent in 2018, largely driven by gas appliances. The US cannot achieve its decarbonization goals without eliminating pollution from gas appliances nationwide. All-electric construction is already the standard in many states across the US and nearly 60 percent of new homes nationwide are being built all-electric. RMI research shows we must electrify all new buildings by 2025 and stop installing new gas appliances in existing buildings by 2030 to mitigate the worst effects of climate change.

Every new building built with fossil fuel technologies today becomes a climate and economic problem we will have to deal with in the future.

Every new building built with fossil fuel technologies today becomes a climate and economic problem we will have to deal with in the future. Study after study has shown that building electrification is the most cost-effective approach to aligning our buildings sector to our climate goals. RMI’s soon-to-be released research shows that across multiple US cities — including Austin, Boston, Columbus, Denver, Eugene, Las Vegas, Minneapolis, Seattle, and New York City — all-electric homes are both cheaper to build and to operate than their mixed-fuel counterparts, and costs are expected to continue to decline. (New research and updates coming to this previous analysis later this year.)

As cities across the country continue to embrace electrification, we also need federal and state policies to drive down costs, transform the market, and quickly scale adoption. Investing in workforce training programs can develop the skilled workers needed to build this clean future. Most importantly, we must prioritize an equitable transition with policies supporting electrification in lower- and fixed-income households and frontline communities.

By investing and prioritizing building electrification, we have the opportunity to create a more resilient and equitable built environment now. I am hopeful that by the end of this decade, as I scroll through real estate listings, I will see more and more all-electric homes on the market.

Lacey Tan is a manager in RMI’s Carbon-Free Buildings Program, currently focused on providing policymakers and the building design community with the information and resources they need to drive a market shift toward a more efficient, affordable, and equitable fossil-free housing stock.