In urban schools in New York, Maryland, California, and beyond, hydroponic farms are being used as teaching tools that also address food-access challenges.

High school students tend to plants in the hydroponic farm maintained by Green Street Academy in West Baltimore. Photo by Julie Andersen. This article was produced in collaboration with Civil Eats .

AT THE END OF JUNE, INSIDE a 4,000-square-foot greenhouse in West Baltimore, untended basil plants were falling over and going to seed. School was out, so the farmers — students at public charter school Green Street Academy — had abandoned their crops for the summer.

No matter: Right after the July 4th holiday, a group would be back in the space for a five-week entrepreneurship program, during which they’d be trained to tend to the plants and technology and learn business skills. Since hydroponic farms don’t have to adhere to traditional growing seasons and because they also accelerate plant growth, the herbs would get back on track in no time.

The greenhouse, which was completed last year, is one example of a new wave of middle and high schools around the country that are embracing hydroponic farming. Advances in technology coupled with steady decreases in price make hydroponics an appealing interdisciplinary teaching tool — as well as a way to produce fresh, healthy food for students for both their cafeterias and broader communities.

In hydroponics, well-funded startup companies growing vegetables at a mind-boggling scale using high-tech sensors and robots tend to get all the attention. Those companies are making bold claims around the superiority of their systems on metrics such as climate impact and resilience — even as unanswered questions about energy use, impacts on workers and small farms, health, and profitability linger.

The rise of in-school hydroponics builds off the decades of work by school garden programs.

But hydroponic systems deserve the spotlight for another reason, says J.J. Reidy, the founder and CEO of a real estate design company that helped build and raise funds for the Green Street greenhouse. They can be plugged into a long list of places — including food banks, low-income housing developments, and schools — where land access and other factors make outdoor farming a challenge. And while the upfront cost is significant, they can produce more food year-round in small spaces, which changes the value calculation. “We have to look at growing food in urban environments,” he says. “So, how do you leverage and activate underutilized space?” 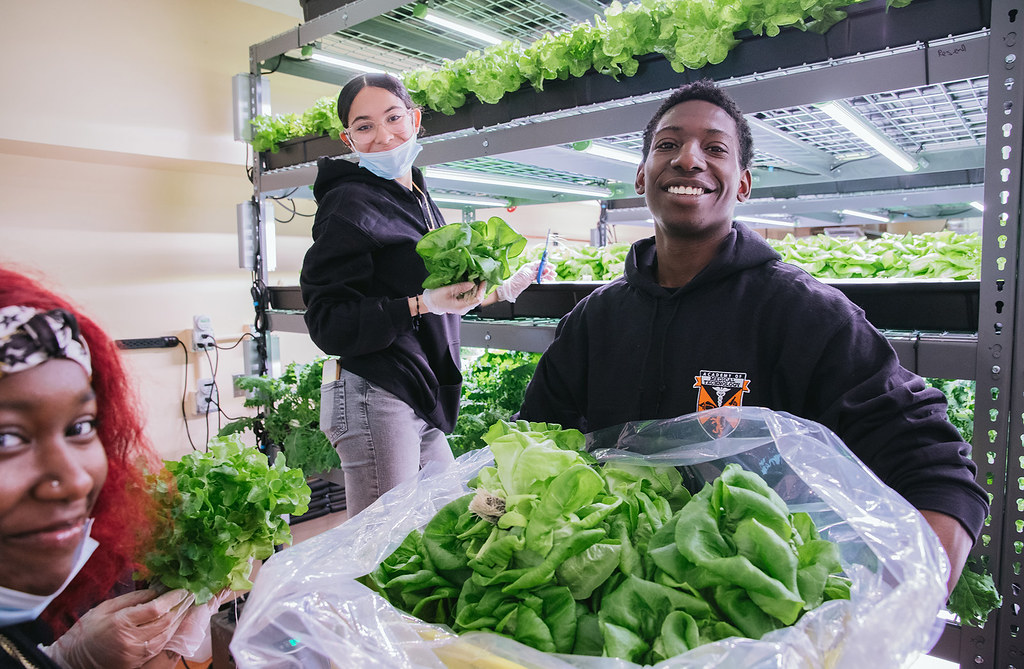 At Baltimore’s Green Street Academy, the hydroponic greenhouse grew out of a robust agricultural training program, which includes a small hoop house for growing vegetables, an orchard, and a chicken coop. Photo by Julie Hove Andersen. 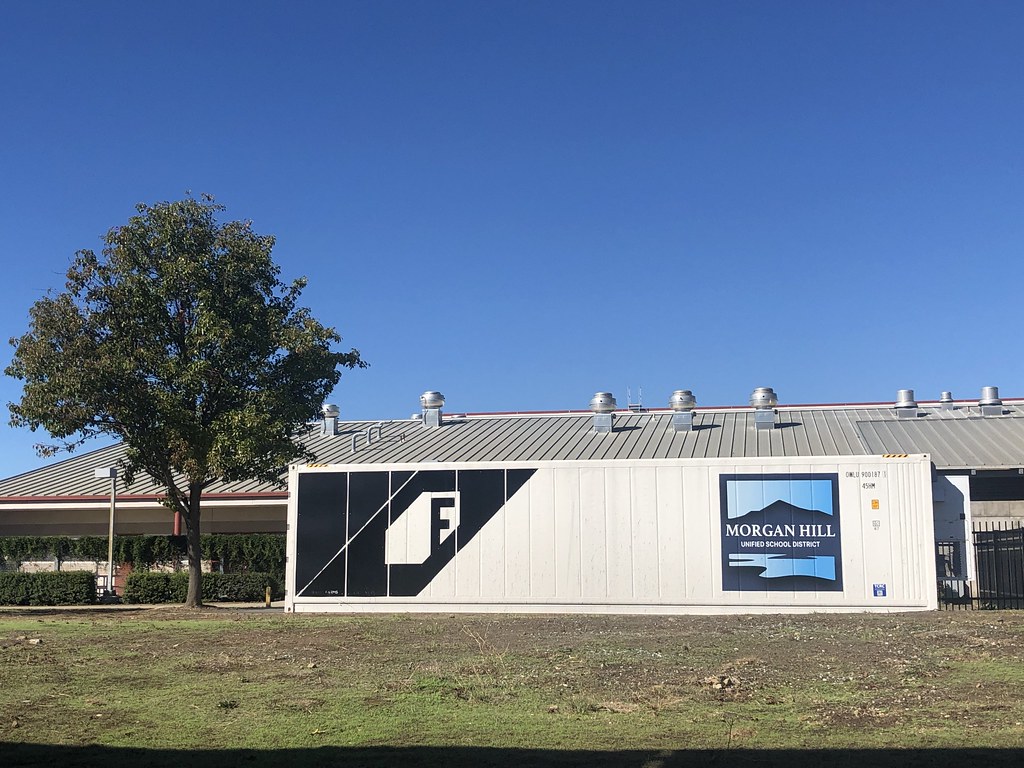 A “Freight Farm” in a high school parking lot in Morgan Hill Unified School District in San Jose, California. Hydroponic farms farms can be plugged into places like schools and low-income housing developments where land access and other factors make outdoor farming a challenge. Photo by Michael Jochner. 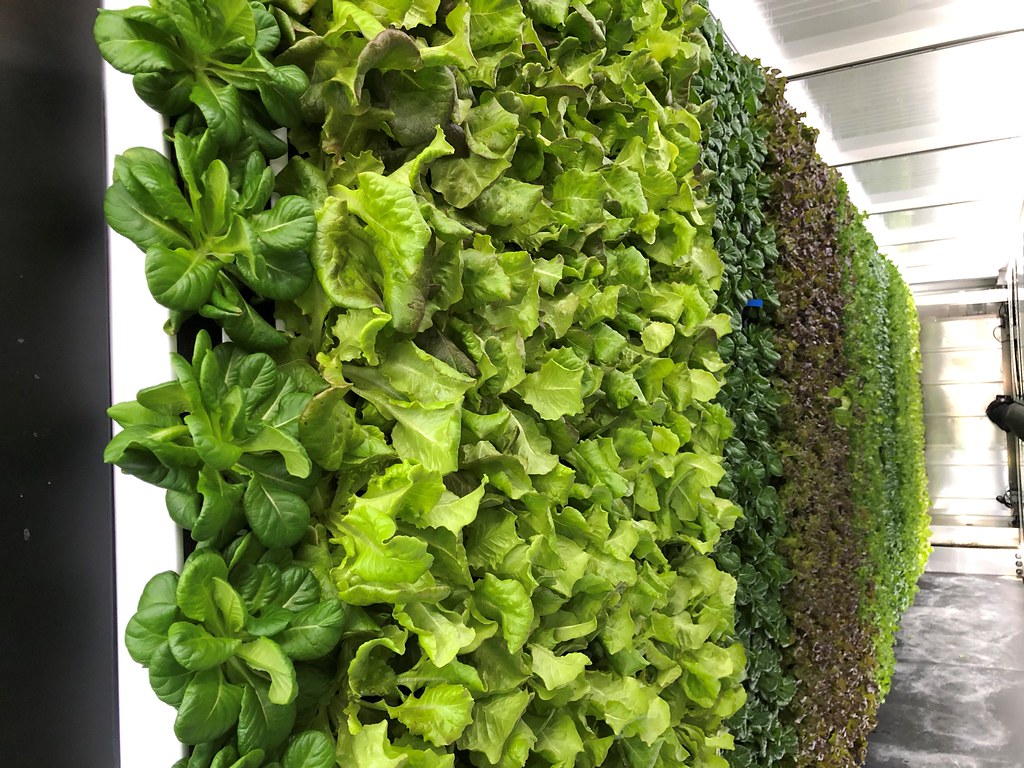 The Morgan Hill hydroponics farm produces 1,000 heads of lettuce every week, enough to cover 60 to 70 percent of the greens used in the district’s salad bars. Photo by Michael Jochner.

As the nutrition director for Morgan Hill Unified School District, Jochner is in charge of meals for 8,400 students, and he’s focused on maximizing nutrition while minimizing the environmental impact of those meals. He didn’t like that lettuce coming from USDA Foods was sometimes so old it went bad before his team could serve it, and he was concerned about agriculture’s impact on the drought-stricken state.

After a months-long process of convincing the school board to fund the project, in October 2021 he installed his first Freight Farm 30 feet away from his production kitchen. The hydroponic vertical farm housed in a shipping container costs about $150,000, and Jochner calculated it would take about 7.5 years to get a return on the investment. It now produces 1,000 heads of lettuce every week, enough to cover 60 to 70 percent of the greens used in the district’s salad bars. It has been such a success that Jochner’s ready to grow more: A second Freight Farm is on its way to him, and he’s applying for a grant to build another 1500-square-foot hydroponic greenhouse to grow cherry tomatoes and cucumbers.

According to Freight Farms, a Boston-based startup that has so far raised around $26 million in funding, there are 16 K–12 schools around the country currently using the company’s technology, in addition to Freight Farm units at several colleges and food pantries.

“I’m really trying to develop a kind of battle plan for other districts,” Jochner says, especially those in drought-stricken regions and urban environments where resources like water and land are scarce. However, getting teachers to use the farms as a teaching tool, especially amidst disruptions caused by Covid-19, has been a challenge for him. He’s working on that side, but it’s not his focus. “I’m going to find the most high-tech way to grow the most salad bar items,” he adds, “and if there are educational benefits, that’s icing on the cake.”

In contrast, at Teens for Food Justice (TFFJ), a New York City-based nonprofit that installs hydroponic farms in schools primarily in low-income neighborhoods, education is at the core of every project. Many of its farms are built directly into empty classrooms, and students at each school tend the crops with the help of a farm manager. TFFJ also provides curricula that cover STEM skills, health, and food justice.

“It’s designed to be a totally immersive experience for these kids, from how you grow the food to why we need to eat differently to why we need to structure our systems around food production differently,” explains Katherine Soll, TFFJ’s CEO and director. “We have the ability to empower a group of leaders with an entirely new way of looking at our food system.”

Of course, Soll says the organization does believe the production at each farm also needs to be high enough to have an impact. Each of TFFJ’s farms produces thousands of pounds of vegetables every year, including spinach, lettuce, and cucumbers, which are used in cafeterias or distributed to students’ families and the surrounding community.

TFFJ now has five farms in New York City public schools, and is in the midst of adding three more on the Rockaway Peninsula, long known for its food-access challenges. Another project in lower Manhattan is also being finalized. In April, TFFJ unveiled its first farm outside of NYC, in a collaboration with Denver Public Schools. Several additional farms are being planned in Denver, and TFFJ is building its first non-school farm in a Denver community center.

The rise of in-school hydroponics builds off the decades of work by school garden programs, including that of Alice Waters’ Edible Schoolyard and FoodCorps, to build outdoor, soil-based school gardens for health and education. And it isn’t always replacing that approach. At Baltimore’s Green Street Academy, the greenhouse grew out of their robust agricultural training program, which includes a small hoop house for growing vegetables, an orchard, and a chicken coop.

Because hydroponic lettuces grow quickly and year-round, the greenhouse will allow the school to produce a volume of food it couldn’t have matched with outdoor agriculture. Reidy says that at full capacity, the students could grow 30,000 pounds of lettuce and herbs. That means the project can be run as a business, which serves the school’s model as a space for entrepreneurship.

Reidy has already purchased produce from the school for two restaurants he owns inside a Baltimore food hall, and he plans to scale up those purchases as the students grow more. He sees it as a way to provide business and entrepreneurial training, but also to fill gaps in funding, given Baltimore City School’s ongoing financial woes. “We would love to generate revenue for the school and the kids,” he says.

It won’t be easy, given that growing food is challenging in any environment, and schools have so many competing priorities. But summer vacation will be over in no time, and the next wave of student farmers will soon get to work on the next generation of basil plants.