For many US cities, building climate resilience also requires reckoning with their racist past.

Chicago was the epicenter of the disaster. At the end of the heatwave, more than 700 of the city’s residents had died of heat-related illness. The majority of the fatalities were concentrated in parts of the city where the built environment intensified the heat — neighborhoods dominated by asphalt, brick, and concrete, and where cascading social and economic factors made residents more vulnerable to the extreme temperatures. In the end, the heat disproportionately claimed the lives of Black, poor, and elderly citizens.

Even within the same city, summer temperatures can vary considerably between neighborhoods.

In the United States, extreme heat already claims more lives than any other type of weather-related disaster — more than floods, hurricanes, or tornados. The heat is also making people sicker. As climate change continues to trigger both higher temperatures and more frequent bouts of extreme heat, city-dwellers are especially vulnerable. Cities are already warmer than surrounding suburbs, thanks to the proliferation of impervious surfaces that absorb and re-emit heat, like concrete sidewalks, asphalt roadways, and brick buildings — a phenomenon known as the urban heat island effect. But even within the same city, summer temperatures can vary considerably between neighborhoods. The layout of urban areas, and more specifically, variations in the distribution of tree canopy and green space, make some communities — typically communities of color — more vulnerable to high summer temperatures.

Some cities are confronting the inequitable distribution of these climate impacts, tracing them to decades of housing discrimination, and pushing for change. Richmond, Virginia is one of them. 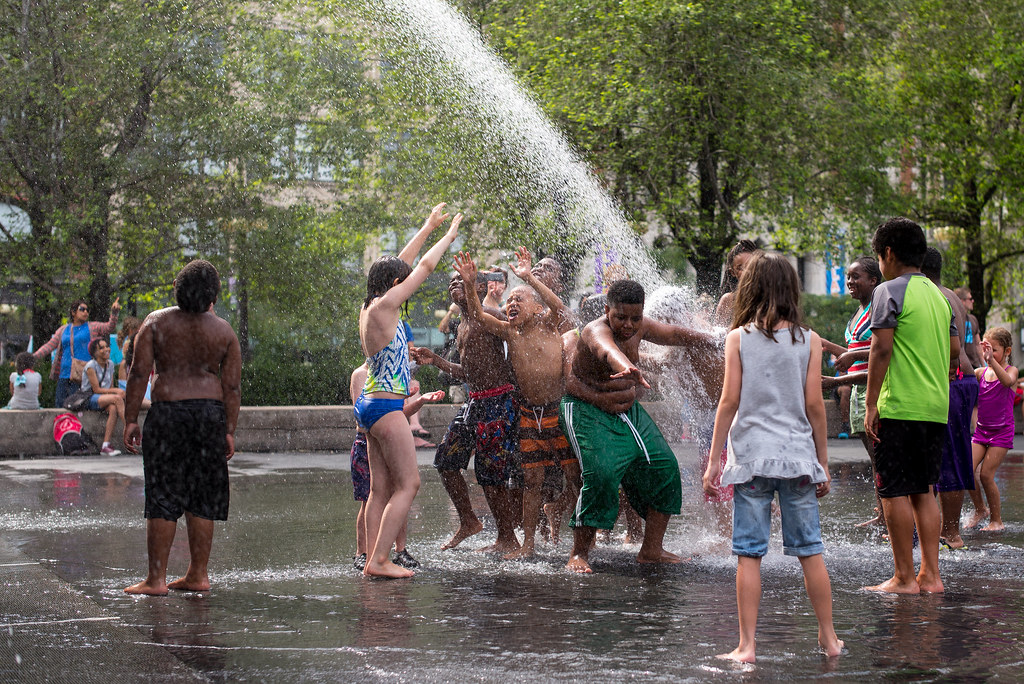 A study assessing 108 urban areas throughout the US found that 94 percent of neighborhoods subjected to historic redlining during the 1930s still exhibit higher surface temperatures than residential areas that were never redlined. The difference? Trees. Photo of children at play at Millennium Park, Chicago. Photo by R Boed.

Spread along the banks of the James River, Virginia’s capital city is getting both hotter and wetter as a result of climate change. The former capital of the Confederacy and the second largest market for enslaved people in the country until the Civil War, segregationist policies were once standard procedure in this river-threaded industrial town. By the early 1900s, Richmond had introduced racist zoning ordinances that made it illegal for a Black resident to buy a house in a majority White neighborhood. These segregationist housing policies were sustained throughout the first half of the twentieth century, when the government entered the residential mortgage market, introducing federal home ownership programs as part of the New Deal — first with the Federal Housing Administration (FHA) and later, the Home Owners’ Loan Corporation (HOLC).

In Richmond, and cities throughout the country, segregated minority neighborhoods were systematically denied federal funding through these programs — a practice known as redlining . And, somewhat more subtly, place-based discrimination was further perpetuated by discriminatory housing restrictions in the form of racial covenants that appeared in home deeds — a strategy used by property developers and homeowners associations to prevent non-White residents from renting or buying homes in some neighborhoods.

A nationwide study assessing 108 urban areas throughout America, including Richmond, found that 94 percent of neighborhoods subjected to historic redlining by the HOLC during the 1930s still exhibit higher surface temperatures than residential areas that were never redlined. The big difference, it seems, is trees. According to another study, published last year, neighborhoods that were subjected to redlining have about 23 percent canopy cover on average. By comparison, neighborhoods that were prioritized for federal funding and never subjected to redlining were found to have nearly twice has much canopy cover, approximately 43 percent. This gap in canopy cover translates to a disparity in the ecological and human health benefits provided by trees, including improved air quality and reduced flooding during storms, along with a reduction in the number of heat-related illnesses and deaths.

Neighborhoods that were subjected to redlining have less tree canopy on average.

Richmond first began looking at the disparities in heat exposure in 2017 with an extensive thermal mapping survey, conducted in the midst of a mid-July heatwave. For a single day, citizen scientists partnered with local nonprofits and researchers from the Science Museum of Virginia and Portland State University to record temperatures in neighborhoods throughout the city. The findings align with nationwide patterns: In Richmond, the city’s formerly redlined neighborhoods, primarily concentrated in the city’s East End, Southside, and Northside, were the hottest. These same neighborhoods had significantly less green space and tree cover than the cooler, historically White, parts of the city.

“The most dramatic finding about heat disparity in Richmond is that on the same day, at the exact same time, air temperatures can be 16 degrees Fahrenheit different between two places within a few miles of each other,” says Jeremy Hoffman, chief scientist at the Science Museum of Virginia and one of the authors of the Richmond heat-mapping study The study also found Richmond’s hottest neighborhoods had more ambulance responses and hospital admissions for heat-related illness during extreme heat events.

“Hotter zip codes have higher rates of heat-related illnesses and emergency department visits for heat-related illnesses,” says Hoffman. “This clearly not only poses a significant health risk, but that translates into a financial burden for these individuals as well as the health care system itself.”

“There are lots of challenges, and we can talk about them in two big umbrellas — one is heat mitigation, or physically lowering the city’s temperature through infrastructural changes,” he adds. “The other is heat management, or responding to heat risks as they happen.”

To that end, the city has used heat-mapping data from the Richmond study to inform its equity-focused climate plan, which included the creation of a Climate Equity Index, an interactive tool launched in 2020 that maps vulnerability to climate change by neighborhood using indicators like income and health. It has also prioritized trees in its citywide master plan, adopted in December 2020, which calls for increasing the city’s canopy cover to 60 percent by 2037, and achieving at least 30 percent canopy cover in every neighborhood.

City initiatives like the Greening Southside Richmond Project are now targeting the neighborhoods most vulnerable to extreme heat for tree-planting programs. The two-year project, launched in the spring of 2021 , offers tree-planting events at parks, community centers, and elementary schools, while providing native trees to residents and free landscaping workshops. It relies on community organizations like Southside ReLeaf to amplify the voices of residents in historically redlined communities, like South Richmond, in project planning.

“Most important is that the communities need to make these decisions with the help of experts — not the other way around,” says Hoffman. “If we, those with the power, in traditionally Whiter, wealthier parts of the city, decide what needs to be done without the voice and vision of those who are disproportionately exposed leading the way, we’re making the same sorts of choices as redlining … just in a different decade.”

Malee Baker Oot is a freelance writer currently based in northern Virginia, just outside Washington, DC. She regularly writes about the capital area’s natural assets. More of her work can be found at www.maleebakeroot.com.