Breathe … Not So Easy

Now that the EPA has defined carbon dioxide as a pollutant under Section 202(a) of the Clean Air Act, we should probably mutter “Beg pardon” whenever we respire. On average, an adult human gulps down 250ml of oxygen per minute and puffs out 200ml of CO2. With 6.6 billion human lungs at work, that adds up to 2.16 trillion tons of CO2 a year.

Humankind’s carbon “breathprint” accounts for as much as nine percent of global CO2 – roughly equivalent to driving 500 million cars. With the UN estimating the world’s population will swell another 37 percent by 2050, all those extra lungs would add another 824 billion tons/year to the human breathprint by mid-century.

Since air-breathing animals first appeared on Earth 600 million years ago, CO2 and O2 levels have fluctuated (in the case of oxygen, from 16 to 35 percent). Before the Industrial Revolution, the human breathprint wasn’t such a concern since every human sigh and shout was part of Nature’s Carbon Cycle. The CO2 we expelled was absorbed by plants; the plants were eaten by animals; the plants and animals were eaten by humans. But when we started burning fossil fuels, we began introducing a huge new load of carbon to the equation – carbon that had been sequestered since the days of the dinos.

As the authors of Out of Thin Air: Dinosaurs, Birds and Earth’s Ancient Atmosphere observe, four of Earth’s “Big Five” extinctions occurred during high-CO2/low-O2 periods and even minor drops in oxygen levels have been linked with “wholesale species disappearances.” Many of Earth’s species are already experiencing massive die-offs while others – from tigers to polar bears – are facing extinction. As the seas absorb excess CO2, ocean acoustics are going haywire. The racket of ship propellers and military sonar is becoming louder, suggesting a future in which deafened dolphins will be dying in progressively carbonated seas. 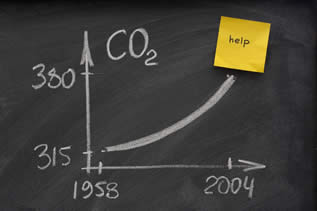 It’s not just our cars and factories that spew CO2. Our appetite for meat is also breathtaking. The Food and Agriculture Organization notes “meat and dairy animals now account for about 20 percent of all terrestrial animal biomass.” Livestock occupy 30 percent of the world’s land surface and generate 18 percent of the world’s greenhouse gases (more than the transport sector). Even worse, cow burps generate vast stores of methane (with 23 times the global warming potential of CO2) and nitrous oxide (296 times more heat-trapping than CO2). Meanwhile, we’ve further disrupted the Carbon Cycle by replacing CO2-storing prairies and forests with sprawling, methane-belching cattle farms.

Because methane remains in the atmosphere for only a few years, the quickest way to address global warming is to reduce methane emissions, not CO2. That’s why Dr. Rajendra Pachauri, the world’s leading climate scientist, has issued a global plea to stop eating meat. (It’s a simple choice: Would you rather have a steak today or a stake in a sustainable future tomorrow?)

Meanwhile, the London School of Economics reports that investing in contraception is five times cheaper than any “green-tech” solution to climate change. (To be effective, contraception must begin in the North, where the carbon footprint of a US teen is 20 times heavier than the carbon bare-footprint of a Kenyan farmer.)

British scientist James Lovelock predicts that a CO2-stoked climate calamity could claim 10 billion lives by the end of the century, leaving only one billion survivors on a blighted planet.

As a reminder of the blessings of breath, one of the best ways to celebrate Earth Day, April 22, would be for everyone to just stop and take a deep breath. With Lovelock’s warning in mind, it’s clearly time to “suck it up” and accept our responsibility for survival of life on this shared planet. We are fast approaching a time when humanity’s next breath may be its last gasp.