Science was always there for me. Now I am there for it.

I grew up in a trailer park in Rixey, Arkansas. Our trailer was broken into twice. I witnessed a murder outside my front door, and more than once, bar patrons from across the street stumbled onto our porch in the middle of the night. I often slept with one eye open when I slept at all.

When Donald Trump — who made no secret of his views on the use of science to inform police — won the 2016 election, Carter felt called to give back, to protect science in some sense. Photo by Becker1999.

While many kids dreaded going to school, I looked forward to it each day. My favorite subject was science, and I was enamored with wildlife. I remember thinking that it was so cool that whales were mammals, not fish, and being fascinated with Carl Linnaeus’s system of nomenclature. Science provided my mind an escape that I desperately needed.

In college, I came out as a gay man — not an easy identity in Arkansas. My family did not celebrate my coming out. Rather, I was shunned and kicked out of the only place that I had ever called home.

While I was heartbroken to lose family, science told me that I was not an abomination. Social scientists told me that there was nothing wrong with me. And my scientific knowledge offered me an escape from Arkansas to graduate school. Science was there for me again.

In graduate school I was able to continue losing myself in my studies of the natural world. But school was also challenging, and I began to find that the science I so admired was difficult to conduct. My experiments often failed, my ideas weren’t always the best, and my scientific writing needed a lot of work. My Southern accent made me seem dumb to colleagues for some reason, so I lost it, something I regret now. I had spent so much time admiring scientific work because it provided me an escape from life’s dangers and stress. But now I began to wonder: Did I really want to be a scientist? 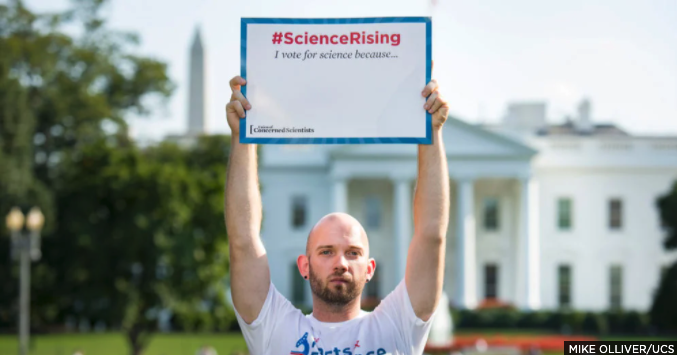 Jacob Carter participating in a “vote for science” campaign ahead of the 2020 presidential election. Photo by Mike Olliver/USC.

The answer, I learned, was yes — just not exactly the type of scientist I might have thought. Through an internship with the White House’s Office of Science and Technology Policy I jumped into the world of policy. I fell in love with the work that I was doing, which involved using science to inform critical decisions on pollinator health and climate change. And I realized that being a scientist didn’t necessarily mean being chained to academia. Science had, once again, provided me an escape.

PhD in hand, I followed my new passion to the Environmental Protection Agency (EPA), where I applied my knowledge of climate change to policy choices that would impact the lives of everyday people. I loved every minute of it: I had found my calling. That is, until Donald J. Trump — who made no secret his views on the use of science to inform policy, particularly climate policy — won the 2016 presidential election. I left my post at the EPA.

But I didn’t turn my back on science. Science had been there for me for so long. Now that it was under threat, I felt like it was calling for me to give back, to protect it in some sense. So that’s what I’ve tried to do.

I soon landed a job that felt crafted just for me studying the intersection of science and democracy with the Union of Concerned Scientists. For the past four years I have fought tirelessly for the use of science to inform policy decisions that affect the health and safety of us all. I have advocated for stronger protections for federal scientists to do their work without political interference, something that’s all the more important given the Covid-19 pandemic. And I continue to conduct climate change research to inform policy decisions, such as estimating future flood risks at Superfund sites.

The Biden administration has brought hope that science will be restored to policymaking, but my work is far from over. I’ll continue to fight for better mechanisms to ensure that science remains independent from the whims of politics, to push for science to inform critical government decisions to protect the health and safety of the most underserved, and to advocate for science to guide our action on climate change.

But I’ll also fight because science might offer another little kid a safe space away from the dangers at home. Science might reassure someone else that their differences are perfectly okay. Science might even lead another Arkansas native down a path to their dream job. Science was always there for me, so now I am there for it.

Jacob Carter is the senior scientist of the Center for Science and Democracy at the Union of Concerned Scientists.