Sharing the Lands we Love

If you’ve never been to the Great Sand Dunes, picture a large crescent of the Saudi Arabian desert plopped down at the foothills of the dramatic Sangre de Cristo Mountains that traverse southern Colorado and northern New Mexico. The tallest dunes in North America, they attract over 300,000 visitors every year. But it wasn’t always that way.

I first visited the dunes in 2002 prior to their designation as a national park. Though I went with my family in the summer during peak tourist season, we encountered only a handful of other hikers. After a two-hour early morning climb, the four of us watched the sun crest the Sangre de Cristos from atop the tallest dune in solitude. Then we sprinted back down and devoured huevos rancheros and pie at the Oasis Cafe, the only dining establishment for miles. As one of just a few parties at the Oasis that morning, we couldn’t help but feel we had the whole area to ourselves.

Since the dunes became a national park in 2004, I’ve returned countless times, and with each trip, I discover more and more people visiting this strange and majestic site. Visitation in 2015 was the highest in the park’s history, with traffic up 20 percent from the previous year. According to Park Ranger Patrick Myers, who’s worked at the dunes for 23 years, stunning images posted to social media have contributed to this spike in popularity.

Now, families line little Medano Creek at the dunes’ base as though it were a beach, setting up with large towels, plastic shovels, and coolers on the soft sand. In fact, visitor numbers ebb and flow in step with the flow of the creek, the conditions of which are updated on the park’s website. To secure a campsite during peak season, you need to reserve six months in advance, or get lucky with first-come, first-served spots. And by night, the ranger-led tour of the stars draws a crowd of glowing smartphone-wielding visitors. 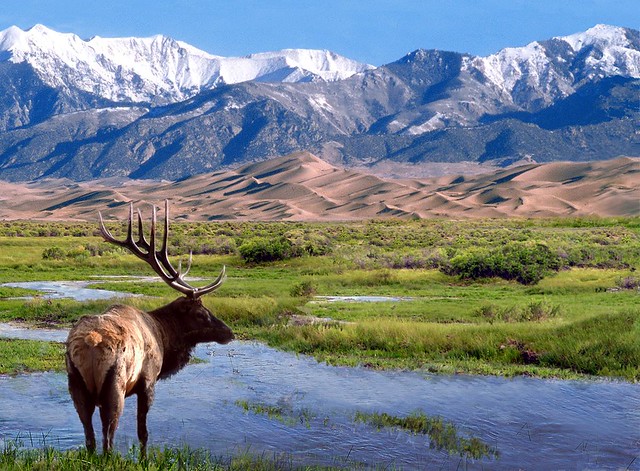 The pursuit of national park status for the dunes first materialized in the 1920s out of concern about onsite gold mining operations in the area. In 1932, President Herbert Hoover signed a bill designating the Great Sand Dunes a national monument. Preservation concerns re-emerged in the 1980s, however, when a water developer began making plans to mine water reserves under the northwest corner of the dunes and pump them to the Denver area. In 2000, a trio of Colorado legislators introduced a bill proposing park status, and four years later – after the government had acquired additional land – the Great Sand Dunes officially became a national park and preserve.

In some ways, I’m happy to see this park designation bring higher traffic to a place I love. I’m even responsible for some of this traffic, having shepherded numerous friends through what I call my “Great Sand Dunes Vacation Package.” A climb to the dune peak. Lunch at the Oasis Cafe. A toe-numbing hike through a frigid creek to see nearby Zapata Falls. Quick photo ops at the Gator Farm and the UFO Tower, operated by local conspiracy theorist Judy Messoline. And then a woeful goodbye to the epic dunes fading in the rearview mirror as we drive away on the pencil-straight Highway 17. I’ve made this circuit more times than I can remember – often in colder months now to avoid the growing crowds – and implored even more friends and relatives to go experience the beauty of the dunes for themselves.

On the other hand, the rising popularity of the dunes saddens me. In a world where few places remain secret and solitary, it’s hard to watch what I once thought of as a hidden gem become a popular tourist destination. Considering the evidence that humans have been visiting the dunes for about 11,000 years, I can’t help but feel a shiver of disappointment when I arrive to beach umbrellas, litter intermingled with the tawny rice grass, and lively groups projecting light and sound at 20-foot increments around the campground.

Is the uncompromising preservation that comes with national park status worth the cost of throngs of visitors? Any answer but yes would be selfishly shortsighted. Still, I can’t help but wish this particular wonder of nature were still a secret at the end of a long road. Luckily, the dunes expand over 30 square miles, and, according to Ranger Myers, 99 percent of the visitors hover around the first three. These days, if it’s solitude you seek, you just have to venture a bit farther for your very own private, and protected, Arabian desert in Colorado.

Maya Silver is a writer based in the West, an editor at DiningOut magazines, and the author of My Parent Has Cancer and It Really Sucks. You can learn more at: mayasilver.wordpress.com.