There is no better time to put forward a bold vision of an expanded park system. 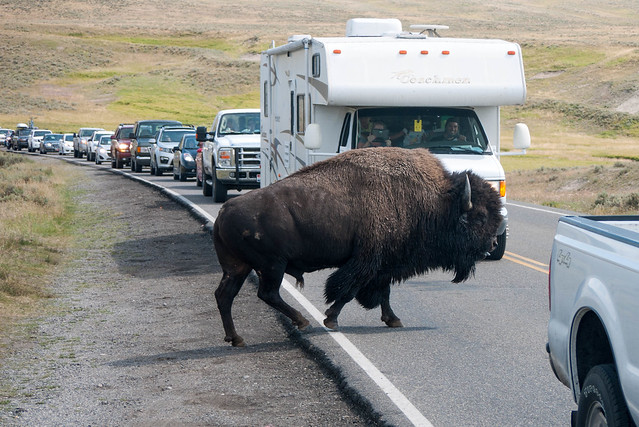 America’s national park system greeted a record-breaking 307 million visitors in 2015. Even more visitors are expected in 2016, inspired by the publicity surrounding the National Park Service’s 100th birthday. Skyrocketing park attendance has brought welcome economic benefits to local communities, but it has also created new challenges. A number of famous parks are regularly experiencing overcrowding, which can diminish the visitor experience and damage portions of our parks.

Some observers warn that our national parks are being “loved to death.” In fact, most public use is focused on a small percentage of well-known or easily accessible destinations, such as California’s Yosemite Valley, the South Rim of the Grand Canyon in Arizona, and Acadia’s Cadillac Mountain in Maine. While sites like these experience the greatest visitor impacts, the majority of parks remain more lightly visited, and more than 50 percent of national parklands are designated wilderness areas.

The National Park Service works hard to mitigate visitation impacts on the most popular parks. For example, access is limited at some sites, and others require reservations. But the root cause of the problem is a demand-supply imbalance. Simply put, demand by people wanting to visit national parks is increasing, but the supply of parks is stagnant.

Only one major new natural-area park – Valles Caldera National Preserve in New Mexico – has been placed under National Park Service management since 1994. During this same period, presidents have designated millions of acres of national monuments under the Antiquities Act. Yet, only about 5 percent of the added monument lands have been transferred to the National Park Service. Most of these lands remain under the authority of the resource extraction-oriented Bureau of Land Management and US Forest Service, leaving them more vulnerable to harmful development.

Less than 6 percent of the land in the lower 48 states is safely within national parks or other nature preserves.

We need to expand the national park system to include many more areas near major metropolitan centers. And we need to create new parks in underrepresented parts of the country such as the Midwest, Northeast, and Southeast. Millions of people would benefit from these expansions through improved public health, reconnection with nature, and better understanding of our cultural heritage. Pressure on existing parks would be relieved, shorter trips to parks would reduce greenhouse gas emissions, and affordable national park vacations would be available to many more Americans.

Expanding the national park system would also be a boon to nature. National parks are the gold standard for conservation. The 1916 Organic Act, which created the NPS, directs the service “to conserve the scenery and the natural and historic objects and the wild life therein,” and to provide for enjoyment of the parks while leaving them “unimpaired for the enjoyment of future generations.” It is no coincidence that most of America’s healthiest ecosystems – such as Yellowstone, Denali, and Glacier – have an expansive national park at their core.

Our existing national park system encompasses some of our greatest natural wonders, but numerous important places – and flora and fauna – remain left out. More than 1,500 American plant and animal species are presently listed under the federal Endangered Species Act, mainly due to human-caused habitat loss. Globally, extinction rates have risen sharply since the start of the twentieth century. Conservation biologists warn that to prevent a “sixth great extinction,” we need to protect as much as 50 percent of the Earth for nature. Yet less than 6 percent of the land in the lower 48 states lies safely within national parks or other nature preserves. Many of our existing national parks do not include whole habitats and ecosystems, and must be expanded while there is still open space beyond their boundaries.

Hundreds of important natural areas across America could qualify for addition to our national park system under NPS criteria for national significance, suitability, and feasibility. Nearly all of them face mounting threats from logging, livestock grazing, drilling, mining, resorts, and other development. National park designation could save these special places from being seriously damaged or lost.

National park system expansion can also play a critical role in addressing the climate crisis. The 2015 Paris Climate Agreement, endorsed by the US and almost 200 other countries, calls not only for cutting carbon dioxide and other greenhouse gas emissions to slow climate change, but also for saving forests, which absorb carbon dioxide from the atmosphere and store it in trees and soil.

A Park that Begs Creating

If you climb to the summit of Borestone Mountain in northern Maine and scan the northern horizon, what you see is a vast, sweeping expanse of forest and mountains, punctuated by lakes and rivers. What you don’t see are cities, highways, smokestacks, or anything at all that can be construed as a town or village.

There is no place else outside of Alaska where so much land is essentially undeveloped, though not entirely untouched, and some want to keep it that way by creating a 3.2-million-acre Maine Woods National Park.

Scientists previously thought only tropical forests were important in alleviating climate change. Now, we know that other forests, including those in the United States, also play a vital role. Our forests remove nearly 12 percent of our nation’s greenhouse gas emissions from the atmosphere each year – enough to offset the emissions of about 170 million automobiles. National parks, which unlike national forests do not allow commercial logging, currently sequester about 17.5 million metric tons of carbon dioxide per year, equivalent to the emissions of roughly 3.6 million cars. Protecting more forests in national parks would greatly increase this figure. For instance, if park designation were extended to federal forests now open to logging, carbon sequestration on those lands would rise by as much as 43 percent over current levels.

An expanded national park system would also assist in mitigating climate change impacts on ecosystems and wildlife. New and enlarged parks could help to sustain native biodiversity by preserving the full diversity of American habitats, encompassing complete ecosystems that are resilient enough to adapt to climate disruption, and providing connectivity between protected places so native wildlife can migrate as their habitats shift. As the climate continues to warm, park expansion would also benefit humans by providing areas of clean air and water, buffering floods and hurricanes, and offering a natural refuge in a changing world.

The skeptics are dead wrong.

The claim that we cannot afford our existing parks is nonsense. Yes, the NPS has reported nearly $12 billion in deferred maintenance costs for park infrastructure. But the supposed NPS “backlog” is a phony “crisis,” manufactured over the last three decades by anti-conservation special interests and their allies in Washington. These anti-park insiders have cynically diverted funds away from the NPS budget, and then piously lamented that, due to the “backlog” they created, there is no choice but to privatize or close existing parks.

Not surprisingly, one of the most unpopular aspects of the 2013 federal government shutdown was the closure of our national parks.

The assertion that we cannot afford new national parks is equally spurious. The National Park Service budget currently comprises a miniscule 1/15 of 1 percent of the federal budget. The average federal taxpayer pays just $2.56 per year – about the price of a cup of Starbucks coffee – to operate our parks. Congress spends tens of billions of dollars annually on subsidies for public-lands logging and grazing, burning of trees for biomass energy, and other wasteful programs. Some of these funds could easily be reallocated to support and expand our parks.

Finally, those who contend that expanding our national park system is politically impossible are ignoring history. Virtually all of our existing national parks were initially opposed by a vocal minority of pro-development and anti-conservation interests. These parks happened because park supporters had the vision and courage to keep pushing until they prevailed over the obstructionists.

Even in these politically divisive times, Americans are united in supporting existing and new national parks. A 2012 bipartisan opinion survey, commissioned by the National Parks Conservation Association and the National Park Hospitality Association, found that 90 percent of respondents supported maintaining or boosting the NPS budget. In a 2014 poll conducted by Colorado College, the park service received an 84 percent approval rating by western voters, higher than any other federal land agency. Not surprisingly, one of the most unpopular aspects of the 2013 federal government shutdown was the closure of our national parks.

The 2016 centennial of the National Park Service is a special event for millions of Americans who love our protected lands. There is no better time to put forward a bold, positive vision of an expanded park system for the century ahead. To this end, a growing number of grassroots groups across the United States have been proposing new and enhanced national parks in their regions. This year, they are coming together to create a New National Parks Coalition to mobilize broad public support that will convince Congress and the president to expand our parks.

The last time conservationists united behind a nationwide grassroots campaign for new national parks was the Alaska Coalition in the 1970s. Working together, citizen activists built overwhelming public pressure that led to the passage of the landmark 1980 Alaska Lands Act, doubling the size of our national park system overnight.

We did it then, and we can do it again.

Michael Kellett has more than 30 years of experience advocating for national parks, wilderness, free-flowing rivers, and wildlife. He is cofounder and executive director of RESTORE: The North Woods.