Six years on, tens of thousands of Angelenos continue to suffer from the fallout of the worst gas blowout in US history.

Communities living downhill from the Aliso Canyon gas storage facility (partially visible amid the hills in the background) weren’t officially informed of the October 2015 blowout for days. Photo by Trekandshoot / Alamy Stock Photo.

CRAIG GALANTI LIVES in Porter Ranch, at the far north end of Los Angeles’ San Fernando Valley, right by where it slopes up into the Santa Susana Mountains. About a quarter mile from his home is an area with rolling foothills, cordoned off by a low fence. A tiny guard house regulates access to the road leading into the hills. “You can see some lights up there at night, but you don’t see any structures from the street,” says Galanti, 60, who works in the “business side” of the entertainment industry.

Galanti has lived in this upscale, suburban neighborhood for about 30 years, but it wasn’t until a massive methane gas blowout sent families fleeing the area in October 2015 that he learned that he was living next door to the second largest underground natural gas storage facility in the United States. “Until the blowout I had no idea of the size of the facility. Nobody around here knew it. It was never disclosed in real estate documents,” he says.

“Until the blowout I had no idea of the size of the facility. Nobody around here knew it.”

The blowout apparently occurred on October 23, 2015, in well at the facility, called the Aliso Canyon storage field, which has 115 wells that can store up to 86 billion cubic feet of pressurized gas. It took the facility’s owner, Southern California Gas Company (SoCalGas), 111 days to cap the well. By that time a total of 109,000 metric tons of methane, a potent greenhouse gas, had spewed into the air. It was the worst human-caused methane release in US history, and Galanti and tens of thousands of valley residents have been living with its fallout ever since.

The problems started right off the bat. People living as far as 12 miles from the facility could smell the gas, but Galanti and several other Porter Ranch residents say impacted communities were never officially notified of the blowout. Which meant that for the first few days, they didn’t know they needed to protect themselves from the emissions.

Many locals suffering from headaches, bloody noses, nausea, and other symptoms, called SoCalGas to report a possible leak, even before October 23, but their concerns were dismissed. “We all believe that gas started leaking before they said it did,” says Kelley Browne, whose family has lived in Porter Ranch since the 1970s, around the time the storage facility was created by repurposing a depleted oilfield.

A December 2015 image of the blown out Aliso Canyon SS 25 wellhead. Photo courtesy of Earthworks. 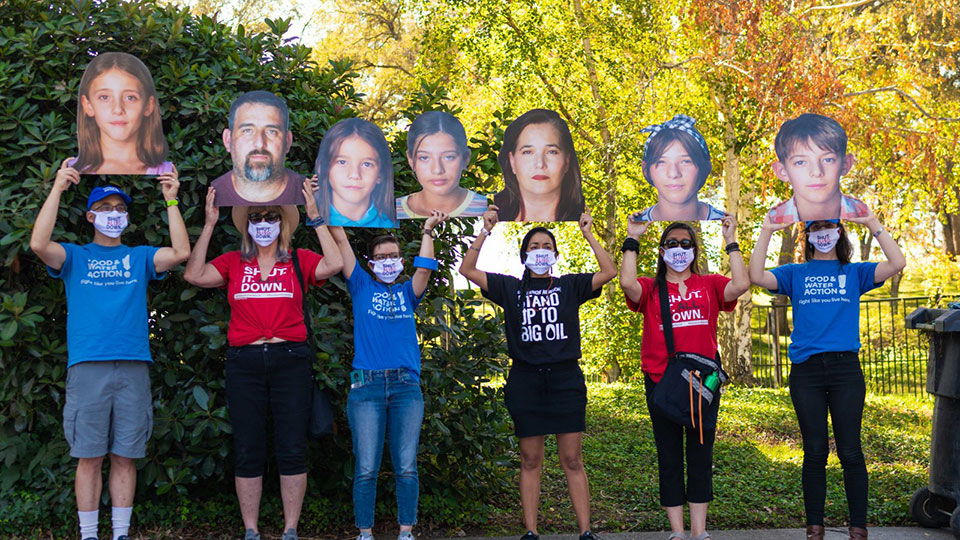 Community members staged a protest outside Governor Gavin Newsom’s home in October 2020 in Fair Oaks to mark the five-year anniversary of the blowout and to remind the governor of his promise to shut the facility down. Photo by Hannah Benet.

Most locals learned of the blowout via news reports, word-of-mouth, or via social media. Eventually, some 8,300 families, including Galanti’s, from five impacted neighborhoods fled their homes to rental houses and hotels outside the area. But Galanti says when they returned six months later, so did their ailments, including nosebleeds that his two sons had suffered from for a long time.

A community survey by public health researchers at the University of California, Los Angeles, found that 63 percent of households in Porter Ranch reported symptoms such as nausea, migraines, bloody noses, and respiratory problems during the blowout and even after it was permanently sealed. The researchers also linked the blowout to the presence of higher levels of other hazardous air pollutants detected in these communities.

The fact is, what gushed out of Aliso Canyon wasn’t, as SoCalGas initially implied, just methane, exposure to which poses no direct, dire threat to public health. The oily mist spewing out of the well contained other chemicals associated with natural gas such as benzene, formaldehyde, toluene, ethyl benzene, and other volatile organic compounds. And since the facility was built in an abandoned oilfield, when the pressurized gas was pushed out during the blowout, along with it came unrefined crude oil particles that rained down on the community for four months. Exposure to these chemicals and fine particulate matter can have dire health impacts, including cancer and neurological and respiratory ailments.

A London-based mining company polluted an Indian port city for decades before a mass-shooting forced its smelter to shut down. Local activists like Fatima Babu are fighting to keep it closed.

“After the blowout we found out that there were heavy metals like nickel and radioactive chemicals like uranium associated with it,” says Alexandra Nagy, California director of Food and Water Watch, an environmental group that focuses on government and corporate accountability.

BROWNE’S AGED PARENTS got so sick after the blowout that they never returned home. In 2016, her mother, Margaret Learman, was diagnosed with multiple myeloma. She passed away in 2019. Browne says it’s not just the blowout, but also the cumulative impact of living for decades next to the leaky gas facility that caused her mom’s cancer. Her father, Richard Learman, is one of about 36,000 plaintiffs, including first responders, suing SoCalGas, seeking some $2.5 billion in damages for illnesses and harm caused by the blowout. The first set of bellwether trials are set to start in January 2022.

SoCalGas has already paid out a $120 million settlement with the city, county, and state for the blowout. Under that 2018 settlement, the utility agreed to pay up to $25 million for a multiyear study of the long-term health consequences of the blowout, and to monitor chemicals in the air along the facility’s boundary for eight years. (In a previous 2016 settlement of criminal charges, the utility paid $4 million to the city for waiting three days before notifying state emergency officials about the blowout.)

Community members are pinning a lot of hope on the health study, which is slated to start in spring 2022, since it could help inform the lawsuits and the fate of the facility itself. But there’s also a lot of concern that the study will not be a fair one. Many say that the LA County Department of Public Health (DPH) hasn’t been fully supportive of their concerns.

“These weren’t just missteps in the fog of disaster; it’s still going on right now.”

“For a long time they were really telling the gas company line that the health effects were minimal and what people were experiencing were mere annoyances, and that there would be no long-term health effects, which outraged the community,” says Nagy. There has been a series of missteps by the DPH, she says, including early on when one of the department’s key physicians sent a letter to area doctors telling them not to do toxicology tests and to look for any other reason aside from the blowout for people coming in sick.

“And these weren’t just missteps in the fog of disaster; it’s still going on right now,” says Galanti, who is a member of the Aliso Canyon Disaster Health Study Community Advisory Group (CAG) tasked with providing guidance and input to the study.

In April this year, the CAG and community members declared “no confidence” in the DPH, which is in charge of the study, and the path the study was on. They called for an “independent, patient-centered, clinical, and long-term” health study instead.

In July, DPH announced it wasn’t going to subpoena SoCalGas because the county and city had settled all disputes with the company in the lawsuits. In a statement to the Journal, the agency said it “understands that there are concerns” and “is committed to ensuring a scientifically based health study that answers the priority questions about the short- and long-term health impacts of the exposures to natural gas and its constituents experienced by the communities impacted.”

Meanwhile, though SoCalGas has been required to operate the facility at a reduced capacity since the blowout, the California Public Utilities Commission (CPUC) has been allowing the company to increase that limit incrementally over time. Aliso Canyon’s use has ramped up by some 3,000 percent compared to Governor Jerry Brown’s last two years in office. (In 2017 Brown asked the California Energy Commission to plan the permanent closure of the facility in 10 years.) Now a group of oil and gas companies is asking the CPUC to raise the allowable gas inventory in Aliso Canyon even further: Storing gas for third party customers is a big revenue stream for SoCalGas.

The facility, which old and built into porous rock, continues to leak gas to this day, Nagy says. That it has been allowed to ramp up its storage “really points back to our regulators and government being captured by SoCalGas money and power and lobbyists,” she says.

Pressure from citizens and advocacy groups is bearing some results though: This past May, the Los Angeles City Council voted unanimously on a resolution urging Governor Gavin Newsom to speed up Aliso Canyon’s closure — something he promised to do while running for office — and in July it voted to tell the CPUC to stop SoCalGas from expanding the site’s storage capacity.

But Galanti isn’t very optimistic about the regulatory agencies doing the right thing, noting that “These regulators have done the community nothing but harm,” he says. Galanti now understands why polluting facilities are usually located in low-income areas. “Here we are, an affluent, highly educated, well-connected community, and even we are struggling mightily [to hold a corporation and our government] accountable. It’s astonishing.”

Stay tuned for more online coverage of this evolving issue.