The Rebirth of Environmentalism:
Grassroots Activism from the Spotted Owl to the Polar Bear
by Douglas Bevington
Island Press, 2009, 285 pages

The Republican gains in the last election, combined with the Obama administration’s inconsistency on environmental issues, has left many greens discouraged. With climate change know-nothings in control of the House of Representatives and even some Democratic senators urging a rollback of EPA powers, the likelihood of progressive environmental laws coming from the nation’s power center looks slim. 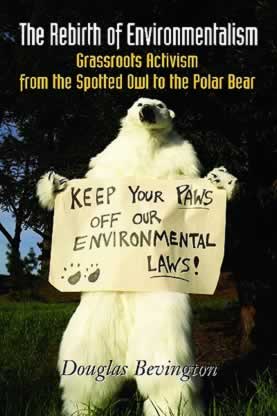 Jared Duval and Douglas Bevington know this as well as anyone. Duval is a fellow at the New York think tank Demos, the former head of the Sierra Student Coalition, and a member of the Sierra Club board of directors. Bevington has been involved with wildlife protection campaigns for more than 20 years, and directs the forest program at Environment Now, a California grant-maker. They are each, in their own ways, environmental movement insiders. And they are both convinced that the best chance for environmental policy gains is going to come from outside the so-called “Big Green” groups. We should be looking to the periphery to find the best new ideas and new strategies for defending Earth, they say.

In The Rebirth of Environmentalism, Bevington provides a detailed study of the rise of local biodiversity organizations in the eighties, nineties, and early 2000s. Some of the most important environmental victories of the past 20 years, Bevington argues, didn’t come from the San Francisco-Washington-New York axis of the Sierra Club, NRDC, and Environmental Defense. Instead, the biggest wins occurred in smaller venues as upstart outfits looked at how they could enforce environmental laws in their home regions. Organizations such as the Center for Biological Diversity, Environmental Protection Information Center, and the John Muir Project (part of Earth Island Institute), charted a middle course between what Bevington dubs “The Nationals” and the radical monkeywrenchers at Earth First!. These groups adopted some of the legal tactics of the Nationals while borrowing the uncompromising spirit of the Earth First!ers. The combination worked. According to Bevington, by 2000 logging in the national forests was at its lowest level in 70 years, thanks in large part to the local biodiversity groups.

Jared Duval’s Next Generation Democracy provides a nice accompaniment to Bevington’s book by looking at the open source spirit that is changing our culture and, if we are lucky, perhaps even our political system. “Open source” refers to the ethos of the early computer programmers who wanted to share their work with colleagues. It’s also the dominating operating principle of the unruly Internet and of our Web 2.0 culture. What Duval wants to know is how this ideal – hyper-democratic, intensely creative – can be transferred to our political system. Duval has some ideas himself; in 2003 he was a college intern on Howard Dean’s presidential campaign, which at the time was discovering new ways of using open source ideals to ignite political activism. To hear what others are thinking, Duval meets with Hurricane Katrina survivors and young people working against the genocide in Darfur to see how they are using open source methods. By the end, he confirms the age-old wisdom that “many minds are better than a select few.”

Duval’s grassroots organizers and Bevington’s legal eagles share a key trait: They have the imagination, and the courage, to pioneer different ways of doing things. The problem with large organizations is that they sometimes become entrenched in the systems they seek to change, and their thinking about what is possible shrinks. Duval’s open source activists and Bevington’s Earth First!-inspired attorneys thrive in terrain of the edge. Unconstrained by expectations, “they do not fear controversy or conflict … and advocate for what is ecologically necessary rather than what is narrowly seen as politically realistic,” in Bevington’s words.

These are important points. My only regret is that they weren’t rendered a bit more elegantly. Bevington’s book is useful as a kind of field guide to the ecosystem of the environmental movement. But it’s also dense, a PhD dissertation turned into a book, and the flood of details (“The September 15th Rally of 1996 and the Deal” is a typical section heading) gets overwhelming. Duval is a more intuitive storyteller, but at points he also succumbs to TMI; I’m not sure I needed Frances Moore Lappé’s life story, for example.

But these are minor quibbles. For the student of social change movements – and especially for the campaigners and community organizers on the front lines of the work – these are valuable books. The history they offer and the insights they include will be useful to activists of all persuasions. Perhaps most important, they are optimistic. They show that there are a host of success stories out there eluding the headlines. You only have to know where to look.