A veteran photographer and conservationist discusses the challenges of nature protection in Russia.

Igor Shpilenok has traveled extensively around Russia, including a 2013 trip from Bryansk in the far west to Kamchatka all the way to the east along the Pacific coast, to document the country’s zapovedniks or “nature reserves.” Photo by Maria Semichaevskaya.

In October 2020, Sergei Krasikov, a forest ranger at the Altacheisky State Nature Reserve in the Siberian region of Buryatia, detained five poachers who had been illegally hunting inside the protected area. For Krasikov, who had been tasked to protect the wildlife in the nature reserve, it seemed like an open-and-shut case. But the confrontation turned violent, and, eventually, Krasikov himself faced criminal charges for abusing his authority and was threatened with up to ten years in prison.

According to the case report, Krasikov had struck one of the poachers with his rifle butt and fired a round at another. As the case developed, however, public investigations revealed that Krasikov wasn’t the aggressor. In fact, the poachers had attempted to run Krasikov over with their vehicle, giving him a concussion and two broken ribs. The poachers, as it turned out, had friends in high places, which gave them leverage to sue Krasikov.

In April 2021, the charges against Krasikov were dismissed after the case’s investigation received public attention. But, Shpilenok points out, Krasikov’s case isn’t unique. Many rangers and conservationists in Russia face similar intimidation and harassment.

Shpilenok started his career at the Bryansk Forest Reserve, near the border with Ukraine and Belarus, where he ventured into wildlife photography. He has traveled extensively around Russia, including a 2013 trip from Bryansk in the far west to Kamchatka all the way to the east along the Pacific coast, to document the country’s zapovedniks or “nature reserves” — federal reserves with strict protections against human intrusion (other than for scientific research) and resource extraction.

Earlier this year Shpilenok spoke about the Krasikov case and how it illustrates the difficulties of giving true protection to Russia’s wildlands.

What is your takeaway from Krasikov’s case?

Unfortunately, this is not a unique case of poachers protected by powerful interests attempting to turn the accusation back on Krasikov himself. Let’s take another case: Say we are trying to detain a poacher in possession of a dead wild boar. We call the police dispatcher, and the excuses begin: We don’t have any fuel; we only have one team; no one is available. We reply, We will fill your tank, just come. They drive to the end of the paved road armed with automatic weapons, but in street shoes. The location is remote and requires sturdy footwear — we had warned them in advance. In my experience, only one or two cases out of every ten are actually prosecuted. These cases are pursued unwillingly, and often the powers that be end up supporting the poacher instead of the rule of law.

A brown bear swims amid a school of salmon in Kuril Lake in the South Kamchatka Wildlife Reserve in the Russian Far East. Shpilenok lived in a cabin in southern Kamchatka for nine months to study the remote region’s wildlife. Photo by Igor Shpilenok. 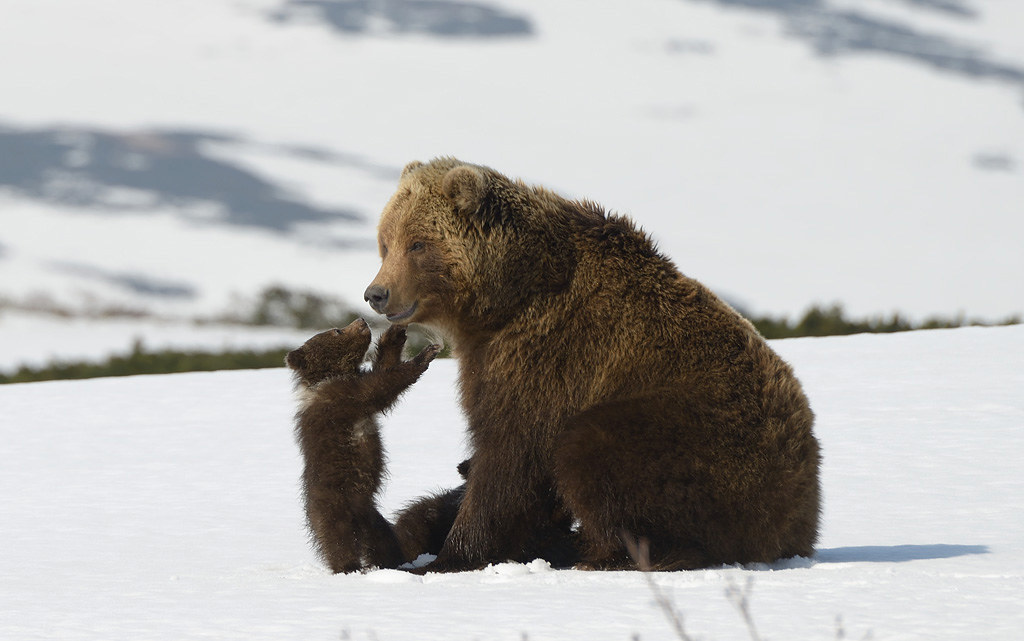 Remote parts of the Kamchatka Peninsula are home to robust brown bear populations, though the animals face threats from poaching, road development, and more. Photo by Igor Shpilenok.

Things are further complicated by the fact that law enforcement officers are typically hunters themselves. I once encountered a group of 14 poachers, seven of whom were members of local law enforcement. The whole thing was caught on video, with witnesses, but they still managed to stifle the case. We have only very weak tools with which to hold poachers accountable. And today’s problems stem from an older problem: For the Russian state, nature protection is last on a list of priorities. We have a Ministry of Natural Resources and Ecology, but its definition of the word “ecology” went astray somewhere. For a long time, the ministry’s logo portrayed an oil rig. You can change the logo, but resource-focused thinking remains the same in ministry leadership.

You would think that there would be a standard for enforcing hunting laws. What other barriers are there to halting poaching?

Of course, there are reputable protected area directors who can find common language with law enforcement. And poachers with limited social capital are easier to halt. The police are pleased to cite ordinary people, but if a poacher has status, that is when the situation gets dicey. Some people see poaching as a folk tradition instead of a criminal act. Especially in remote regions, stealing has often been necessary to survive. Steal from the master, then from the state. People might see poaching as a means of protest against an unjust world order. Enforcement agencies understand this completely, so only a small fraction are prosecuted. But over recent decades, almost no game wildlife is left to hunt outside the borders of national parks and zapovedniks. These animals have been hunted out of existence in unprotected landscapes.

In the 1990s, after the Soviet Union collapsed, workers from defunct industrial and farm collectives learned how to live off the forest. They set snares and traps; in the Far East they collected ginseng and other medicinal plants. Many of them do not want jobs, preferring instead to live by the saying: The forest is our pantry.

For others, hunting is its own type of sport. They listen in on two-way radios and try to “befriend” protected area employees in order to figure out if the latter have night-vision capability. They kill just a few deer each year but can boast about how beautifully they evaded enforcement.

The scariest activity, however, is commercial poaching. It is found only in places with a tremendous stock of natural resources. For example, there is now a relentless fight over an endangered whitefish species called omul at Lake Baikal. Even though the fish is endangered, it’s considered a delicacy and supports a large illegal fishery. People are even taking out loans to buy fishing boats and navigational gear! When such poachers get to work, they aim to buy their way out of sticky situations and operate under political cover.

In the Far East, where there are valuable fish and caviar stocks, fur, and bear bile, poaching is very difficult to control. Chasing after poachers is romantic, but the results are pitiful. Poachers will break the law until they have taken every last animal. That is what happened with the saiga antelope: It was almost completely extirpated, and herds of millions have been reduced to a few thousand animals. These population catastrophes have no impact on poachers. When the resource declines, prices go up. This is a segment of the shadow economy, one with its own laws. This level of poaching can only be fought at the government level or by changing the area’s economics.

Aerial view of a small lake on a volcanic plateau in Kronotsky Nature Reserve on the coast of the Kamchatka peninsula. Photo by Igor Shpilenok. 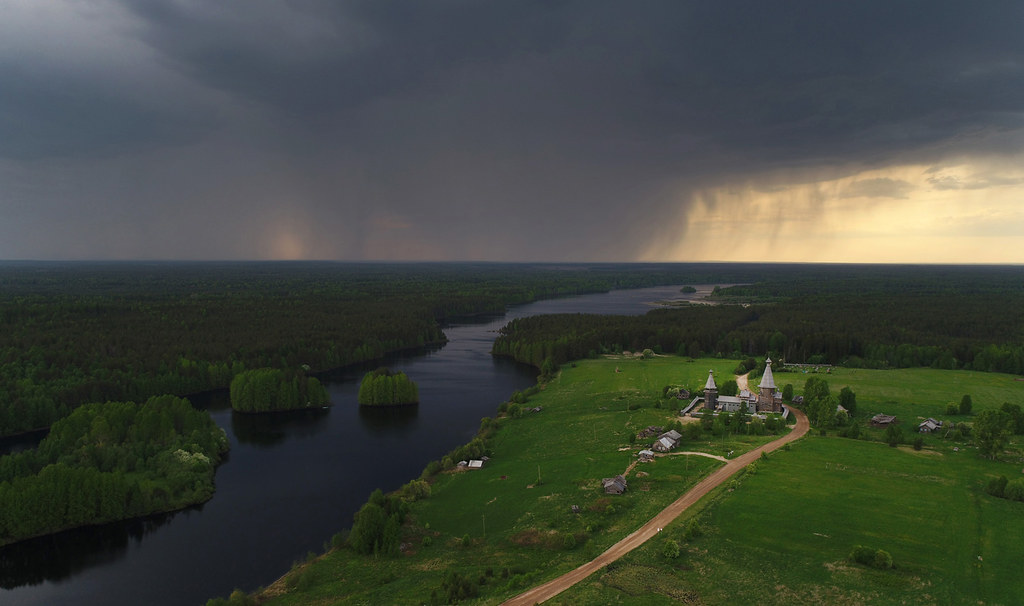 A few years ago, you traveled from west to east across numerous federal zapovedniks and national parks. What were some of the key takeaways?

I was surprised by Siberia. I thought it would be endless forests and plentiful wildlife. But that’s just not what I observed, with few exceptions. One of those exceptions is the Altacheisky refuge, where Krasikov lives and works. The rangers there are not protecting that landscape for the money. Rather, they see it as their duty, a service to the state and society. The situation with Krasikov’s arrest hit a sort of societal nerve. When I first wrote about Krasikov, my story was shared by over 5,000 people. The case touched the hearts of not only park rangers, but all of society.

Today, zapovedniks and national parks exist thanks only to the enthusiastic caring of a few people working for miniscule salaries. Rangers receive the largest salaries: up to 18,000 rubles ($245) per month. The inequity is highlighted when this is compared with the enormous salaries given to senior officials in the military-security establishment. Parks workers also protect the Russian homeland. It is also absurd that their weapons — tools necessary in their dangerous line of work — are generally locked away. Half of all zapovedniks do not arm their rangers at all when it comes to anti-poaching work.

Today, zapovedniks in Russia are required to generate income from tourism. Is this requirement reasonable or even possible?

Zapovedniks are ready to take this on. But tourism must be sustainable in nature, and today, the government is advancing the most destructive types of tourism, like building ski resorts and undermining effective leadership at certain protected areas. This is a time-tested scheme — bringing in security forces to fill in any perceived “gaps.” Few are defending these protected areas, just like no one would have defended Krasikov if civil society hadn’t sounded the alarm. Poachers know that the state is uninterested in safeguarding protected areas and wild animals. But if the state made an example of those seeking to destroy the natural environment [by convicting and punishing violators], matters would be different.

Today, Russian civil society is fighting to create a government agency to manage protected areas. Without such an institution, there is not really any point to discussing these issues. The last 25 years have shown that the Ministry of Natural Resources and Ecology is not coping with the challenges and that protected areas management is failing. A quarter-century ago, the state aggressively exploited natural resources and sold them off. Not everything survived the damage done, and today we can only reserve what remains of wild nature.

A version of this article originally appeared in Ecology and Business, a Russian-language environmental journal based in Vladivostok, Russia. It is republished here as part of a collaborative journalism initiative between the publication and Earth Island Journal.

Alexander Dybin is a journalist with the Russian news site Znak.com. This interview has been translated from Russian by Jennifer Castner and edited for clarity.