In the Teton Range, “You See a Lot of Charity but Very Little Justice”

Sunset at Grand Tetons seen from the border of Idaho and Wyoming. Photo by Kartik Ramanathan.

If you’ve ever been to northwest Wyoming, you’ve seen what many consider to be the heart of the American West. Here, snow-capped mountains tower over cirques and river valleys. Grizzlies and elk pass through the pines, and bison herds roam the grasslands. It’s a mythic landscape — one that inspired artist George Catlin to come up with the idea to create a “nation’s Park,” setting a standard for land conservation in the centuries that followed.

Some argue that this is the most beautiful area in the United States. It’s also, not coincidentally, the most unequal.

In his new book Billionaire Wilderness: The Ultra-Wealthy and the Remaking of the American West, Justin Farrell calls Teton County, Wyoming, a “living laboratory of extreme wealth disparity.” The top 1 percent of residents of this county make an average annual income of $28.2 million. This is the highest among all US counties. The top 1 percent also make 233 times more than the rest of Teton County’s population, signaling the country’s largest income gap.

A native Wyomingite and sociologist at Yale University, Farrell enters into the depths of this “living laboratory” to explain how wealth disparities develop at the crossroads of ill-fated tax policies, wealth concentration, and misdirected philanthropy. He interviewed Teton County residents, pored through IRS and census documents, and analyzed these data to help explain what that process looks like on the ground. The result is a biting critique of conservation and wealth in Teton County as representative of an increasingly unequal “New West.”

To start, Farrell explores the origins of Teton County’s inequality. Migration to this rural community seems relatively easy to explain. The area’s natural beauty and complementary infrastructure lure in wealthy transplants. Jackson Hole promises a natural playground of ski slopes and mountain bike trails for outdoor enthusiasts hoping to escape the money-making grind of the cities on either coast.

Telecommuting has also enabled many Wall Street financiers and Silicon Valley CEOs to conduct business from their homes in Jackson, or even from the slopes. (One interviewee, a medical device investor, remarked that he often took conference calls on the mountain.) This has led to a rapid change in the kind of money that is made in Teton County: Since 1970, income from the investment sector in the county has shot up from $52 million to $3.4 billion — an overwhelming 6,500 percent increase. But in that same timeframe, income from service and working class jobs has remained relatively stagnant, increasing just 2.8 percent. 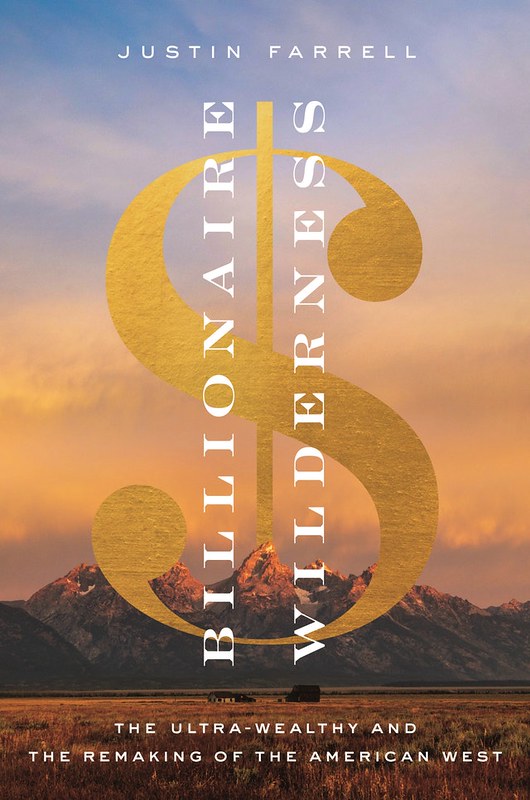 Farrell’s book points to a dark side of environmental conservation, where the region’s mythos as a quintessential Western landscape takes precedence over social issues Photo courtesy of Princeton Press.

Plus, or perhaps primarily, the wealthy move to Wyoming for its lenient tax policies. The state does not collect personal income tax nor does it levy a corporate income tax, writes Farrell, “because of Wyoming’s long standing anti-federalist cultural streak that has created an all-out aversion to new taxes.” As Farrell suggests, a tax haven in paradise is a sweet deal for “those at rarefied heights,” even if moving there makes life increasingly unaffordable for those at the bottom.

But that’s only part of the story. As a sociologist, Farrell interrogates the everyday attitudes of the haves and the have-nots that might be perpetuating, or exacerbating, the wealth disparity. Here, his research points to a dark side of environmental conservation, where the region’s mythos as a quintessential Western landscape takes precedence over social issues, at the expense of many of its human residents.

Some count Jackson among the country’s most philanthropic communities, on account of its high number of nonprofits per capita and the millions of dollars the ultra-wealthy contribute to such organizations each year. But Farrell, who traces where these charitable donations go, sees an imbalance. “The purpose of philanthropy [in Teton County] is ... to protect ‘this special place,’” he writes. “Any issues that are not related to the environment or arts are viewed as what I call ‘buzz-kill’ issues, and receive less charitable attention because they cast the long shadow of reality on this rural Western paradise.”

In other words, as one interviewee expressed it to Farrell, the wealthy “take care of the wolves more than the Latino workers in this community.” Another interviewee remarked that in Teton County, “you see a lot of charity but very little justice.”

Here, Farrell’s research “cracks the veneer” that all environmental conservation is an absolute altruistic good. In some instances, he writes, “conservation can become a tool for economic gain, social prestige, and exclusion.”

In the 1930s, John D. Rockefeller, Jr. — the oil magnate’s son — spent part of his family’s fortune to buy up land that would eventually become much of Grand Teton National Park. Through what Farrell calls the “new Rockefeller” paradigm, many landowners in Teton County today set up their land as conservation easements, which saves the land from future development while delivering huge tax deductions.

But often omitted from Rockefeller-type stories of successful land conservation are the effects on nearby communities. Close to town, a recent spike in conservation easements has created a crunch on affordable housing, forcing those at the bottom to move out of town as those at the top secure the landscape — and make money doing so. (Also often omitted from these “success stories” are the extractive, environmentally destructive ways the ultra-wealthy made their money to begin with.)

Here lies the dilemma at the heart of Teton County, where a certain brand of conservation has benefitted a certain group of people, for a certain purpose. In many ways, this points to the dilemma of conservation itself. Though often misinterpreted today, when George Catlin imagined the “national park idea,” his vision included preservation of the landscape as well as its Indigenous inhabitants. He didn’t imagine that his idea — while necessary to protect much of the American landscape from the westward push of an industrial society — would also count among the land-use decisions that historically and currently are used to exclude people from their homes.

In many ways, Billionaire Wilderness can be taken as a challenge to the ultra-wealthy — to check their impact on nature, people, and place — and a challenge to the policies that enable the rich to get richer while the poor suffer. But Farrell’s research also offers a challenge to the legacy of conservation itself, particularly as environmentalists work to reconcile ongoing errors of racism and exclusion while still protecting landscapes and wildlife that need protection.

There are no easy answers in Billionaire Wilderness, but the book raises the question: When we protect the environment, whom are we protecting it for?

Austin Price is a journalist covering conservation, climate change, agriculture, and natural history. He is a contributing editor at Earth Island Journal.