STANDING IN HER GROUND-FLOOR East London flat, where builders are in the throes of laying floor tiles, Rosannah Smith motions to the bubbled, water-marked linoleum on the kitchen floor and damaged paintwork around the skirting boards. “The water just came pouring in,” she says, recalling a deluge in July 2021, when a series of downpours swept across London. The rain turned streets into rivers of muddy floodwater that ravaged houses, cars, and businesses. 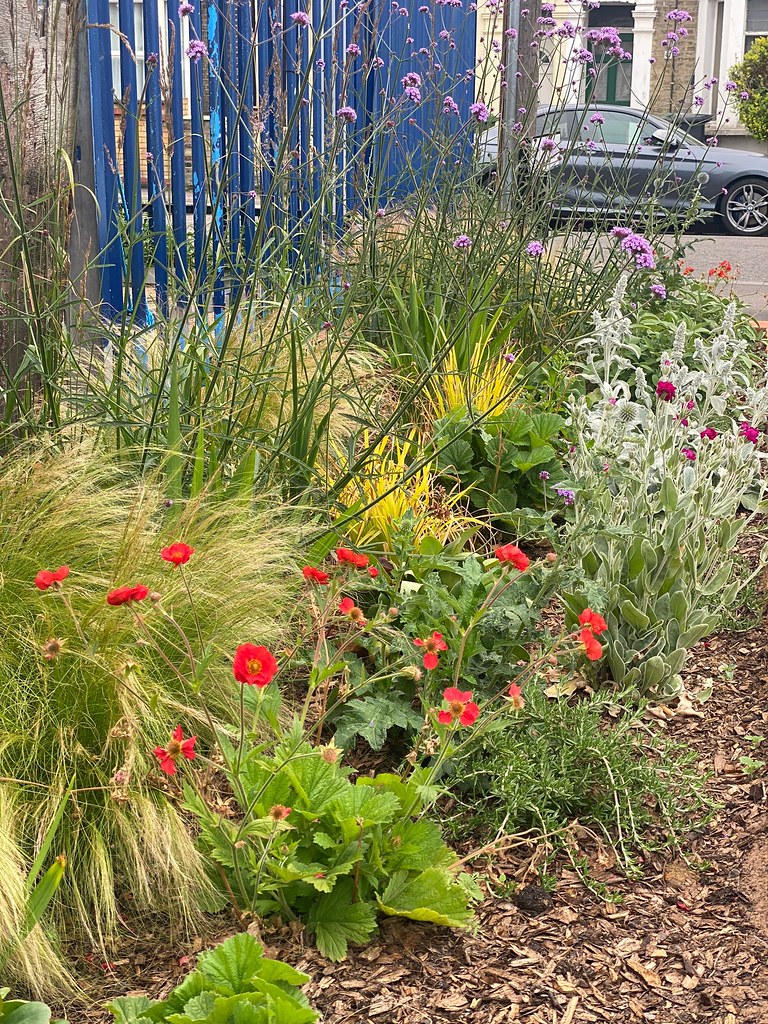 “It came through the door, came through [the garden], and it came up through some people’s floorboards. I’ve got cement floor, so I was lucky. But it just came so quickly.” The flooding destroyed irreplaceable mementos — from university, from travel, from work abroad — but Smith has resigned herself to such events, flood-proofing her home where she can. “After the fourth time,” she says, as we walk through to her living room, “I mean this was the worst. And with climate change, things are just going to get worse and worse and worse.”

As unpredictable weather and extreme rainfall become the norm, cities like London are facing increased flash flooding. England’s Environment Agency estimates that 235,000 residential properties in London alone are now at a high risk of surface-water flooding. Here, as elsewhere, common building materials like asphalt, brick, and concrete, the very foundations of urban development, are proving incompatible with a changing climate. London, a city of just over nine million, is particularly vulnerable. It has an inefficient Victorian drainage system and outdated methods of water collection, such as underground storage tanks that are both expensive to maintain and inadaptable to intensifying rainfall. It also uses up to three times as much concrete as other cities in the UK. To planners here, the need to better integrate flood resilience into urban infrastructure is increasingly apparent.

Integrated flood management — a mix of hard and soft defense methods — may be the key to London’s ability to cope with extreme weather. As a city that could be partially underwater by 2050 under current climate projections, infrastructure must both withstand and minimize floods. Rain gardens — shallow depressions in the ground filled with plants like fern, soft rush and other native shrubs — are being rolled out across the city to help take mounting pressure off its drainage system and to enhance climate resilience, collecting run-off from roads, roofs, and other hard, grey city surfaces.

ON A WARM MORNING IN early June in Leytonstone, East London, not far from Rosannah Smith’s home, jackhammers growl as they tear up concrete on a residential street, a sign of progress towards natural infrastructure. At the end of the street, workers are building a “sustainable urban drainage system,” or SUD, where rain gardens and trees will replace pavement and parking. In SUDs, water will run into shallow depressions filled with bog and drought-tolerant plants, draining through grit-heavy soil and coarse aggregate.

“SUDs are much more sustainable and effective at minimizing the risk of surface water flooding when compared with traditional drainage systems,” says Simon Crowther, a London- and Nottingham-based chartered water and environment manager. These systems “imitate nature and the natural catchment of an area by managing rainfall and water close to where it falls.” The city’s existing systems, he says, were not designed for long-term sustainability. “Instead, they are just transferring water elsewhere, which can often cause problems for these areas, along with the areas where the rainwater initially fell.”

Rain gardens, a key element of more sustainable systems, work as an absorbent layer between impenetrable city surfaces and traditional drainage systems. “They store excess water, transfer it safely without affecting neighboring areas, attenuate the water before it returns to watercourses, and allow it to soak into the ground as naturally as possible,” Crowther says.

Where cities find themselves at a higher risk of flooding, rain gardens offer a level of fortification: reintroducing the steady, natural drainage of green spaces lost to urban development, as well as mitigating the causes of inner-city pollution and making natural spaces accessible. In these corners of London, planners are building “sponge cities,” such as those built in China. Bit by bit, they are heeding the wisdom of a leading sponge city designer, Yu Konjian, who has famously championed green solutions to grey city problems. “You cannot fight the water,” Yu says. “You have to let it go.”

Waltham Forest, the borough that houses Leytonstone, has been building an evolving network of rain gardens since 2015. Planners here are currently rolling out new plots as part of a wider local initiative, called the Business Low Emissions Neighborhood. Sustainable drainage plays a huge role in responding to changing weather patterns, Clyde Loakes, a Labour Party councilor, says as we walk through the neighborhood. Pointing out a row of houses with block-paved frontages, Loakes describes the impact of ridding residential streets of vegetation. “Our Victorian drainage systems can’t cope with the sheer amount of water that downpours now because so many people have paved over their front gardens, whether to store their cars or just to store bins,” he says. “Water will find its way into a property if it possibly can, and even if you can just create a couple of millimeters extra time and drainage [with gardens], then that helps.”

In the neighboring town of Walthamstow, where gardens are more established, they provide rare pockets of biodiversity. Rain gardens here have become mini urban jungles, where children bound through tall reeds and wildflowers on their way to school.

Rain gardens also function when it isn’t flooding, cleaning the air, making neighborhoods more walkable, and reducing vehicle traffic, which is of great benefit to places like East London, which known for its oppressive levels of air pollution. In Leytonstone, rain gardens are built in conjunction with small parks, cycling tracks, and other green features, which limit car parking and incentivize low-emissions transportation options. “In the morning,” Loakes says, “you’ll just see people walking down the middle of the road with their kids, people scootering and cycling. It’s such a joy.”

Abigail Spink is a freelance environmental journalist based in London.