When Planet Earth II aired in 2016, it ended its remarkable six-episode run with an hour-long segment on cities. Having been transported to the remotest corners of the Earth in the earlier episodes, I worried that the finale would be a letdown, a depressing reminder of humans’ capacity to wreak destruction. I couldn’t have been more wrong. The episode was full of incredible examples of fauna and flora not just surviving in cities but thriving. (If you haven’t seen the clips of peregrine falcons bombing down from New York City skyscrapers, I recommend you find it online immediately.) 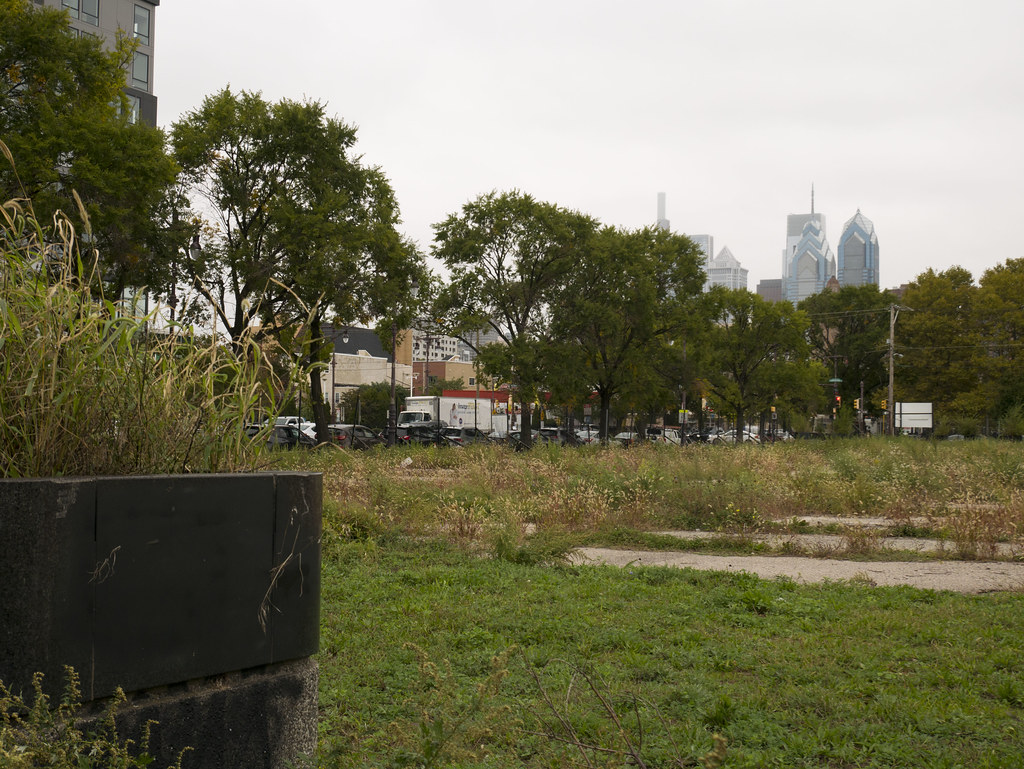 An empty lot in Philadelphia. Marginal lands like these often contain the most novel assemblages of life and that help make cities, counterintuitively, so biodiverse, the author argues.Photo by Molly Des Jardin.

Just as in that episode, visions of cohabitation of humans and nonhumans are found throughout Matthew Gandy’s new book, Natura Urbana. Gandy, a human geographer at the University of Cambridge, brings together ideas from disparate fields, ranging from conservation biology to queer theory, to explore the multilayered meaning — tangible, symbolic, and cultural — of urban nature.

Unsurprisingly, the book spends a lot of time interrogating what qualifies as urban nature, from the “controlled contours of metropolitan nature” — like parks and manicured greenways — to the “spaces of spontaneous nature” springing forth from vacant lots and sidewalks. Gandy is interested in the latter, the “marginal or interstitial spaces of urban nature” that he fondly calls wastelands. It’s these pockets, he argues, that often contain the most novel assemblages of life and that help make cities, counterintuitively, so biodiverse. More importantly, it’s in these pockets that people encounter nature on a daily basis and can imagine “new cultures of nature” through grassroots science, experimental landscape design, and animal ethics.

As a Londoner trained in part in what he calls the “island city of West Berlin,” Gandy is particularly interested in the postwar, industrial landscape of Europe. But he finds these beautiful wastelands in almost every continent, providing evocative examples to challenge the preconception that these pockets are victims of, as he writes, the “homogenizing tendencies of modernity,” and thus less important or valuable. Exploring trains of philosophical and biological thought on hierarchies of nature, Gandy pushes instead for an appreciation of an “ecological pluriverse that can encompass both brownfields and rainforests.”

If you’re looking for Planet Earth II in written form, though, I’m afraid you’ll be disappointed. Compelling anecdotes are diluted by longer discussions of political theory, and though the book is sprinkled with interesting photos, their impact is lessened by the fact that they’re all in black and white. At the end of the day, Natura Urbana is a highly academic analysis of different theories of urban nature, one a reader might feel they need a dictionary to get through.

“Part of the challenge in writing this book is to explore whether a broadly neo-Marxian framework, originating under the metabolic lens of urban political ecology, can withstand a sustained engagement with other intellectual traditions,” Gandy writes in the preface. If that sounds like your kind of book, you’re in for a treat. If not, though, Natura Urbana still provides no shortage of interesting ideas. I was left thinking less about the meaning of nature than about the meaning of cities. By exploring the spaces where nature “sneaks” in, Gandy highlights the fuzziness of the border between cities and the land beyond. Consider Phoenix, for example, which relies on vast amounts of distant, exploited “ghost acreage” as Gandy calls it, to sustain itself, or London, which was declared a national forest in the early 2000s because of the amount of tree cover it has.

My favorite example was of a Mediterranean species of fig tree found outside the industrial city of Sheffield, England. Scientists discovered that sewage had carried the nonnative seeds from the city into the valley below, where steel factories in need of cooling water kept one stretch of river at a steady temperature. This allowed the fig trees to thrive. Such spontaneous urban nature tells the story of the city. It becomes a historical archive that, as Gandy writes, “dispels artificial distinctions between the city and its constitutive elsewhere.”

In an era of interest in utilitarian approaches to urban nature like green infrastructure, we’ve become focused on using nature to make the urban environment more livable. What Gandy forces us to see is that nature, beyond our design, is already written into the very fabric of the landscape. It doesn’t make cities more livable. It just makes them cities.