In Malaysian Borneo, local communities are fighting to safeguard their land from logging in the face of corporate intimidation.

Last December, timber giant Samling’s COO James Ho Yam Kuan wrote in an opinion piece in a popular Malaysian online news site that he was “scandalized” by accusations that the company was engaging in unpermitted logging. The accusation was made by residents of the remote Indigenous village of Long Pakan in Malaysian Borneo. He probably didn’t expect the community to come back with photos, videos, and satellite images substantiating the claim. He presumably didn’t expect the story to get picked up by international conservation groups and covered by the local media, or for the village to post a video on social media that would be viewed tens of thousands of times, either. But that’s exactly what happened.

Evidence shows that in August 2021, Samling began building a logging road on Long Pakan land and removing trees to prepare for its logging operations, despite the community at large staunchly opposing the operation. Community members were quick to file a report with the police. When that went nowhere, they set up a blockade in response to the threat. Villagers say the company failed to obtain free, prior, and informed consent from the headman and many community members who oppose the logging. Rather, villagers say, the company relied on a handful of young people, some of whom are presumably under its employ or have been promised employment, to claim that consent had indeed been obtained.

In a statement, village headman Pada Jutang said, “We are not happy when the company continues to work because the forest will vanish, forest products are difficult to find … and the polluted water and soil erosion cause the fish to die.”

The residents of Long Pakan, members of the Penan ethnic group, are speaking from experience. Many Penan communities have held on to much of their forests through decades of resistance, while watching others downriver trade away their land for short-term gain, or have it swept out from under them when licenses for logging and oil palm plantations have been doled out by the government and treated like free passes.

The Baram River basin, where Long Pakan is located, contains the largest area of unprotected primary forest left in Sarawak state, which stretches along Borneo’s northwestern coast. The forest there is home to dozens of threatened species such as the pangolin, gibbon, binturong, sun bear, and clouded leopard, as well as six different species of hornbill.

The region is subject to a patchwork of timber concessions, where so-called sustainable logging is taking place. Some of the concessions have been certified by the Malaysian Timber Certification Scheme (MTCS), which is in turn certified by the international Programme for the Endorsement of Forest Certification (PEFC). MTCS says its program — which requires an internal audit as well as surveillance as part of the certification process — considers environmental, social, and economic impacts of timber operations. It also requires the consent of Indigenous stakeholders. But locals say that timber that doesn’t meet these criteria is frequently rubber-stamped as clean and green, labeling which makes it ideal for sale in the United States and Europe. In reality, operations certified by these programs have a host of issues, including failure to consult communities or to adequately obtain consent.

Communities on the ground have been pointing out these deficiencies with increased rigor and reach in recent years. Unfortunately, their campaigns have not gone unpunished. In October 2020, another Baram community, the Kenyah community of Long Moh, similarly discovered Samling logging outside of approved areas as part of a MTCS-certified operation. (Samling’s Long Pakan operation, however, isn’t certified by MTCS.) The community responded with nonviolent resistance. “We staged a peaceful protest, putting up banners along the entrance to their campsite,” community member William Tingang said at the time. “We want Samling to know that we are utterly upset with their action.”

Samling continued to deny the claims and sent the community an intimidating letter saying they had done nothing wrong. Long Moh contacted local advocacy group SAVE Rivers looking for help to hold Samling accountable. SAVE Rivers has actively supported Indigenous communities fighting for land rights and forest protection for years.

Locals allege that in the Baram River basin, timber that doesn’t meet certification criteria is often rubber-stamped as clean and green by the Malaysian Timber Certification Scheme. 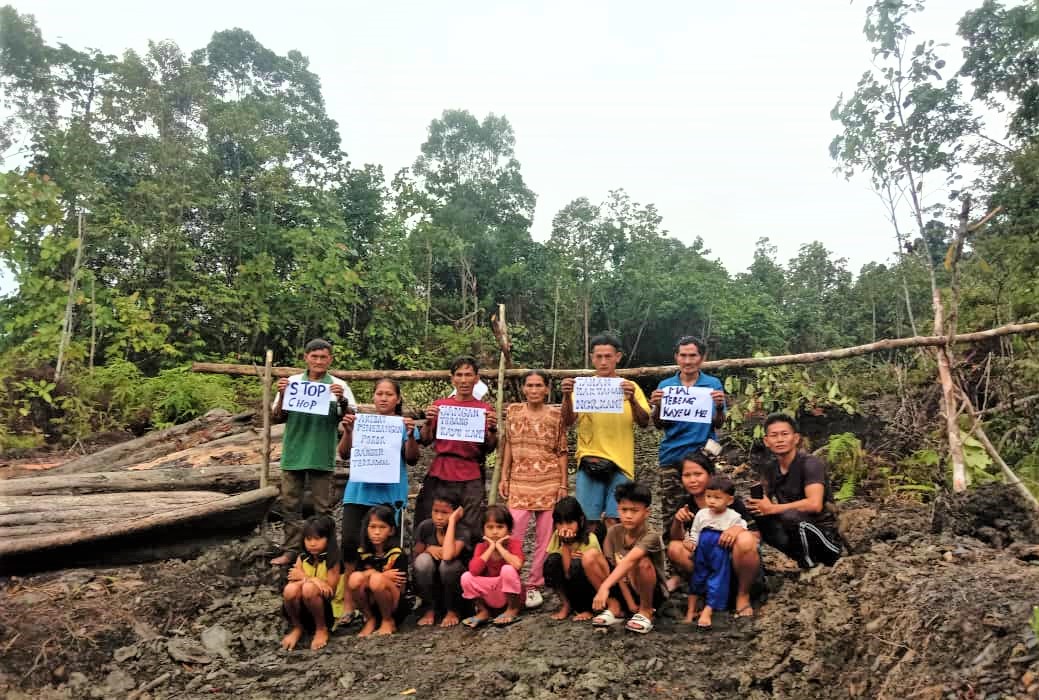 Villagers put up a blockade against Samling’s timber extraction near Long Pakan. 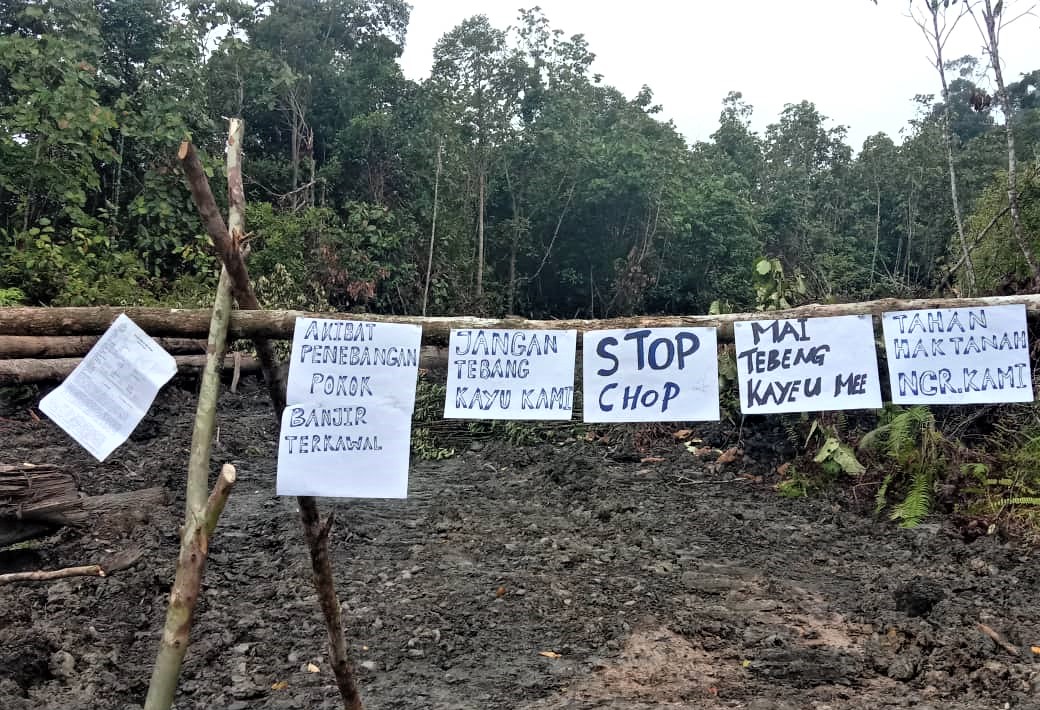 Long Pakan villagers are among the many Penan communities that have held on to much of their forests through decades of resistance, while watching others downriver trade away their land for short-term gain, or have it swept out from under them for government-approved logging or palm oil projects.

Samling is now suing SAVE Rivers for 5 million ringgit (1.1 million USD) for reporting on the Long Moh encroachment and other violations of Indigenous rights in what is a clear case of Strategic Litigation Against Public Participation (SLAPP) — litigation designed to silence and intimidate. The suit claims SAVE Rivers made defamatory statements, including accusing Samling of failing to engage in meaningful dialogue with the community.

Local communities also filed official complaints with the Malaysian Timber Certification Council (MTCC) and PEFC, but the certification bodies simply deferred to Samling. The MTCC, the custodian of MTCS, insists it does not have the power to withdraw certifications. That power falls only to the auditing body, SIRIM, a corporate body owned by the Malaysian government. And in Sarawak, it is suspected that the audit process is paid for by — you guessed it — Samling, a clear conflict of interest. In a mess of confusing procedures, policy loopholes, and persistent responsibility-shirking, the complaint process seems to go nowhere.

Learn more about this Earth Island project at borneoproject.org

Which is why communities are often better off directly calling out companies in the public arena. But the chilling effect of SLAPP suits on these campaigns is very real, and very concerning. If civil society organizations like SAVE Rivers can’t safely report incidents like those in Long Moh through their websites and social media, then communities are left to choose between toothless complaint procedures or defamation lawsuits. Luckily for communities in the Baram region, the lawsuit seems to have backfired, attracting an influx of attention and support from around the world.

In May, several environmental and human rights groups, including The Borneo Project, sent a letter to the MTCC demanding that the council acknowledge that it isn’t enforcing its own certification standards and take action to correct the situation. The letter also calls attention to the worrying precedent set by Samling’s lawsuit against SAVE Rivers. We hope the letter will call further attention to this injustice and lead to meaningful change on the ground.

This is far from the first time The Borneo Project has seen companies like Samling tread on the rights of Indigenous communities in Malaysian Borneo. And it may not be the last. But communities in the Baram region of Sarawak have demonstrated they won’t back down, and that grassroots campaigning can still do real reputational damage to companies like Samling. We won’t back down either. As long as villages like Long Pakan and Long Moh continue fighting for their land and their rights, we will continue amplifying their message and supporting their work.