You Shall Not Pass

When Marilyn Baptiste, chief of the Xeni Gwet’in community of the Tsilhqot’in First Nation in British Columbia, was told by two members of her tribe that a long line of trucks and heavy equipment was headed into the nation’s territory, she knew she would have to act quickly to stop them. It was November 2011, and three years earlier a Canadian mining corporation, Taseko Mines Limited, had announced its plans to dig a massive, open-pit copper and gold mine on the tribe’s territory in an area called Fish Lake. The company had failed to receive all of the necessary permits from the Canadian federal government to construct the mine, but it was determined to begin some exploratory excavation anyway. By sheer luck, a couple of Tsilhqot’in members were out moose hunting when they spotted the convoy of industrial equipment entering tribal lands, and they rushed to tell Baptiste about it. 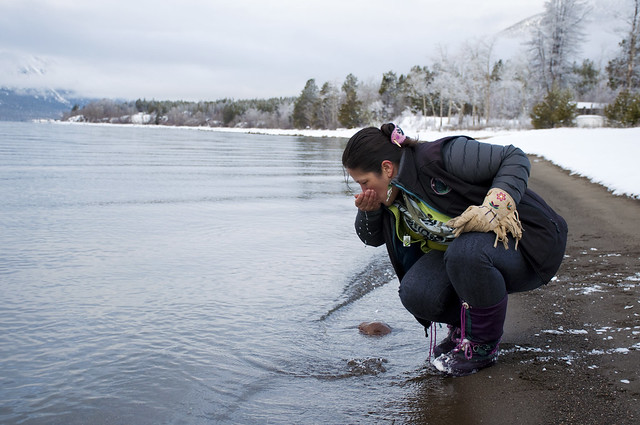 “Well, they call it a ‘moral blockade’ — it was myself and my hubby and my late niece,” Baptiste, 44, told me in a recent interview. “And basically the intent was to stop them and to ask them to exit our territory. And that’s what they did.”

The Taseko Mines exploratory convoy included 12 vehicles, including four semi flatbeds with bulldozers and drilling rigs. The way Baptiste tells the story, she and her husband parked their truck diagonally across the road to stop the convoy. The two parties “yakked back and forth … and basically the supervisor said they had a permit and they were going into the area to do exploration.” But the Tsilhqot’in live in what they call “unceded territory” — meaning that they never signed a treaty with white Canadian settlers relinquishing their lands. As mining company security personnel began videotaping the confrontation, Baptiste “advised them they didn’t have jurisdiction.” She told them, “They had not consulted with us. And to please leave our territory.”

Eventually officers with the Royal Canadian Mountain Police showed up. After a three-hour standoff that, as Baptiste says, “felt like it was forever,” the miners said they would turn the convey around and leave Tsilhqot’in land. “By the time they were all turned around, the RCMP came to shake our hands and escort them out of the territory for me.”

Thousands of miles to the south, in Honduras, another Indigenous leader, a Lenca woman named Berta Cáceres, has also used the old-fashioned tactic of physical blockade to halt mining practices.

After the 2009 coup that overthrew President Manuel Zelaya, huge portions of Honduras (some estimates go as high as 30 percent) were signed over to mining concessions within a matter of weeks. The then 36-years-old Cáceres quickly mobilized the organization she had founded at the age of 22 — the National Council of Popular and Indigenous Organizations of Honduras (COPINH) — to fight the hundreds of mining concessions and other mega-development projects that were being doled out to international investors. In the community of San Francisco Campo, for example, Indigenous Tolupan members led a 13-day blockade during which several protesters were assassinated. Cáceres spearheaded a blockade in an area called Rio Blanco to prevent the construction of a massive hydroelectric dam on the Gualcarque River. Despite multiple eviction attempts and violent attacks, including the assassination of one her close colleagues, Cáceres and allies maintained the blockade for a year. In 2013 the company behind the dam, a Chinese multinational called Sidrohydro, withdrew its plans. Cáceres told me: “The coup changed our lives. It really consolidated an agenda of domination and pillage, and it’s brought on greater repression and greater vulnerability … and an expansion of the impunity of transnational corporations.”

There’s few more powerful acts of political courage than the simple act of sitting down and saying “No” to the injustice of environmental destruction. On Monday, Marilyn Baptiste and Berta Cáceres will be recognized for such courage when they are among the six recipients of the 2015 Goldman Environmental Prize. 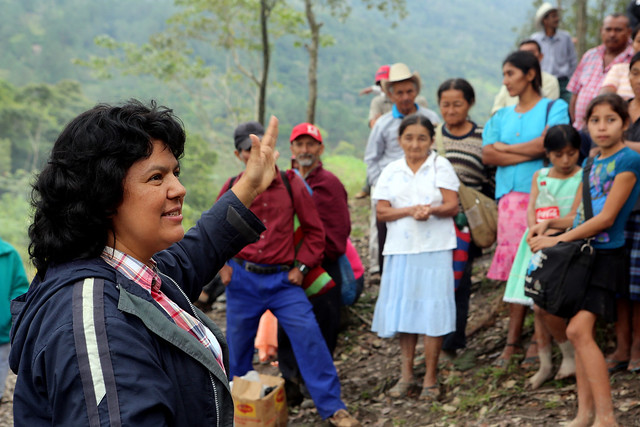 Since it was established 25 years ago, the Goldman Prize has been awarded to some of the most inspirational environmental leaders on the globe — including the late Nobel Peace Prize winner Wangari Maathai, the late mountaintop removal mining foe Judy Bonds, and Chinese activist Ma Jun. Given the prize’s international scope, recipients naturally come from a broad diversity of ethnic backgrounds. But 2015 is among the few times that a full third of recipients — Cáceres and Baptiste — come from Indigenous communities.

Indigenous peoples have a long history of protesting mega-developments and extractive industries that pose a threat to their traditional lifeways. In recent years, native opposition to industrial projects and extreme energy has become increasingly intense and widespread, especially here in North America. In the Pacific Northwest, the Lummi Nation is fighting a proposed coal-export terminal outside of Bellingham, WA, and the tribe’s efforts to invoke their treaty rights could very well sink the coal port. In the Southwest, the Apache have been among the most vocal opponents of a proposed Rio Tinto copper mine in Arizona. In British Columbia, Canadian First Nations, including the Tsilhqot’in, have been the backbone of opposition to the proposed Northern Gateway tar sands pipeline. And on the Great Plains, the Lakota have joined forces with ranchers and farmers in a “Cowboy-Indian Alliance” against the Keystone XL pipeline. Last November, the president of the Rosebud Sioux said the House of Representatives vote in favor of the pipeline was an “act of war.” (But beware stereotypes. There’s no unanimous Indigenous point of view on the environment. For example, the Navajo leadership is supporting an ill-conceived mega development at the Grand Canyon, and Montana’s Crow are in favor of more coal mining.)

Both Baptiste and Cáceres say their activism is fueled, in large part, by their Indigenous worldview.

Cáceres told me: “We are a rebel people, sustained in a worldview that we have to be guardians of the earth, of the water, of life in general. And we’re facing a planetary moment that’s very grave. So the spiritual force — it’s culture, it’s worldview, it’s what nourishes the process of resistance that we have undertaken.”

“As Indigenous people, we don’t see ourselves as activists,” Baptiste said, chuckling. “We are born into this. This is our life and our whole being and our duty and our responsibility to protect our lands and our waters and our future generations. So basically it is who we are. We are connected to Mother Earth. So it’s funny to be identified as an activist, though some of our people say, you’re a tree hugger. Yeah, I’ll hug a tree any day.”

And both women say they are committed to keep putting their bodies on the line to protect the sovereignty and ecological integrity of their traditional lands. “Our ancestors said it years ago — humanity and the planet are living in a moment of crisis,” Cáceres, who has been physically attacked five times in the course of her political advocacy, told me. “If we don’t sow the seeds of life and equilibrium and harmony with all beings and with nature, we are condemned to extinction.”