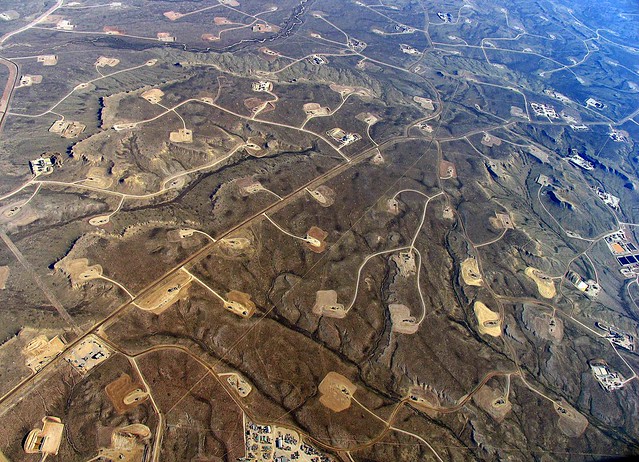 Photo courtesy of EcoflightAn oil and gas drilling area in Wyoming. In terms of public health, children and pregnant women are among the groups most at risk from air pollution caused by fracking.

“Emerging data from a rapidly expanding body of evidence continue to reveal a plethora of recurring problems and harms that cannot be sufficiently averted through regulatory frameworks.

“There is no evidence that fracking can operate without threatening public health directly or without imperiling climate stability upon which public health depends.” So concludes a must-read 266-page report published on Tuesday by the Concerned Health Professionals of New York and the Nobel Peace Prize-winning group, Physicians for Social Responsibility.

The report examines over 1,200 peer-reviewed research articles as well as government reports and news articles. The hard-hitting report argues that: “the evidence to date indicates that fracking operations pose severe threats to health, both from water contamination and from air pollution.”

Take water pollution and the vast amounts of toxic waste-water dumped daily underground. “In the United States, more than two billion gallons of water and fracking fluids are injected daily under high pressure into the earth for the purpose of enabling oil and gas extraction via fracking or, after the fracking is finished, to flush the extracted wastewater down any of the 187,570 disposal wells across the country that accept oil and gas waste.”

All of the two billion daily gallons of fluid is “toxic, and it passes through our nation’s groundwater aquifers on its way to the deep geological strata below where it demonstrably raises the risk for earthquakes.”

Air quality does not fair better, either. “In the air around drilling and fracking operations and their attendant infrastructure, researchers have measured strikingly high levels of toxic pollutants, including the potent carcinogen benzene and the chemical precursors of ground-level ozone (smog).”

The report adds: “In some cases, concentrations of fracking-related air pollutants in communities where people live and work exceed federal safety standards. Research shows that air emissions from fracking can drift and pollute the air hundreds of miles downwind.”

I have repeatedly blogged that the science was taking time to catch up with fracking. But there is increasing evidence of harm which cannot now be ignored. The science has caught up.

Dr. Sandra Steingraber, one of the report’s eight co-authors, tells Rolling Stone magazine, which has covered the release of the report:”With fracking, we had six peer reviewed articles in 2009 pointing to possible public health risks. By 2011 we had 42. Now there are more than 1200.”

Steingraber adds: “Fracking is the worst thing I’ve ever seen. Those of us in the public health sector started to realize years ago that there were potential risks, then the industry rolled out faster than we could do our science.”

“Now we see those risks have turned into human harms and people are getting sick,” Steingraber continues. “And we in this field have a moral imperative to raise the alarm.”

One of the main areas of concern is for vulnerable groups of people at risk from air pollution such as children and pregnant women.

“Pregnant women have a major risk, not only themselves but they’re carrying a fetus whose cells are multiplying continuously,” Dr. Lynn Ringenberg, a retired Army colonel and the president-elect of Physicians for Social Responsibility told Rolling Stone. “If those cells get hit by some toxic chemical from fracking, it may not manifest itself for years.”

Dr. Kathleen Nolan, a pediatrician and bioethicist who has worked with one Pennsylvania family near the shale gas fields. “They would see a yellow fog, kind of like a chemical mist coming from the compressor station,” Nolan told the magazine. “Their two youngest children, nine and 11, started having tics where their muscles would go into spasms, those spasms would persist even when they were asleep.”

There is also increasing evidence of harm to shale gas workers “These are killing jobs,” says report co-author Dr. Sandra Steingraber. “We have actually detected benzene in the urine of workers at levels known to raise the risks of leukemia.”

The report concludes with Maryland physician Judy Stone, who says: “Fracking profits go to private industry but the public—families and communities—bear the costs of the many health complications from the drilling.”

She adds: “There is growing evidence of a variety of health problems being associated with fracking. Common sense dictates that drinking and breathing cancer-causing agents will take their toll. The correlation is too strong to ignore, especially when we have other, cleaner energy options.”