A Call for the World’s First Rewilding Nation

Ahead of UN climate talks in Glasgow, advocates are pushing for a country-wide commitment to rewild Scotland.
Jonathan Shipley

Long ago, the European brown bear roamed Scotland. So did herds of elk. Wolves traversed the islands, walruses populated the rugged coasts, and sea eagles soared over the moorlands. Birch, hazel, pine, and oak trees regally crowned throughout Scotland’s landscape. Woodlands, in fact, covered much of the country. 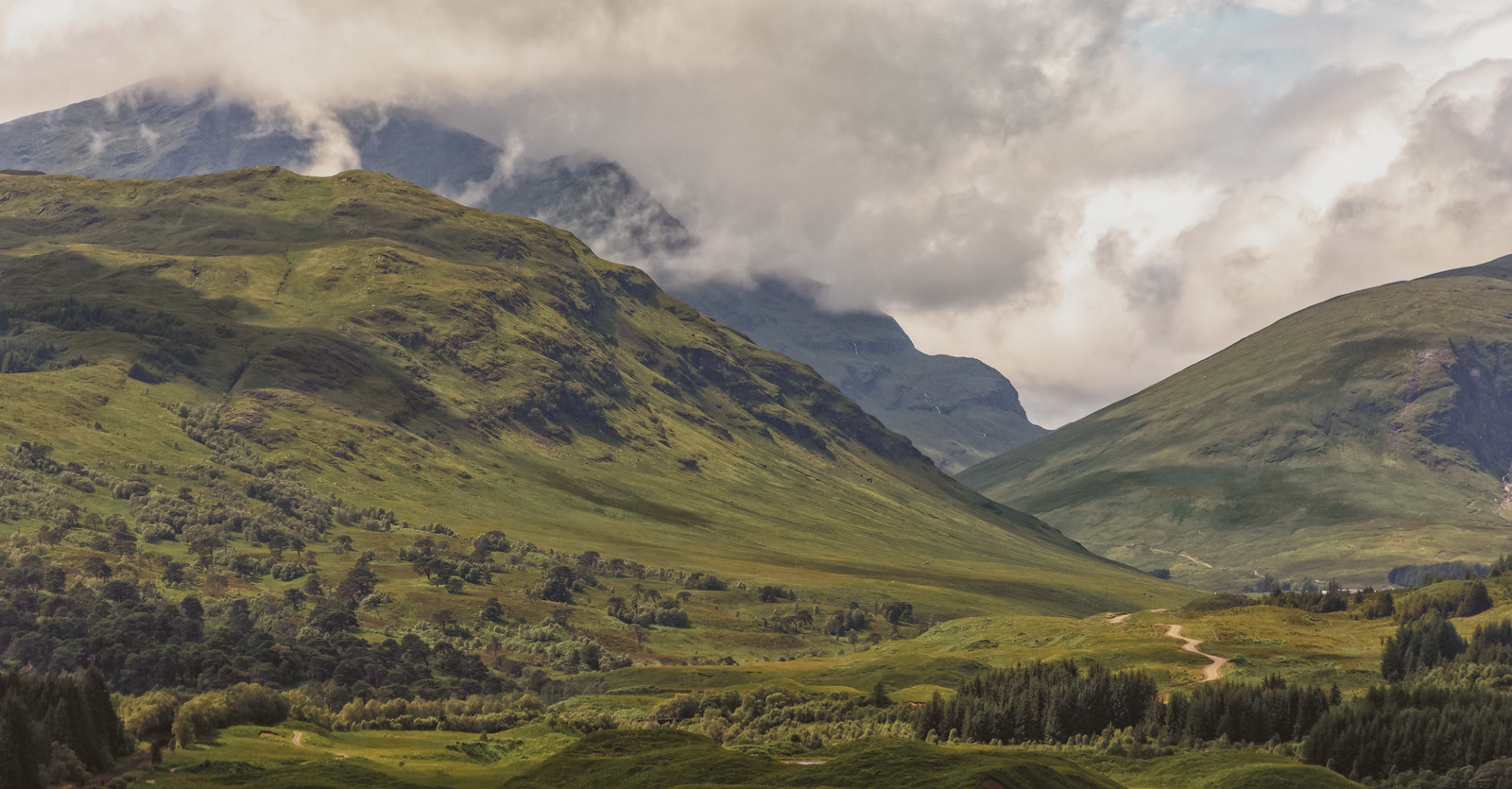 Though much of Scotland was once forested, native woodland covers just 4 percent of the total land area today. Photo by Gary Campbell-Hall.

Scotland lost its bears to hunters and habitat loss by the tenth century. It lost its elk a few centuries later. The country’s last known wolf was shot and killed in 1743. The last sea eagle eggs were taken by an English vicar in 1916 and the last adult sea eagle was shot and killed in 1918. Walruses rarely make appearances along the coast. By 1900, woodland covered only about 5 percent of Scotland’s land area. Scotland today is nothing like Scotland was several centuries ago.

Activists, though, have planted seeds — literally and figuratively — to change that. To return the country, as much as it can be, to the vibrant natural home that it once was: one full of foxes and fescues; beaver and bees; capercaillies and cloudberries. To return it to a place that supports the species still present in the landscape, and then slowly reintroduce lost species over time.

Enter the Scottish Rewilding Alliance (SRA). The SRA, formed in 2019, is a collaboration of over 20 like-minded organizations that share a mission to enable rewilding at a scale new to Scotland. To not only conserve what little natural habitat remains in Scotland, but to expand it. Member organizations, such as Trees for Life, Woodland Trust Scotland, Rewilding Britain, Cairngorms Connect, South Uplands Partnership, Open Seas, and others, are asking the government to make Scotland the world’s first “rewilding nation” before Scotland hosts the COP26 climate summit in Glasgow in November by committing to a nationwide rewilding effort.

“We have had decades of conservation work in Britain,” says Richard Bunting, spokesperson for the SRA. “And thank goodness, because the important work by so many individuals and organizations has made a massive difference to the natural world.”

Bunting concedes, however, that conservation is not enough in the face of biodiversity and climate crises. Even with the conservation work that’s been undertaken so far, half of Britain’s remaining native plant and animal species are in decline. Since 1994, there has been a 24 percent decline in average species’ abundance in Scotland. Red squirrel populations are declining, as are European wildcat and great yellow bumblebee populations. Others, like the aforementioned brown bears and elk, as well as lynx, have gone extinct.

Further, only 1.5 percent of Scotland’s land is incorporated in national nature preserves and just 4 percent is native woodlands. Some 25 percent of those native woodlands are severely depleted and do not support the plants and animals that they should.

Bunting says bluntly, “It’s clear we need to do more. The ‘more’ is rewilding.”

A broad stroke definition of rewilding, Bunting says, is “the large-scale restoration of ecosystems to the point where nature can take care of itself.” He continues, “It seeks to reinstate the natural processes and, where and when appropriate, reintroduce missing species — flora and fauna — allowing them to shape the landscape and its habitats.” 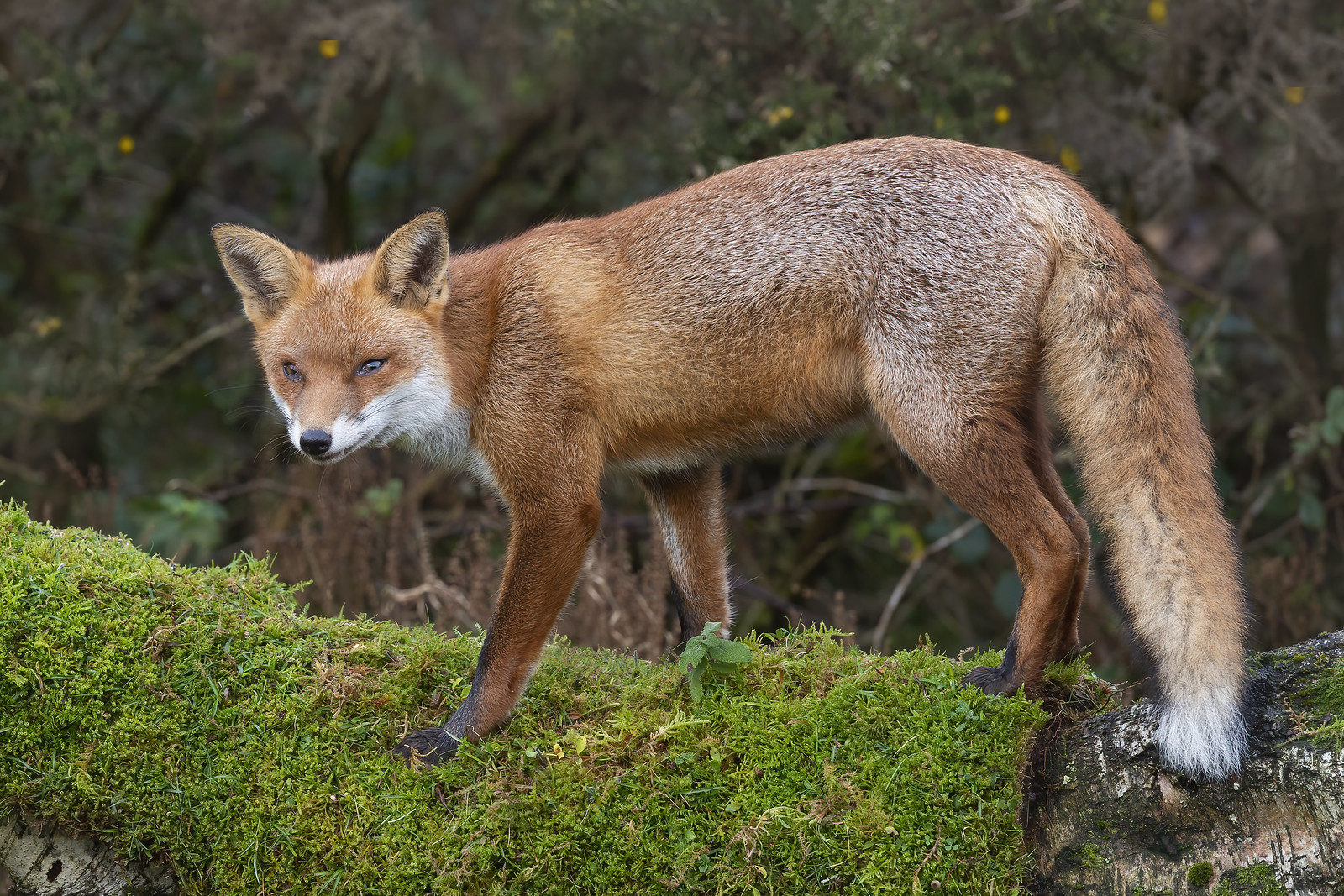 The highly adaptable fox is still found in nearly every Scottish habitat. Rewilding proponents envision a future where other native mammals are common across the landscape as well. Photo by Caroline Legg.

A recent poll done by the SRA suggests 76 percent of Scots would back the idea of rewilding Scotland. Only 7 percent oppose the idea. Bunting says that making Scotland the world’s first rewilding nation before the UN climate conference would be “a powerful statement of intent that the country is serious about tackling the climate and nature crises, reconnecting people to nature, and regenerating its communities.”

The benefits, the SRA says, are manyfold. Rewilding helps restore biodiversity, mitigates climate change through increased forest cover and revitalized peatlands, and brings wellbeing benefits to humans. All of this is required, they argue, for the sustainability and health of the country and the world at large. Scotland’s rural communities would benefit from richer opportunities for outdoor recreation, which improves one’s health. According to a 2000 study done by the American Recreation Commission, 90 percent of respondents who said they participated in regular outdoor recreation reported satisfaction with their overall lives, as opposed to 60 percent who didn’t.

With or without the “rewilding nation” label, progress is being made. Rewilding projects in Scotland are increasing in number, and the organizations putting forth those projects are increasingly working together, giving much needed connectivity of habitats. Large scale rewilding projects that have already begun include Carrifran Wildwood, Mar Lodge estate, and Cairngorms Connect.

“I would love to see glorious Caledonian pine and native woodland marching up mountains, reclaiming their natural limit,” dreams Sydney Henderson, Cairngorms Connect’s involvement manager. The organization, part of the SRA, is doing what it can to make that dream a reality. In partnership with neighboring land managers in and around Cairngorms National Park, the organization has removed nearly 3,000 acres of non-native conifers and planted nearly 1,650 acres of Scots pine since 2019. By 2065, Cairngorms Connects hopes their work will be clearly evident in the landscape. “I would like to see humans,” Henderson says, “living as part of the larger ecosystem, connecting with nature, and experiencing a landscape we didn’t even know we were missing.”

SRA would like to build on these successes, and is advocating for policies to rewild 30 percent of the country’s land. So far, more than a dozen members of the Scottish parliament have backed the idea.

According to government numbers, an estimated 57 percent of Scotland’s rural land is in private hands, 12.5 percent is owned by public bodies, 3 percent of land is under community ownership, and 2.5 percent is owned by non-profits. Which is why SRA is also reaching out to private landowners and Scottish citizenry to join the effort and make the places they call home as wild as they can be. Suggestions include planting native trees, shrubs, and flowers; hanging bird, bat, and butterfly houses; creating brush piles for additional habitat; offer water sources; and reducing pesticide use. “We can rewild 30 percent of Scotland’s land by 2030,” Bunting says, “A goal that needs no loss of productive agricultural land.”

Reintroducing beavers, Eurasian lynx, and Scotland’s apex predators of old that were driven to the point of extinction would restore balance to the ecosystems again. Perhaps an elk would graze again outside Glasgow. Perhaps a Scottish wildcat would hunt prey outside Edinburgh. The Scottish Rewilding Alliance has big goals and lofty dreams for Scotland’s near and distant future. As Bunting says, “Rewilding is about hope.”

Jonathan Shipley is a freelance writer based in Atlanta, Georgia. His writing has appeared in such publications as The Los Angeles Times, National Parks Magazine, and Fine Books Magazine, among others.