World Biodiversity Hotspot Worth Much More than a Nickel

If there were a place in the United States that possessed such biodiversity that it had been designated an “Area of Global Botanical Significance” by the International Union for the Conservation of Nature and also proposed as a UNESCO World Heritage Site and Biosphere Reserve, surely it would be protected from any industrial development that would compromise its ecological integrity. There is, in fact, such a place. But its most recent designation is “endangered” as the area faces threats from three proposed nickel strip mines at its heart.

photo by Miguel Vieira, on FlickrBear Mountain and tarn below Devil’s Punchbowl in Siskiyou Wilderness

Spanning the northern California-southwestern Oregon border and encompassing nearly 20,000 square miles, the Klamath-Siskiyou ecoregion includes a complex suite of geology, climate, terrain, and such a remarkable example of temperate climate biodiversity that in 1992 the IUCN recognized the region as an area of global botanical significance. The region is home to 3,500 plant species – 280 of which are rare or endemic. The streams that originate in the Klamath and Siskiyou mountains are among the most productive on the continent, the spawning grounds for wild Pacific salmon and steelhead. And while the region has the most designated Wild and Scenic Rivers in the US, nearly a dozen wilderness areas, and the 62,000-acre Cascade-Siskiyou National Monument, it also contains the largest area of unprotected forest on the West Coast outside of Alaska. Despite protection in some areas, the region also has been heavily impacted by logging, livestock grazing, road building, and in particular, gold mining.

Now, a raft of proposed surface nickel mines pose a new threat to the region’s environmental health. The threat is serious enough that two of the region’s rivers – the Rogue and Smith – were placed on American Rivers’ list of 10 Most Endangered Rivers of 2015.

There are three proposals for nickel laterite mines on the Oregon side of the Klamath-Siskiyou ecoregion. Two involve plans for exploratory drilling by the Red Flat Nickel Corporation, a subsidiary of the British investment company St Peter Port Capital Ltd., to determine the nickel content of the rocks and whether it is worth moving ahead with mining operations. One of the two mining claims, which were first staked in 2007, is located in the headwaters of the North Fork Smith River, a primary tributary of northern California’s famed Smith River. The second claim is located in the headwaters of Hunter Creek, near Gold Beach. The first claim, the 3,000-acre Cleopatra claim, is also within the South Kalmiopsis Roadless Area, a place that conservationists want to see eventually added to the Kalmiopsis Wilderness. The third is a claim on Rough and Ready Creek by a different company, RNR Resources, which is trying to move forward with a full-blown mining operation.

“There is a lot of opposition to putting a nickel strip mine in the headwaters of the Smith River because of its ecological impacts,” says Joseph Vaile, executive director of KS Wild, one of the many local and regional conservation groups opposing the mines. “The Smith River is also the drinking water supply for communities in northern California, so there is a lot of concern in California, even though the mines are in Oregon”

Nickel laterite is found in soils and rocks near the earth’s surface, so mining them is done through surface or strip mining. The Red Flat Nickel Corporation would probably use an acid heap leaching process to recover the ore. This involves digging up nickel-bearing soil and rock, crushing it, piling the material on top of a non-permeable surface, then leaching out the ore using sulfuric acid. The resulting nickel precipitates are then put through the smelting process to produce metallic nickel. 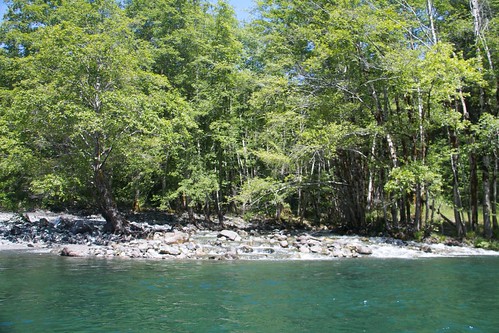 photo by Zachary Collier, on FlickrMislatnah Creek, near the Chetco River in the Kalmiopsis Wilderness

While Red Flat Nickel Corporation is still in the exploratory phase, RNR Resources has been pressing the US Forest Service to approve its nickel mine on Rough and Ready Creek since the early 1990s. But so far the company has failed to provide the federal government with all the information needed to complete the required National Environmental Policy Act assessment before mining can begin. The company’s plan includes an on-site smelter where it would also store toxic slag from the smelting process. In 1992, RNR Resources applied to patent its mining claim, which would have allowed it to purchase more than 4,000 acres of the publicly owned watershed for $2.50 per acre and move forward with the mining operation. But in 1995, Congress put a moratorium on patents for new mining claims that were not already well underway, and RNR’s patent was denied. RNR Resources is suing the federal government for $600 million, charging that its refusal to approve the mine and denial of its patent is a private property “takings.”

Environmental advocates have highlighted a long list of concerns with the proposal, including air, surface and groundwater pollution, and impacts from road access construction and other activities associated with an industrial mining site. The RNR Resources’ mining plan that was rejected by the Forest Service, for example, called for a road along Rough and Ready Creek, with many stream crossings and punching through a botanical area that holds the highest concentration of endemic and rare plants in the state. These impacts would spread far beyond the mine locations.

In a region where streams run extraordinarily clear, clean and cold, the biggest concern is water quality “By and large the mine sites are upstream of fish use, but there is potential for impacts downstream on fish including sedimentation and other contaminants,” says Todd Confer, district fish biologist for the Oregon Department of Fish and Wildlife in Gold Beach. Hunter Creek is within the Pistol River watershed, while Rough and Ready Creek is in the Illinois River basin. Those systems, along with the Smith River system, have wild runs of fall Chinook salmon, winter steelhead, and Southern Oregon/Northern California Coast coho salmon that are listed as “threatened” under the Endangered Species Act. Since none of those river basins have ever been artificially stocked, the wild fish populations there are genetically untainted by contact with hatchery fish.

“You have watersheds that are pristine and provide some of the cleanest water in the West,” says Barbara Ullian, coordinator for Friends of the Kalmiopsis, a local grassroots group that has been on the forefront of the battle against mining in the Klamath-Siskiyou ecoregion for years. “So having a huge industrial mine above groundwater that provides water for most residents of Del Norte County is a huge mistake.”

The culprit behind all this is the General Mining Act of 1872 that makes hardrock mining a preeminent use of federal lands; provides for no environmental safeguards; allows private mining companies to buy public land for a pittance; and permits billions of dollars of hardrock minerals to be extracted from public lands without mining companies having to pay any royalties to the public, or to be responsible for toxic hazards left behind. The massive August 2015 spill of toxic, heavy metal-laden wastewater from the abandoned Gold King Mine into Colorado’s Animas River is a stark example of the costs passed on to the public by mines operating under the old laws. But the law has politically powerful supporters, and efforts at reform have not gone well. One recent attempt by Congress at reforming the act – which included requiring royalty payments to the federal government and increased environmental protections for public lands and natural resources –was introduced by 20 Democrats in June 2014, but went nowhere.

When the Smith River National Recreation Area was established in northern California in 1990 all mining and granting of patents was banned within its 450 square miles. But across the border in Oregon – where the 1872 mining act still applies – it is extremely difficult to stop mining if the mining companies jump through all the required hoops. “The only way we can give the area any protection is to have it withdrawn from the mining act,” KS Wild’s Vaile says. Oregon Senators Ron Wyden and Jeff Merkley, both Democrats, and Representatives Peter DeFazio (D-OR) and Jared Huffman (D-CA), have introduced legislation that would permanently prevent any new mining claims in the more than 100,000 acres affected by the proposed nickel mines. In the meantime, the Bureau of Land Management is proposing to temporarily withdraw the area from new mining activity for up to seven years while the legislation makes its way through Congress. BLM is accepting comments on the withdrawal proposal until September 28, 2015.

“There are a lot of people here who are really, really worried about the mines,” Ullian says. “This is where we live, where we get our drinking water and where we love.”

Make your voice heard on this issue by sending written comments on the proposed mining withdrawal to the Bureau of Land Management, P.O. Box 2965, Portland, Oregon 97208-2965. More information about the proposed withdrawal and related documents can be found on the Rogue River-Siskiyou National Forest projects web page at this link.