An interesting thing happened to me while driving along the Central California coast a few months ago. I decided to get off the beaten path and took Highway 135 north through Los Alamos, following it past its scenic, rural countryside until I reached old Highway 1, the coastal route to the small beachside town of Guadalupe in northern Santa Barbara County that’s home to the second largest intact dune ecosystem in California.

The 18-mile long costal dunes complex begins in Pismo Beach, about 5 miles northwest of the town, and gradually grows more spectacular as it stretches south to Guadalupe. Once across the Santa Maria Rivermouth, waves of sand rise dramatically for 2.5 miles from the car park south to craggy Mussel Rock. Some of the dunes tower 500-feet-tall, as they immediately ascend from the shoreline. Hidden within the dunes are several freshwater lakes offering safe wetland havens to numerous bird species.

This dramatic landscape hasn’t been missed by Hollywood. The first 10 Commandments movie, a silent but early Technicolor epic by Cecil B. De Mille, was filmed here in 1923. De Mille built what was then the largest set in movie history, called “The City of the Pharaoh,” for the film and later had it dismantled and secretly buried in the dunes. The remains of the set, called the “Lost City of Cecil B DeMille,” still lie under in the sand, though the burial site was eventually located in 1983 by a group of film aficionados.

Photo by Chuck GrahamThe National Wildlife Refuge was established in 2000.

Scenes from Hidalgo and Pirates of the Caribbean: At World’s End, were also filmed here.

In 2000, 2,553 acres in the heart of the dunes complex — which contains some of the most remote and least disturbed habitats in the complex — was declared a US National Wildlife Refuge.

Every time I hike the dunes I see something I didn’t spot the time before. That could be because of the ever-shifting sands that are constantly groomed by steady northwesterly winds. These winds sometimes sculpt the sand into peaks hundreds of feet tall. But more likely, it’s because the critters that have adapted to life in the dune ecosystem are sort of secretive. 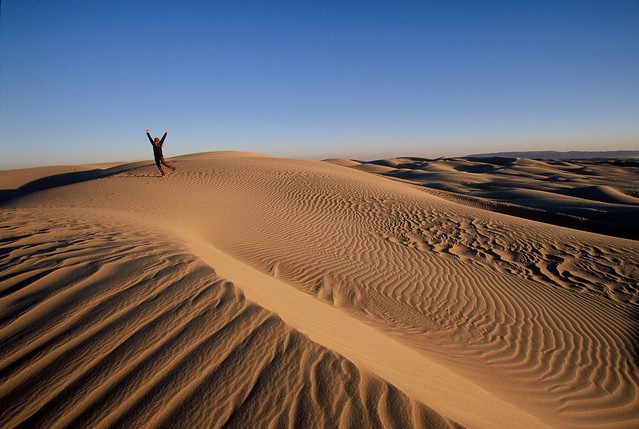 Once, a bobcat leaped in front of me, springing from a coreopsis bush. Another time a California horned lizard scampered across the dunes kicking up tiny granules of sand in its wake. During a windy late afternoon I saw a peregrine falcon playing with a long strand of elk horn bull kelp down by the water’s edge.

The dunes offer a varied and vital habitat more than 120 species of rare plants and animals including the California red-legged frog, the western snowy plover, and the California least tern. Silver lupine, giant coreopsis, sand verbena, Indian paintbrush and other vibrant dune flora have adapted to the oceanfront harsh conditions. These plants add more color to the dunes and help stabilize the windblown landscape by holding down the sand with their roots. 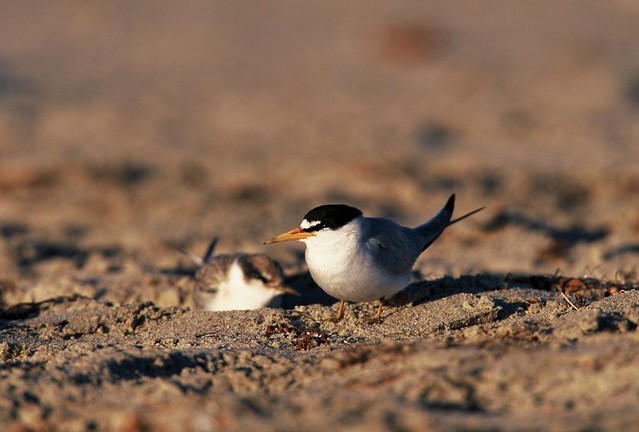 Photo by Chuck GrahamThe California least tern is one of more than 120 rare sepecies that find refuge in the dunes.

Even when I don’t see any wildlife, the diversity of animal tracks crisscrossing the dunes informs me about the varied life prevalent in this breathtaking, one-of-a-kind landscape.

The sand dunes are a natural work of art. Their long shadows creep in at sunset and retreat at dawn. Ruler-edged wind lines stagger across massive sand hills and the finely manicured dune crests have a chiseled appearance. My favorites are the majestic fish hook-shaped dunes that shift with every northwesterly wind. As they soak in pink and orange hues of the rising or setting sun, they stand out in the perfect contrast against the rest of the sweeping dunescape. I like to think of this place as one of the best-kept secrets on California’s central coast.

The gate to the wildlife refuge opens at dawn and closes just after sunset. The best time to visit the dunes is late September through the winter when the winds are calmer.