Amplifying Women’s Voices in the Fight for Climate Justice

On Louisiana’s Gulf Coast, journalist, activist, and mother of six Cherri Foytlin is a tireless fighter for climate justice, taking on huge entities threatening the health and ecosystems of Gulf Coast communities. She leads the L’eau Est La Vie (Water is Life) Camp, a floating community hidden away within Louisiana’s wetlands that is challenging the Bayou Bridge pipeline, a project of Energy Transfer Partners, the company behind the Dakota Access Pipeline. A flotilla of handmade rafts, some laden with arresting Indigenous art structures, is home base for the next phase of the resistance inspired by Standing Rock. 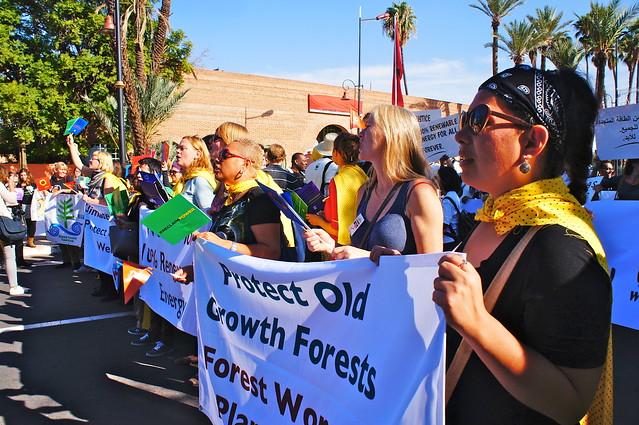 Photo by Emily Arasim/Women’s Earth & Climate Action Network Women march for climate justice in Morocco during the UNFCCC COP21. A new initiative provides acess to a rich database of stories, videos, and reports about women leading the fiight for climate justice.

A world away, Marshallese Kathy Jetnil-Kijiner, has found that the spoken word is her most potent weapon in confronting existential climate change. The 29-year-old poet, writer, performance artist, and journalist wowed an audience of 120 heads of state at the opening of the UN General Assembly in 2014 with her impassioned delivery of “Dear Matafele Peinem,” a poem that pledged to her baby daughter that the Marshall Islands would not only survive the threats of climate change but go on to thrive.

Zimbabwean peasant farmer Elizabeth Mpofu is well tested by her nearly forty years working for the betterment of smallholder farmers and on behalf of women’s rights. Smallholder farming, she says, is the key to restoring the balance of the Earth and creating long-lasting resilience in the face of climate change impacts. Mpofu serves as general coordinator of the International Coordination Committee for La Via Campesina, an international peasants’ movement that includes more than 200 million global members. Zimbabwe’s fast-track land reform of the early 2000s made Mpofu a land owner and a believer in the political efficacy of direct action. She also believes in the power of women. “In most regions where Via Campesina is present,” she says, “the leaders are women. Women are actively involved in formulating our own policies. We are building the capacity of women within the organization from the ground up.”

Despite countless global studies that attest to women’s unique vulnerabilities and life-saving ingenuity in the face of climate change impacts, CNN and Media Matters have reported that only 15 percent of those interviewed in the media coverage of climate change have been women. To address this dramatic inequity and provide access to a rich database of stories, articles, videos, podcasts, reports, and other resources representing the women around the world who are leading the struggles and solutions for climate justice, today WECAN (Women’s Earth and Climate Action Network) launched a comprehensive web-based initiative: Women Speak: Stories, Case Studies and Solutions From The Frontlines of Climate Change.

Foytlin, Jetnil-Kijiner, and Mpofu are among the hundreds of voices of frontline women confronting the planet-threatening effects of climate change that are included in this unprecedented archive, which was compiled by a research team of 22 contributors, mostly volunteers, from countries including Brazil, South Africa, India, Fiji, Canada, Greece, Honduras, Kenya, South Korea, Sweden, and the United States. The Women Speak initiative will serve as an ever-growing source of information, research, and multimedia storytelling for frontline Earth defenders, policymakers, journalists, activists, educators, students, and anyone seeking to understand why women are essential to achieving just action on climate change.

“Our research points out a huge gap in the available material of the quantitative and qualitative evidence of women’s leadership and success stories. Policymakers need this material to better inform and leverage policy decisions,” says Osprey Orielle Lake, WECAN founder and executive director. “Frontline women need intelligence about each other’s efforts that can help them in a strategic analysis of their work and provide them with practical information in areas such as climate-resistant farming and clean energy. Journalists and researchers need easy access to a comprehensive source of material that fully illustrates the breath and diversity of the women who are rising up to protect their communities and defend Mother Earth.”

Moreover, Osprey says, “[T]his knowledge sharing is essential to a unified women’s resistance to dangerous worldviews of domination and exploitation, which sit at the root of both degradation of Earth’s natural systems, and violence against women of the world.”

Poet Kathy Jetnil-KIijiner agrees: “To tackle climate change we need a radical change of course … in a world of Trumps, over-development, nuclear wars, loss and devastation — our ability to connect is what strengthens us.”

Through this collection and offering of materials, WECAN hopes to highlight on-the ground solutions, strategies, and worldviews that uplift women’s leadership with results that can be shared, replicated, upscaled, and used for inspiration worldwide. While extensive hours of research have gone into the compilation of this resource, WECAN acknowledges that the information included in the Women Speak database represents just a small fraction of the vital work being done by women globally, much of which remains undocumented and unpublished. Women Speak is intended to be an open, ‘living’ project that will be continually updated and improved.

The potential of Women Speak: Stories, Case Studies and Solutions From The Frontlines Of Climate Change lies not only in the remarkable stories in and of themselves, but equally in the hope they can inspire and the women’s activism they will ignite around the world.