Wolves Are Losing Ground to Industrial Logging in Southeast Alaska

For 12,000 years, wolves have roamed Southeast Alaska’s rugged Alexander Archipelago — a 300-mile stretch of more than 1,000 islands mostly within the Tongass National Forest. Now, their old-growth forest habitat is rapidly disappearing, putting the wolves at risk. As the region’s logging policies garner controversy, a new study examines what the wolves need in order to survive. 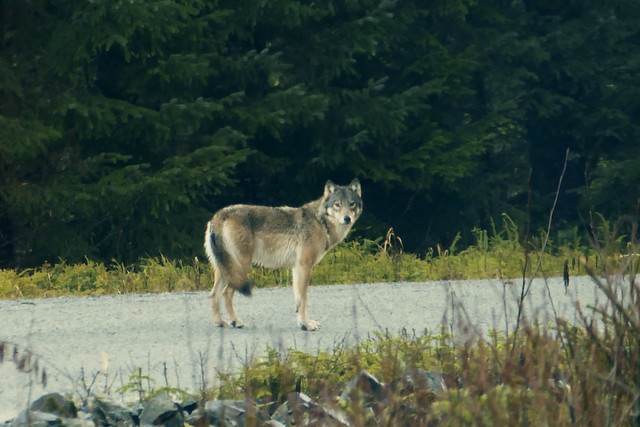 Photo courtesy of ADF&GThe Alexander Archipelago wolf is widely considered to be a subspecies of gray wolf genetically distinct from other North American populations. The wolf faces threats from logging and trapping on Prince of Wales Island in southeast Alaska.

Largely isolated from mainland wolves by water barriers and the Coast Mountains, the Alexander Archipelago wolf (Canis lupus ligoni) is widely considered to be a subspecies of gray wolf genetically distinct from other North American populations. In the 1990s and again in 2011, conservationists sought to protect the island wolves under the Endangered Species Act (ESA), but the US Fish and Wildlife Service (FWS) denied these petitions — most recently, in January 2016.

Despite their decision not to list the subspecies, in their analysis, the FWS highlighted Prince of Wales Island as the area of greatest concern for the archipelago wolves, due primarily to impacts of logging and trapping. Bigger than the state of Delaware, Prince of Wales is the largest island in Southeast Alaska and the fourth-largest island in the US, after Hawaii, Kodiak Island, and Puerto Rico. The island’s lowland hills are blanketed with temperate rainforests of spruce and hemlock and strewn with winding rivers and fjords.

Much of Prince of Wales’ scant human population of fewer than 5,500 residents makes its living from the island’s natural resources — uranium mining, commercial fishing, hunting, and harvesting timber. The Tongass, which covers most of the island, is the last national forest where the logging industry can legally clear-cut old-growth timber. “The trees are huge… it’s been the epicenter for the logging industry in Alaska,” says Gretchen Roffler, a wildlife research biologist with the Alaska Department of Fish and Game (ADF&G).

When commercial logging reached Prince of Wales in the 1950s, it hit full force. Between 1954 and 2004, 94 percent of the “contiguous, high-volume old-growth — the big trees, the really high-quality timber — was harvested,” according to John Schoen, retired senior conservation biologist with ADF&G. “That’s a huge impact.”

“Prince of Wales Island is basically a patchwork of the remaining old-growth and then second-growth in various stages of reforestation,” Roffler says. “Everything from clear-cuts to older second-growth.”

Today, logging roads etch elaborate curlicues into the island’s topography. The extensive road system provides hunters and trappers with easy access to the wolves, which are simultaneously prized for their pelts and regarded as competitors that steal hunters’ deer. According to Roffler, 60 wolves were hunted or trapped last year, 2 illegally. The total number of wolves killed without permits is, of course, impossible to obtain. Roffler says that ADF&G estimated that 231 wolves inhabited Prince of Wales and surrounding smaller islands in the fall of 2017.

Although hunting and trapping have the potential to eradicate wolves in the short-term, habitat loss from logging poses an even greater long-term challenge for wolf survival, says Roffler, whose study of wolves on Prince of Wales was recently published in Forest Ecology and Management. Logging primarily affects wolves by reducing habitat for deer, their primary source of prey. To learn more about which pieces of the fragmented landscape the wolves tend to frequent, Roffler and her team distributed radio collars among 13 wolves in 7 packs. The radio collars transmitted wolf locations for up to two years per animal, allowing unprecedented insight into their movements.

Roffler and her colleagues found that the island wolves used a variety of habitats: open meadows, marshy muskegs, salmon streams, and even recent clear-cuts seasonally accommodated these adaptable animals. Wolves avoided areas with high road densities during the spring denning season and summer, but strongly selected these areas during the winter. They spent much of the fall and winter hunting Sitka black-tailed deer in low-volume, old-growth forest. There, the tree canopies act as umbrellas, catching much of the snow. According to Schoen, deer need old-growth forests to access food during the winter.

Roffler’s research showed that wolves, like deer in previous studies, consistently avoided younger forests. Logged 25 to 30-plus years ago, young-growth conifer forests replace clear-cuts in accordance with the ecological principle of succession. The trees’ interlocking branches keep light from reaching the forest floor, where few plants are able to grow. Deer, along with most other wildlife, can find almost nothing to eat in such forests. Coined “succession debt” by scientists, this legacy from prior logging operations will impact wildlife for more than a century.

Wolves are considered habitat generalists, existing in a broad range of habitats and ecological conditions worldwide. “They live in deserts and outside of urban areas; they live in forests and out in the mountains and in the grasslands,” says Roffler. “But they are really strongly avoiding the older clear-cuts on Prince of Wales Island. And that’s significant because there’s a lot of land area moving into that kind of forest.”

Roffler says that deer are wolves’ primary food source. As deer populations decline, she predicts that wolves will switch to other forms of prey. She found that beavers, seasonally available salmon, bear cubs, and adult bear carcasses (abandoned by hunters) all contribute to the island wolves’ diets. But Schoen is less optimistic, stating that Prince of Wales residents depend on successful deer hunts to feed their families. He believes that as succession debt reduces deer populations, hunters will increasingly target wolves, legally or illegally, as they are perceived as depleting deer populations.

For decades, the Forest Service has struggled to reconcile the ecological value of 200- to 500-year-old trees with their economic value as timber. In December 2016, the agency, in consultation with scientists and members of the public, approved a 16-year plan to transition away from old-growth logging to the exclusive harvest of previously logged lands.

Alaska’s Senator Lisa Murkowski and the logging industry don’t like this plan. During a February roundtable discussion with Senator Murkowski, panelists lobbied to keep their access to the forest, according to Alaska Public Media. Timber company representatives pointed out that their lumber mills can’t process smaller trees. Senator Murkowski pushed for riders to the 2018 Omnibus Spending Bill that would have voided the expiration date on old-growth logging and allowed new road construction in the Tongass (new roads are normally banned in National Forests); the bill passed without the riders.

“The timber industry wants to log the high-volume, big-tree stands,” says Schoen. “It’s like picking the M&Ms out of a bag of GORP.” Since 2014, Schoen has collaborated with other preeminent scientists working to end clear-cutting in the old-growth forest. “I think, if the timber industry had the opportunity, they would continue clear-cutting the rare, big tree, old-growth forest in the Tongass for probably the next 10 to 15 years, until those valuable trees were gone. After that, they would pull out.” Disheartened by how long the Forest Service has taken to protect these trees, he adds, “That kind of forestry is unsustainable and would do great damage to the fish and wildlife resources of the Tongass, the only national forest where old-growth is still allowed to be clear-cut.”

Former chief of the Forest Service Mike Dombeck recently argued for protecting Tongass old-growth in the New York Times. Dombeck concluded, “To restart road building in Alaska’s most pristine national forests will only repeat history, leading to more lawsuits and uncertainty while undercutting the region’s economic bases of fishing and tourism.”

“I think there’s a serious conservation concern,” says Schoen. “The science community recognizes that old-growth forests are rare. They’re highly valuable, not just for deer or wolves or marbled murrelets or goshawks. They’re valuable really as an endangered ecosystem.”