The globe’s 1.2 billion Catholics are poised to become a major force for environmental protection
Bill Patenaude

A visit to the Vatican by the United Nations Secretary-General Ban Ki-moon on Tuesday demonstrated the growing relationship between the Catholic Church and the global environmental movement. The timing of the visit called attention to Pope Francis’s upcoming statement on ecology, while bolstering preparations for important international climate talks in Paris this December. 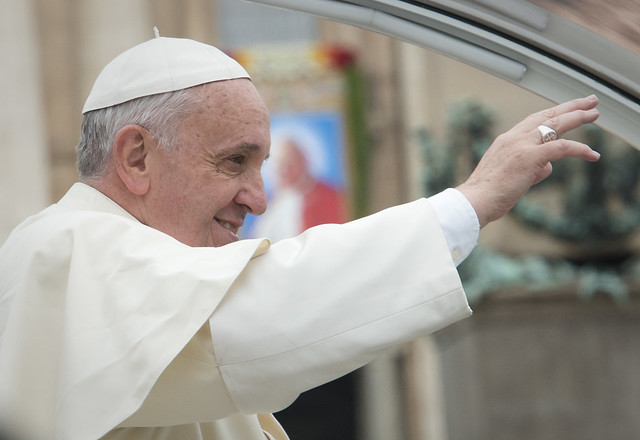 “We have a profound responsibility to the fragile web of life on this Earth, and to this generation and those that will follow,” UN Secretary-General Ban Ki-moon said at the day-long Vatican conference on climate change and sustainability. “That is why it is so important that the world’s faith groups are clear on this issue – and in harmony with science. Science and religion are not at odds on climate change. Indeed, they are fully aligned.”

To be perfectly clear: This is a huge deal. Tuesday’s events in Rome promise to fundamentally reshape global environmental advocacy by giving new moral force to the efforts to protect the planet. At the same time, the Church’s heightened involvement with environmental issues will enlist hundreds of millions of new people into the movement for environmental protection.

The Catholic Church has been engaged in ecological issues for decades. In particular, the Pontifical Academy of Sciences (a sort of Church-based think tank) works with the scientific community to help facilitate communication about the needs of the planet and its peoples. Last May that pontifical academy teamed up with its sister group, the Pontifical Academy of Social Sciences, to hear from high-ranking natural and social scientists about how to live sustainably while caring for life on Earth. Things went so well that participants asked the Vatican for regular meetings to keep the conversation moving.

The academy fulfilled that wish with a follow-up gathering held at the Vatican on Tuesday. Joining in was the Pontifical Council for Justice and Peace, most especially its president, Cardinal Peter Turkson of Ghana.

Cardinal Turkson is an important name in the Church’s efforts for caring for the poor, food security, and environmental protection. His comments at Tuesday’s meeting were some of the most blunt and urgent to date — even more so than a talk he gave in March in Ireland, which many said provided the “coming attractions” of Pope Francis’s encyclical on ecology.

“Today, the ever-accelerating burning of fossil fuels that powers our economic engine is disrupting the earth’s delicate ecological balance on almost-unfathomable scale,” Cardinal Turkson said on Tuesday. “Climate-related disasters are a reality both for poor countries on the margins of the modern economy and for those at its heart.”

As for solutions? The cardinal said, “The wealthiest countries, the ones who have benefitted most from fossil fuels, are morally obligated to push forward and find solutions to climate-related change and so protect the environment and human life. They are obliged both to reduce their own carbon emissions and to help protect poorer countries from the disasters caused or exacerbated by the excesses of industrialization.”

This got the attention of many. With the pope’s yet-to-be-released encyclical creating a buzz among those gathered in Rome, there was anticipation that the document could influence the representatives of some 200 nations when they meet in December to hammer out an international agreement on carbon emissions and climate change risk reduction.

But will the opinion of the Roman Catholic Church and Pope Francis really matter? The Secretary-General of the United Nations thinks so. And there are two reasons he may be right.

Long before the election of Pope Francis, his predecessors were weaving ecological concerns into Church teachings. They taught that environmental issues and issues of human dignity (like abortion and contraception) are linked. And that means that for Catholics all these issues should be important.

While perhaps underappreciated outside the Church, Pope John Paul II and Benedict XVI quietly influenced generations of priests, religious, and lay Catholic educators about environmental protection. As a result, Pope Francis’s encyclical has become one of the most highly anticipated documents in the recent life of the Church. Its release is expected to fuel existing momentum at local levels — in parishes, dioceses, and religious orders — in ways that would not have been possible without some four decades of preparation.

This is one reason why the United Nations (as well as global environmental groups) are eager to work with the Catholic Church’s ready-made, worldwide network of bishops, priests, nuns, and the other 1.2 billion Catholics — some of whom are community and national leaders and all of whom will have (to some degree) been made aware of how protecting God’s creation is linked to protecting human life and dignity.

The working relationship between the Church and the United Nations is also benefiting from Pope Francis’s experiences in South America. His background offers a different credibility than his European predecessors. For Pope Francis, issues of ecology are linked to the Latin American experiences of poverty, corruption, and the plundering of natural resources, often by first-world entities.

Experiences such as these influence how Pope Francis teaches the Church about global injustices — including social inequality and steady destruction of the natural world. Cardinal Turkson, who sees similar issues in Africa, can thus sympathize with (and thus uniquely work with) Pope Francis on such matters.

So can many member-states within the United Nations, who, after all, share Cardinal Turkson’s view that wealthy countries must protect the environment and human life by tackling climate change and reducing their outputs of carbon dioxide.

Certainly the United Nations leadership and the Church do not always agree. But they do when it comes to human sustainability on a fragile planet. Now, this union of faith and international governance is dramatically elevating the moral imperative of the environmental movement. It’s also connecting environmental protection with the necessity for you and me to hear and respond to the cries of the poor and marginalized — and to those billions of birds, animals, and other forms of life who have no voice at all.