The author of Desert Solitaire and The Monkey Wrench Gang is branded a misanthrope and a hypocrite. The truth is more interesting.
Ben A. Minteer

There seems to be a good deal of interest in Edward Abbey these days. Two new books — All The Wild That Remains by David Gessner and Finding Abbey by Sean Prentiss — explore the life and legacy of the writer and wilderness firebrand. Next month, they’ll be joined by Abbey in America, a multi-author collection of personal and scholarly reflections on Abbey’s continuing influence (full disclosure: I’m one of those doing the reflecting). 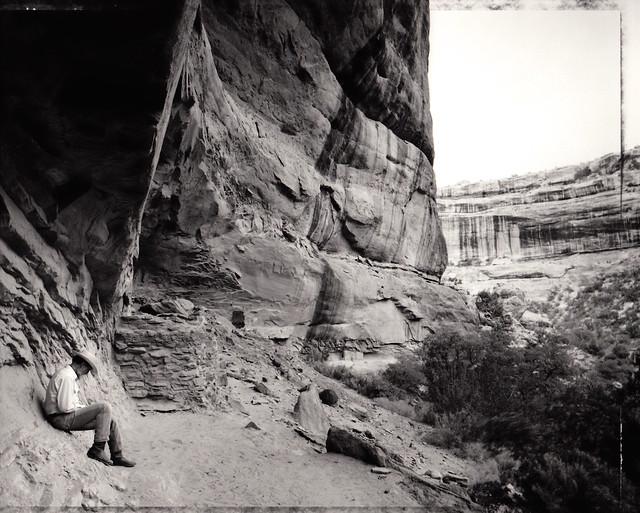 This little burst of attention to Abbey shouldn’t be that surprising. He’s been at the center of conversations (and more often than not, arguments) about wilderness preservation and environmental politics since the publication of his 1968 classic, Desert Solitaire, a captivating mix of nature writing, environmentalist polemics, and autobiographical musings. His raucous 1975 novel The Monkey Wrench Gang, about a group of environmental merry pranksters and saboteurs running wild in the American Southwest, would further cement Abbey’s reputation (for better or worse).

Given that Desert Solitaire is often mentioned in the same breath as Thoreau’s Walden and Aldo Leopold’s A Sand County Almanac, the renewed interest in the prickly avatar of the desert Southwest makes some sense. But, at the same time, the Abbey renaissance is fighting some newly powerful intellectual and political currents within American environmentalism.

It boils down to first principles: Abbey’s ideal of wilderness as a realm “beyond the human” was the bedrock of his philosophical approach to the wild. It’s a vision in which the wilderness provides an alternative set of values, an ethos counter to the uniformity, artificiality, and technological control of modern life. The wild provided an opportunity for a type of freedom and experience, he believed, that just wasn’t available in more overtly humanized and technological environments. But appreciation of the wilderness was for Abbey also a deeply moral act, an expression, he writes, of “loyalty to the earth, the earth which bore us and sustains us, the only home we shall ever know, the only paradise we ever need—if only we had the eyes to see.”

Beyond the human. It was a foundational belief for Abbey, but many scientists and environmentalists today would argue that it reflects an outmoded, even reactionary image of the wild as we push deeper into the twenty-first century. Abbey’s celebration of wilderness as a place apart seems to have become eclipsed by our growing understanding of the power and reach of the human enterprise — and the resulting imprint of this insight on our environmental imagination.

Much of this new thinking has been captured in the meteoric rise of the “Anthropocene” idea, a concept that’s migrated to environmentalist circles from its origins in discussions about naming the current geological period of human dominance on the planet. Originated by the Nobel-Prize winning atmospheric chemist Paul Crutzen and first promoted to the wider scientific community in an article published in the journal Nature in 2002, it’s an attempt to recognize the full suite of planetary changes driven by humans: extensive land transformation, mass extinctions, control of the nitrogen cycle, water diversion, and especially anthropogenic tampering with the atmosphere through the emission of greenhouse gases.

What had been the environmental foundation upon which people acted — the wilderness — was now another expression of the human presence. Crutzen argued that these changes, which he traced to the beginnings of the industrial era in the late eighteenth century, mark the beginning of a new geological period, the “Age of Humans.”

Abbey, for what it’s worth, recognized the partly invented nature of the places we call (and manage) as wild on the landscape. “The boundary around a wilderness area may well be an artificial, self-imposed, sophisticated construction,” he wrote in The Journey Home, “but once inside that line you discover the artificiality beginning to drop away; and the deeper you go, the longer you stay, the more interesting things get…”

Despite such qualifications, though, Abbey has clearly become a polarizing figure to a new breed of environmentalists grappling with the implications of this more intensively humanized and technological world. No doubt much of this is due to the enduring power of the Abbey myth: “Cactus Ed” the desert anarchist, zealous defender of the wilderness, the Luddite and misanthrope who’d “rather kill a man than a snake.”

It’s an image partly cultivated by the man himself, of course, but it obscures more than it reveals. And when we fail to understand that, it can lead to some pretty reckless assessments of Abbey’s work and his environmental legacy.

A case in point is Peter Kareiva, one of the more visible conservationists working today (and currently the Chief Scientist at The Nature Conservancy). In a series of publications, talks, and videos, Kareiva has called out Abbey’s vision as misguided, even destructive for environmentalism in the Anthropocene. He’s gone so far as to brand Abbey a hypocrite and a liar for waxing poetically about solitude in the desert southwest while at the same time expressing (in his journals) profound feelings of loneliness. Kareiva makes much of the fact that Abbey wasn’t really alone during the time he spent as a ranger at Arches National Park in the late 1950s (the experiences that inform Desert Solitaire); he had his wife with him.

What Kareiva doesn’t seem to understand is that the Abbey of Desert Solitare was in many respects a literary character, a rascally invention. Although based in fact, the narrator of Desert Solitaire was in an important sense a product of Abbey’s aesthetic imagination.

In other words, Desert Solitaire shouldn’t be read as a work of science journalism. Like Walden, the book artfully compresses the experiences of two-plus years into a single “season in the wilderness.” As Abbey’s biographer James Cahalan writes, the author’s family is left out of the picture for both personal reasons (Abbey’s marriage was on the rocks during the time; he’d soon divorce) and also aesthetic ones. But that’s what writers do.

Even Abbey’s journals — the evidence Kareiva puts forward to “out” Abbey as something other than a desert solitaire — were partly works of the author’s imagination. “I never wanted to be an environmental crusader, an environmental journalist,” he told an interviewer in 1977. “I wanted to be a fiction writer, a novelist.”

But if this blinkered reading of Abbey as the anti-modern, misanthropic environmentalist misses the literary nature of the work, it also looks past his more tempered thinking and writing, with the effect of rendering the latter all but forgotten.

But recall the philosophical punch line of Desert Solitaire: “Balance, that’s the secret. Moderate extremism. The best of both worlds.” Hardly the words of a radical primitivist. Or how Abbey similarly commends (in Abbey’s Road), “a wholesome and reasonable balance between industrialism and agrarianism, between cities and small towns, between private property and public property.”

Or, more pointedly, how about when he writes In The Journey Home that the “sweet aching loneliness” of the desert is ultimately not enough, and that “we must save the city” because it’s “the essence and substance of us all — we cannot lose it without diminishing our stature as a nation, without a fatal wound.”

It’s a sentiment that very well might have been uttered by the urbanist and architectural critic Lewis Mumford. Mumford, it should be noted, was one of Abbey’s literary heroes — and one of two American writers he felt was deserving of the Nobel Prize (the other being his former teacher, Wallace Stegner).

The desire to balance wild and civilized animates some of Abbey’s best and most mature work. Not surprisingly, it’s also his most careful and restrained.

But there’s a further problem with calling Abbey a charlatan for rhapsodizing about being alone in the wilderness while at the same time feeling isolated, even lonely. It reveals a naïve understanding of the psychological complexity of the human experience of solitude and belonging in the wild in the modern age.

As historian Patty Limerick points out, Abbey, like many of us, wanted isolation and he wanted kinship; it was part of a series of paradoxes that he wrestled with throughout his work — and, we might say, throughout his life. For him, there was no contradiction between loving solitude and craving companionship, between recognizing the partly constructed nature of the wild while cherishing its authenticity, between passionately defending wild country and throwing empty beer cans out of a gas guzzler on the highway. (That last one may have been one paradox too many. Nobody’s perfect.)

Abbey’s calls to exercise restraint and self-control on the landscape, to protect wild country not just from destruction, but also from other forms of significant human manipulation and control, remain vital today more than 25 years after his death.

I think Abbey’s arguments take on even greater importance in light of current trends in environmentalism celebrating a more aggressive vision of human stewardship on the planet, philosophies that travel under banners like “EcoModernism” but that in truth often describe a kind of eco-prometheanism: a celebration of human power and technological ingenuity on a world increasingly said to be of our own making.

Unlike the new EcoModernists, Abbey took a much different lesson from the fact of human influence on the landscape, a conclusion that was evident to him decades before any fancy scientific talk about the Anthropocene.

In a 1987 letter to Wilderness Magazine, Abbey made it clear that our ability to change and manipulate the wild wherever it existed wasn’t justification for taking these actions. “Simply because humankind have the power now to meddle or ‘manage’ or ‘exercise stewardship’ in every nook and cranny of the world,” he wrote, “does not mean that we have a right to do so. Even less, the obligation.”

It’s an insight we’d do well to heed today, even in — and maybe especially in — the age of humans.