The Red River Gorge in eastern Kentucky has a reputation of being one of the most beautiful places in the southeastern United States. This canyon system has over 100 natural sandstone arches, scenic waterfalls, high cliffs, and rock shelters, making it a popular destination for hiking, camping, and, especially for rock climbing. 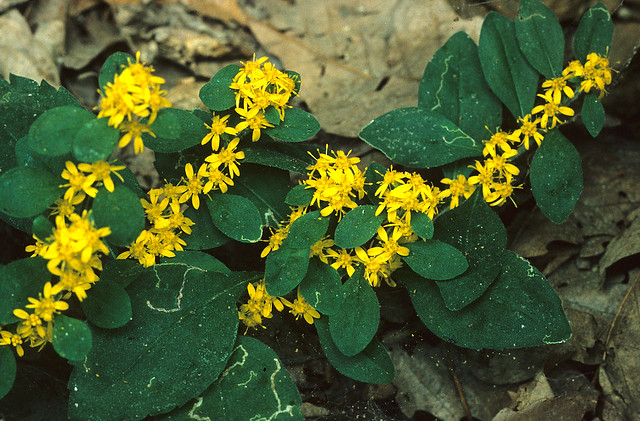 Photo courtesy of US Fish and Wildlife Service Southeast Region The white-haired goldenrod only grows in the cracks and crevices of sandstone cliffs in Kentucky’s Red River Gorge.

It is also the only place in the world where the white-haired goldenrod grows. This perennial plant’s habitat is restricted to cracks and crevices of the sandstone cliffs in the Gorge. It can also be found in the floors and ceilings of rock shelters, but only in partial shade behind the dripline. The white-haired goldenrod was listed as threatened under the Endangered Species Act (ESA) in 1988 due to habitat destruction from activities like rappelling, rock climbing, hiking, and camping. Conservation efforts by Daniel Boone National Forest, the US Fish and Wildlife Service, and the Kentucky State Nature Preserves Commission successfully restored the plant’s population, and in 2015, it was proposed that the white-haired goldenrod be taken off the Endangered Species List.

The proposed delisting for the white-haired goldenrod is a significant accomplishment for conservation. According to the Environmental Conservation Online System managed by the US Fish and Wildlife Service, there are a total of 2,339 species of plants and animals listed as threatened or endangered. Not counting species that were delisted because of extinction or a data error, only 29 listed species have ever been delisted due to recovery.

“I consider the white-haired goldenrod to be synonymous with the [Red River] Gorge because it’s the only place on Earth where it grows, so it is very satisfying to see the plant doing well there and to know that its chances for continued survival are very good,” says Michael Floyd, a fish and wildlife biologist whose focus is the listing and recovery of endangered and threatened species at the USFWS.

“Protecting these populations not only protects the white-haired goldenrod, but the whole natural community within these rock shelters, as well as the archeological factors,” Littlefield says.

The unique thing about this particular conservation effort is that it managed to successfully bring white-haired goldenrod populations back to healthy numbers, while also encouraging people to continue to visit the area for climbing, hiking, and camping. Climbers still flocked to the Gorge during the restoration effort that lasted over two decades.

Photo by James Fenwick James Fenwick The Forest Service redirected trails and installed protective fencing to direct climbers and hikers around sensitve white-haired goldenrod habitat in the Gorge, where outdoor tourism plays an important role in the local economy.

Based on a 2015 study conducted by Eastern Kentucky University, climbers spend $3.6 million per year and generate $2.7 million in revenue for businesses in the Gorge, which is located within some of the poorest counties in America. The demand for climbing also created 39 full time jobs in the area. Heavily restricting climbing access to protect the white-haired goldenrod would seriously hurt the tourism industry, and therefore the local economy.

According to the USFWS, only 26 of over 770 climbing routes in Daniel Boone National Forest were closed during the restoration efforts. Over the past two decades, the Forest Service redirected trails and installed protective fencing around habitats to keep climbers and hikers out of sensitive areas. Informational signs were placed at these protected areas, as well as at trail heads, camp grounds, and popular climbing hangouts to educate visitors and hopefully discourage them from disregarding the fences. Additional back-country patrols were also enacted. While the Forest Service tackled these efforts, the Kentucky State Nature Preserves Commission monitored the plant’s populations and kept detailed surveys from 1996 to 2013, according to the USFWS. These surveys logged data such as population size, habitat condition, and threats close to each occurrence and their severity.

Floyd says that even though the wire fencing they installed around sensitive areas was only about two feet tall and could easily be crossed, most people were respectful of the barriers, and thus were not a hindrance to the restoration project.

“The majority of Gorge visitors were very understanding of our efforts to protect the species and complied with our requests to stay away from certain rock houses or limit their activities in certain areas,” he says. “We would like recreational users of the Gorge to continue to be aware of the species’ presence so that they can recognize it in the field and be able to avoid sensitive areas where the species may occur.”

The 1993 recovery plan for the white-haired goldenrod said the plant would be considered for delisting when at least 40 geographically distinct, self-sustaining locations were protected and maintained for 10 years. As of now, there are 117 separate occurrences of the white-haired goldenrod, and over 117,000 stems. Daniel Boone National Forest is home to 111 of these populations, and the rest are on privately owned land. Of the 117 separate occurrences, 81 are stable, and 46 are stable, self-sustaining, and protected, qualifying it for delisting.

According to Littlefield, the Kentucky State Nature Preserves Commission is currently working with Missouri Botanical Garden to seed bank the white-haired goldenrod for future conservation efforts. This includes collecting, cleaning, drying, recording, and storing the seeds at a low temperature.

Protective fencing wire remains in place around the most sensitive populations, and informational signs and photos continue to be posted at trailheads and campsites.

“I think the take-home message related to the white-haired goldenrod is that species conservation can often be achieved while still allowing the public to enjoy natural areas where the species occur,” Floyd says. “There needs to be a balance struck between visitor use and the protection of important habitat areas used by the species. Cooperation among stakeholders is key, and it may require some creative solutions like the Forest Service’s idea of using chicken wire as protective fencing.”