Environmental disasters oozing from man’s follies are all too familiar. But what about the environmental serendipities? The unexpected habitats where souls and eagles soar? Some of those places can be found by following the water back from your faucet to its source. 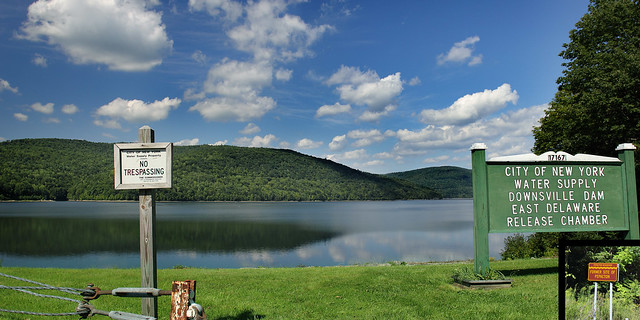 Before New York and Boston were baseball competitors, they shared a certain wisdom about the design of their drinking water supplies. To Boston’s west sits the Quabbin and Wachusetts reservoirs. North of New York City stretches that great metropolis’ water sources — the Croton and Catskill-Delaware watersheds. Gravity is a good friend to these port cities. Both receive their water, largely unfiltered and un-pumped, from protected watersheds in the hills.

Back in the nineteenth century, stagnant, foul water and a spate of dysentery could lose you an election. Angry communities clamoring for water made nasty headlines and pushed politicians to direct engineers and urban planners to find safe water sources. With populations booming in the 1800s, Boston and New York looked to their hinterlands to quench their growing thirst.

Development of rural water sources wasn’t a walk in the park. Rural communities don’t tend to be enamored with ceding control of their natural resources to satisfy insatiable urban areas on a seemingly never-ending trajectory of expansion and encroachment. New York and Boston’s rural neighbors were no exception. And for good reason. Many of these communities were flooded to create reservoirs, and fences were erected to keep people out of protected watersheds.

Leaving aside that ill will for a moment, the immediate consequence of tapping distant source water was a steady, healthy flow to the cities, far from urban contaminants. Slower to emerge, were expanses of wilderness, which surfaced as flooded rural towns rotted under reservoir silt. Today, the New York watershed protects 1972 square miles of land and the Boston watershed protects another 156 square miles — a combined landmass considerably larger than Yosemite National Park, and one which is a valuable habitat for moose, fishers, and bears. These watershed protection programs are stitched together with a mosaic of city, state and federal ingenuity, with contributions for example, from the US Forest Service, the Department of Agriculture and the Water Resources Development Act Projects (WRDA).

The legislative and administrative tinkering to protect watersheds has to be nimble and creative to fend off creeping suburbanization, dissolve the aforementioned ill will and seek the sweet spot of urban-rural coexistence. Billions of public dollars have been spent to purchase land and hammer out conservation easements — agreements with landowners to abide by strict land use rules in exchange for property tax reductions. New York City, particularly, is famous for developing programs that pay for environmental services. That is, programs which principally use economic incentives rather than government regulations to encourage land-conservation and watershed protection by landowners.

The ecosystem services model is especially well suited to New York where, unlike in Massachusetts, a high percentage of the watershed is still owned privately. To incentivize dairy farmers to keep cow excrement from streams that flow into drinking water reservoirs, in the early 90’s, the New York water authority built into its budget — and into ratepayers’ bills — a line item for the local Watershed Agricultural Council to help farmers improve their manure management systems. The farmers reached out to neighbors to grow the program and ultimately achieved the critical mass needed to guarantee New York City’s clean water. The big stick of regulation was looming, but it was carrots that closed the deal.

The US Environmental Protection Agency had been dubious about this model. Across the country, their cookie-cutter solution was the construction of water treatment plants to meet federal clean water standards — commonly known these days as “grey infrastructure” solutions. But the EPA was so pleased with the clean water resulting from New York’s “green infrastructure” program, which let nature do the heavy lifting, that it allowed New York City to forego building a filtration plant, saving ratepayers billions of dollars. Energy use reductions have been equally impressive.

By paying rural landowners for ecosystem benefits, urban water consumers in New York City and Boston have contributed to building and protecting wild areas outside of city limits. One can debate whether the resulting system is financially fair — in truth getting water urban users to create wilderness areas may be a form of regressive taxation, depending on how the water utility structures its rates. But the results of these water utility source protection programs are unmistakable: Clean water and wilderness.

That holy grail of urban-rural harmony is still a work in progress. A deer hunter, tracking an animal and thwarted by a Massachusetts Department of Conservation boundary may not be a happy hunter. But over the years, restrictions on human activity in watershed areas have softened. In a pilot program, New York City discovered that it could allow boating and hiking in some areas that had earlier been closed to recreation without sacrificing water quality. In some cases, the state even permits sustainable timber harvesting. The easing of restrictions can be a boom to the local economy. Local wilderness guides running fishing expeditions on public waters and locally-owned kayak rental businesses are on the rise in these watershed areas.

The Massachusetts Resources Water Authority, which sells wholesale water to the Boston Water and Sewer Commission, likewise seeks to make Boston-based consumers aware about the rural source of their drinking water. The water authority recently sent an explanatory insert with my water bill, mapping how my tap water travels to my faucet. The informative piece, a kind of hydrology 101, noted that Boston won the American Water Works Association prize for best tasting drinking water in the United States. The New York and Boston water utilities want their customers to understand their water’s rural roots. An informed customer is a good water citizen, an advocate for conservation and vibrant rural communities, and perhaps a voter against future fracking in the watershed.

As the world’s population spikes, and more people migrate to urban areas, cities will have to grapple with their uncomfortable dependence on rural areas for water. Smart water utilities, like those in New York and Boston embrace nature and the human communities that exploit and steward ecosystems. They offer an important example of urban planning that can bring benefits to urban and rural regions alike. The “accidental wilderness” their forward-thinking strategy has produced, allows us to drink deeply from the same source as bears and loons.