When the Levee Breaks

From this vantage point, the deck of a cargo ship skims by above, beyond the fragile levee wall that holds back the mighty San Joaquin River. It passes effortlessly through the wide flat river that, due to the levee and the perspective, is completely out of view on a crisp winter morning. With the ship’s submerged propeller probably somewhere around forehead-level, this perspective would normally require immersion in the relevant body of water — no place for a few wetland engineers and scientists like us.

Photo by Kyle Seewald Hemes Ecologists are restoring and enhancing some 300 acres of wetlands on Sherman Island as part of the Mayberry Farms Project. The project is expected to help reverse land subsidence and sequester carbon dioxide, and is part of broader restoration work in the California Delta.

A few centuries ago, standing in this same spot on the edge of Twitchell Island in California’s Sacramento-San Joaquin River, we would have been covered in ten or twenty feet of peat: dark, pungent, carbon-rich soil — the muck of thousands of years of decomposing plant matter and bacterial corpses. It would have enveloped anyone there, bubbling through their entrails and seeping under their toenails, like being embalmed in a thick microbial stew. Today, our small group is merely dusted with the black sediment that, since being drained and exposed to the atmosphere, is kicked up by wind that blows steadily from San Francisco Bay, to the west. This island, like all the islands that make up the Delta, is a bowl ringed by precarious levee walls, anchored in a network of rivers and channels, emptied of its carbon-rich soil by a century and a half of human meddling.

Life Amid the Levees

Will the California delta survive the pressures of a thirsty state?

The San Joaquin-Sacramento Delta is at the center of a far-reaching debate about water use in the Golden State that has left many wondering about the future of this region.

As the water level rises outside, and the land surface sinks inside as drained wetland soils decompose in the presence of oxygen, ever more pressure builds on the levees that are meant to protect these fertile agricultural lands from inundation. Here at the tired heart of California’s water system, from which water is pumped to the farthest reaches of California’s thirsty domain, this pressure is building. Cataclysmic levee failure could debilitate the state’s water-transmission system, not to mention the livelihoods of the people living on these lands.

Recognizing that the current system is not sustainable, and that ecological restoration in the region could help rebuild soils and address challenges surrounding land use, climate change, and water, a team of practitioners and scientists is envisioning a new Delta. A Delta in which wetland vegetation is cultivated, soil is rebuilt, and carbon is sucked out of the atmosphere, back into the vegetation and peat soils from whence it came. A massive wetland restoration experiment is underway here — and its outcome could help determine the future of California’s linked water and carbon challenges.

Where three years ago plumes of oxidized peat soil blustered around as the cargo ship skimmed by above, today the same plot on Twitchell Island looks remarkably different. Just a few years since being re-flooded and planted with wetland species, bright green stalks extend from the water towards the sky, waving gently in the westerly breeze. Instead of soil particles being kicked up by the wind, this restored wetland has trapped the soil, and with it the organic carbon that makes it up. With every year, new carbon-rich soil slowly accumulates under the placid tea-colored water.

Close to 800 acres of freshwater wetlands were restored on Twitchell Island in the early twenty-tens as part of what is now known as the California Eco Restore project, the partner program to the exceedingly controversial California Waterfix proposal. (More commonly known as the “twin tunnels” project, WaterFix would see a revamping of the struggling system that diverts large quantities of freshwater from the Delta for transport across the state.) The state plans to restore 30,000 acres of Delta wetland habitat through EcoRestore, restoration work that will be funded in large part by the water districts on the receiving end of Delta water diversions. 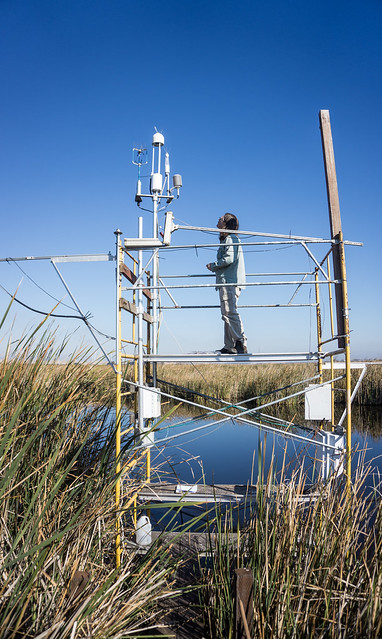 Photo by Kyle Seewald Hemes A scientific tower houses a gas analyzer, which detects greenhouse gas
moving into and out of the Delta ecosystem.

Anchored in this now-flooded peat soil, a scientific tower made of yellow scaffolding rises toward the sky. Its two levels support the researchers as they prod the sensors and control panels that keep track of the data being collected here. Despite his slight fear of heights, the climb up the canary-yellow scaffolding, textured with crusted white splotches of bird feces, is no sweat for Baldocchi. He has been measuring the breathing of the biosphere for as long as anyone — since the era when the instruments were “built from scratch” and researchers were lucky to get “a few hours of data.”

More than a third of the emissions that humans have spewed into the atmosphere globally since 1850 are associated with changes in how the earth’s surface takes up and releases greenhouse gases, through activities such as agriculture and deforestation. To detect these changes, we need sophisticated sensors working continuously in the field to measure daily and annual cycles. The gas analyzer — the pinnacle of the scientific tower — does the hard labor of the long-term field campaign. A small colony of these sensors is mounted to the top corner of the scaffolding, just within reach for Baldocchi as he balances on the railings to take a look. In the right light, if you squint hard enough and ignore the metal bird spikes that keep the migrating waterfowl from perching atop the instruments, you might just be able to imagine the infrared beam being snapped back and forth between the mirrors, detecting the greenhouse gases on their way into or out of the landscape.

Carbon dioxide moves in two directions: out of the land surface via plant and soil respiration and into the land surface through photosynthesis. With the advent of big data and small computers, researchers like Baldocchi can record the exchange of carbon dioxide or methane over an entire upwind landscape from a solar-powered meteorological tower. These flux measurements, as they are called, have changed the game when it comes to sniffing emissions over an ecosystem. These measurements allow “ecologists to measure things that ecologists always wanted to know,” Baldocchi explains.

Back on that tower, with the plug of an ethernet cable and a few clicks on the trackpad, the antiquated field laptop ingests the wisdom from the sensor mounted above. The notebook suddenly contains the last two weeks of data describing the inhalations and exhalations of this ecosystem below us, measured 20 times every second. The figure that emerges looks strangely like a heartbeat: a patterned pulse of ups and downs, varying on multiple timescales, repetitive but with momentary spikes. It’s the universal glyph of a system alive. These last two weeks of data will be added to a multi-year record of this restored wetland, a kind of intensive patient history for the ecosystem since it was seen for a major ecological surgery: restoration.

California has enacted some of the most ambitious climate change regulations in the United States, and the role of California’s landscapes in mitigating global warming may come center stage as these regulations are implemented. California’s ground-breaking cap and trade program, for example, allows agriculture and forestry sectors to provide offsets. These are voluntary projects, initiated by farmers and landowners, which sequester carbon or reduce emissions that would otherwise occur in their farming or land management practices. Baldocchi’s work will help answer important questions about the capacity of wetlands to remove carbon dioxide from the atmosphere, and help policy-makers understand exactly how restoration work might fit into existing and future climate mitigation schemes.

With one of the longest ecosystem-scale records of the breathing of these restored wetlands, Baldocchi’s team is finding that the ability of the wetlands to take up greenhouse gases depends on a whole host of factors — including the number of years since the land was first restored, the density of the vegetation, and even the water’s salt content. Owing to the long growing season and abundant water, these wetlands are among the most productive in the world, building soils at rates of more than an inch a year, and removing relatively large amounts of carbon dioxide from the atmosphere.

But there is no free lunch, as they say, and a portion of that carbon gets re-emitted into the atmosphere as methane, a more potent greenhouse gas created by microbes in the flooded sediment. What’s more, the process of carbon sequestration is slow. According to Judith Drexler, a USGS scientist working in the Delta, the extent of the completed and planned Delta restoration projects through 2020 would result in a mere 1 percent of the Delta’s lost carbon getting sequestered back into the soil over the next 100 years. “When something takes 6800 years to form,” she says of the organic peat soil, “you can’t fix it in 20.”

As the state contends with complex water issues, long-term drought, and a hotter, drier climate, Baldocchi’s towers continue to keep tabs on the fate of these maturing wetlands. Characterizing the climatic and hydrological role of managed landscapes like these is critical to making sure California is effectively employing them as solutions in a changing climate. As sea levels rise, and the Delta keeps sinking, these restored wetlands will in part determine the future of California’s coupled climate and water challenge. The “hope of our work,” says Baldocchi, is to re-build soil and sequester greenhouse gases. “Doing nothing is not an option,” he insists. “We can’t afford it.”