Winding its way through dense forest laced with hidden waterfalls, the Whanganui River is the largest navigable river in Aotearoa, the Māori word for New Zealand. With the passage of the Te Awa Tupua (Whanganui River Claims Settlement) Bill in March, the river became the first water system in the world to be recognized as a rights-bearing entity, holding legal “personhood” status. One implication of the agreement is that the Whanganui River is no longer property of New Zealand’s Crown government — the river now owns itself. 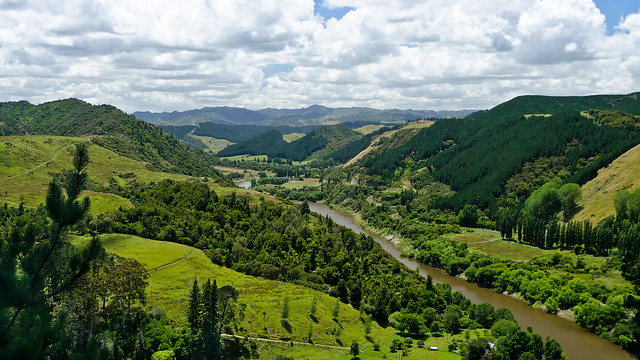 Photo by Kathrin & Stefan Marks In March, the Whanganui River in New Zealand became the first water body in the world to receive legal personhood status.

Five days after the Te Awa Tupua Bill, the High Court of Uttarakhand at Naintal, in northern India, issued a ruling declaring that both the Ganga and Yumana rivers are also “legal persons/living persons.” But what does it mean for a river, or an ecosystem to hold rights? The answer may vary from place to place.

The growing global movement for Rights of Nature — or the Rights of Mother Earth as some cultures prefer — seeks to define legal rights for ecosystems to exist, flourish, and regenerate their natural capacities. These laws challenge the status of nature as mere property to be owned and dominated by humans, and provide a legal framework for an ethical and spiritual relationship to the Earth. While recognizing legal rights of nature doesn’t stop development wholesale, it can stop the kind of development that interferes with the existence and vitality of ecosystems. In the last decade, four countries and dozens of US communities have passed laws recognizing “legal standing” for ecosystems.

In many cases, legal recognition for the rights of ecosystems reinforces long-held cultural and spiritual beliefs. For the Māori of Aotearoa, like many Indigenous cultures worldwide, there is no separation between humans and everything else. When the Europeans first arrived in the seventeenth century, there was no word for property in the Māori language. Their relationship with the Earth was one of care and responsibility. “Māori cosmology understands we are part of the universe,” said Gerrard Albert, lead negotiator for the Whanganui River iwi (tribe). “The mountains and rivers are our ancestors. Our cultural identity as a people is inseparable from the river — it is more than water and sand, it is a living spiritual being.”

Indeed, the Whanganui iwi are known as the River People, who often say, “Ko au te awa. Ko te awa ko au” translated as “I am the river. The river is me.”

Their struggle to protect the river began 150 years ago, when the New Zealand Crown government first began to break treaty promises, violate cultural practices, dam, pollute, and otherwise degrade the river. “Beginning in the 1870s, our iwi began to petition the Crown government over our concerns for the river,” Sheena Maru, iwi project manager for Whanganui River Trust, the governance group for the Whanganui River Treaty Settlement, said. “Determining who owned the bed of the river became the longest running court case in Crown history. In the end, what we were fighting for was Te Awa Tupua, the living spiritual indivisible whole of the river that includes the iwi, all people, and life from the mountain to the sea.”

In Aotearoa, the Whanganui River is not the first ecosystem to be recognized in this way. In 2014 the Tūhoe iwi negotiated with the Crown Government to pass the Te Urewera Act, which effectively recognized the “personhood” for Te Urewera, a forested region and former a national park in the heart of Tūhoe traditional territory.

Like the Whanganui iwi, what the Tūhoe wanted was to be truly reconnected with the land that is the very source of their cultural identity. Tamati Kruger, chief negotiator of the Tūhoe’s groundbreaking Te Urewera settlement said, “When negotiations began, the Crown had no intention of giving away title to the park. They thought it would be enough to offer us some money and a few seats on the park board.” Knowing the Crown would not cede ownership to the Tūhoe, Tamati’s team suggested that nobody retain ownership of the park land — rather, the land would own itself. This change shifted more than just governance of the former national park — it was also seen as a step toward sovereignty for the Tuhoe people whose identity is inseparable from the land.

The Whanganui River and Te Urewera settlements, two truly revolutionary agreements between the Māori and the Crown government, recognize mountains, national parks, and watersheds can be better protected by prioritizing human responsibilities to the whole than they can through regulations that seek to dismantle and segregate fisheries from the riverbeds, for example. Under both settlements, future decisions about projects and development in the areas will be made by a council of two appointees — one Crown and one Māori. “Those appointed to act on [the Whanganui River’s] behalf will have legal obligation to uphold and protect the river’s values and health and wellbeing,” Gerard Albert told the media at a press conference following the passage of the Te Awa Tupia Bill.

These settlements also include a formal apology from the New Zealand Crown government for historic crimes against the iwi and the ecosystems, and a large redress fund to facilitate new management of the Te Urewera mountain range and the Whanganui River. They also include funds for community education and cultural revitalization that benefit both the pakeha (European New Zealander) and iwi populations.

“The Settlement is for the entire community, this is still an idea to be grasped,” explained Hayden Turoa, Te Mana o Te Awa program manager for the Whanganui River Trust Board. “Anybody can apply for funds [through the settlement]. It is about breaking down barriers and bringing the rest of the community into this spiritual understanding.” Along the Whanganui, there are already plans for these funds, including educating and bringing pakeha residents into the Maori worldview in a way that allows everyone to be spiritually and holistically connected to the river, and to learn new ways to care for the ecosystem.

From his office overlooking the port city of Wellington, Paul Beverley, a partner at the law firm of Buddle Findlay and a member of the core Crown negotiation team for both the Te Urewera and Te Awa Tupua bills, explained that the Crown was eager not only to pass the agreements, but also to take the next steps for implementation. “The Crown is committed to working alongside Whanganui iwi to ensure the success of this settlement for Te Awa Tupua and for all — not just the Maori.”

Asked whether the pakeha populations, local government, or the Crown were nervous about the implications of ceding property claims, Beverley said, “What has been put in place is a very forward looking framework. I think we’re going to see a springboard for this type of thing. People are already taking next steps voluntarily.”

The Maori and the Crown see these new protections as good for business, and ultimately good for the economy. “This legislation recognizes the deep spiritual connection between the Whanganui iwi and its ancestral river and creates a strong platform for the future of the Whanganui River,” Beverley said.

Recognizing the rights of the Whanganui River means that no matter who the actor, corporation, or individual, the law now sees a harm to the river the same way as it would a harm to the tribe or a person. As Cabot Davis, legal director for the nonprofit Movement Rights, added: “It’s not about being anti-business. The thing that is beautiful about it is just how differently decisions will now be made. Conflicts among people who want to ‘use’ the water or land will now have to take everyone else’s needs into account — first and foremost are the needs of the [river] system. Commerce and nature can coexist in a healthy way.”

Half a world away in India, it’s not yet clear what legal personhood means for the Ganges and Yumana rivers, but activists think additional protections will ultimately be necessary. The country struggles with high levels of water pollution flowing freely from homes and industry, though water in India is considered sacred. Nowhere more so than the Ganges river, or the Ganga, which provides about 40 percent of India’s water, though the entire watershed is breaking down under the intense strains of use and abuse.

The widespread Save Ganga movement in India follows the Gandhian model for peaceful change. A powerful component of that broad coalition is the National Ganga Rights Movement, founded by the Pujya Swami Chidanand Saraswatiji, who opined, “We breathe the same air that our ancestors did, drink the same water, and are connected to one another by the web of life.” Four years ago, the movement began working with the US-based Community Environmental Legal Defense Fund (CELDF), toward passage of a national Ganges Rights Act, currently under consideration by the Modi administration. This act would provide further protections for the river.

“The High Court’s ruling declaring legal personhood for the Ganges is a critical step forward,” Mari Margil, head of CELDF’s International Center for the Rights of Nature, said. “As the court said, national legislation which would recognize fundamental rights of the Ganges and the people of India to a healthy, thriving river ecosystem is ultimately necessary.”

Treating ecosystems as property has brought humanity to the brink of climate and ecological collapse at break-neck speed. By contrast, rights-based laws recognize planetary limits and seek to transform human laws to conform with Natural Law. Beyond law, this movement seeks a culture shift away from the mindset that modern Earth is merely a resource available for reckless human use, toward the understanding that the Earth is a living entity governing all life upon it, with inherent rights that can, and should, be protected.