When A River Doesn’t Run Through It

Photographer and filmmaker Pete McBride is a lover of rivers. His work has focused on rivers around the world, including the Ganges in India and the Navua River in the Fijian headlands. In the United States, McBride’s photos and films have centered on the Colorado River, reminding us that the entire Southwest depends upon the Colorado River watershed. 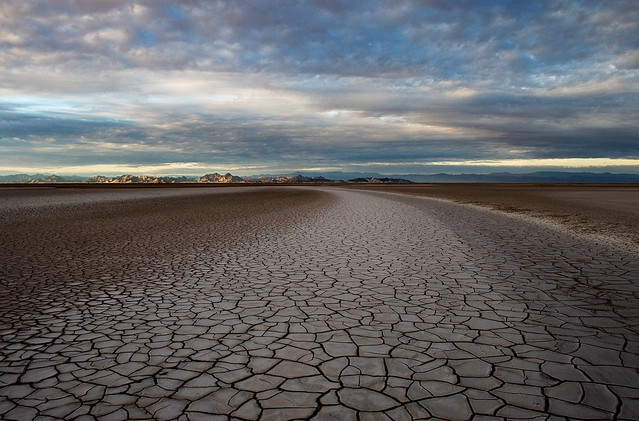 Photo by Pete McBride Fifty miles south of the US–Mexico border, the Colorado River Delta and its once-rich estuary wetlands — reduced by 95 percent since the river was restricted by dams — are now as parched as the surrounding Sonoran Desert.

McBride started off his career as a writer-adventurer who wanted to be a photographer. Connecting with like-minded souls, he ended up as the photographer for an epic re-creation of the first flight from London to Cape Town in the Silver Queen, a replica of a Vimy plane from the 1930s. Although National Geographic initially declined to support the project, the magazine bought the story after seeing photographs of the adventure, and a McBride image ended up on the magazine’s cover. Looking at those canvas covered wings I asked McBride if it was scary. “Absolutely,” he answered without hesitation. But that was the story that kicked off his career.

McBride’s connection with rivers stems from his childhood. He grew up on a Colorado cattle ranch. “I just think the river story found me,” he says. This tie to the Colorado River lead to the publication of his 2010 photography book, The Colorado River: Flowing Through Conflict. The book has had an outsized impact on the environmental community, and has helped draw attention to the grave implications of the 1922 Colorado River Compact, which divvied up water rights along the Colorado River.

Filmmaker and activist Jamie Redford credits McBride’s book with helping to drive his transition from outdoor enthusiast to thoughtful and analytical activist and environmental filmmaker. After reading the book, he went on to make Watershed, the 2013 documentary which looks at the Colorado River, and posits some solutions to the soul-crushing death of the Colorado River Delta, including trying to maintain a small, but steady supply of water to the delta by purchasing water rights from willing sellers in the Mexicali Valley via the Raise the River campaign.

Photo by Pete McBrideThe Hoover Dam on the Colorado River.

McBride’s own 2011, award-winning short film, Chasing Water, grew out of his photography book, and is arguably his most famous project. “Originally, I did a book and felt like it had a story, that I had some visuals and felt like there was an opportunity to make a short film,” he explained. “A friend (Anson Fogel) who is a very talented editor helped me to edit it.”

The film uses McBride’s own voice and his own writing to drive the story. I asked which came first, story or footage, and he explained: “I write after I’ve shot, but I’ve got the script composed in my head.”

Nothing can prepare you for the images of McBride’s trek along the Colorado River across the desolate landscape that was once lush lagoon. With those stark images, Chasing Water has become a driving force for efforts to restore the river’s flow. Activists throughout the southwest use the film to share the story of what has happened to the river and how we can turn this problem around.

McBride’s latest project, which traces the Ganges River from its source in the Indian Himalayas down to the sea, can be found in a five-part blog on National Geographic Proof. He sees the Ganges as presenting a complicated story of overuse and adoration that parallels the fate of our own big rivers in the United States.

“The Colorado serves as somewhat of a symbol of how we treat our rivers in developed countries, and I think most people are following and will follow our path and it is hard to tell them not to, if they want to have agriculture, if they want to eat more protein in their diet,” McBride said. Although the Ganges is becoming overused, he adds that it is also “believed to be sacred, many people revere it and come out and hug it… [In the US] we turn our backs on our rivers. If you are not an avid boater or fisherman, we don’t pay attention, we just expect water to be there. That is a lesson we can learn from India. We should cherish some of our sources of freshwater as sacred.”

“At the same time that people see [the Ganges] as all powerful and immune from the impacts of humans and so on the one hand, the people that are revering it are also contaminating it with spiritual offerings or funeral pyres, various other [things], [and] there’s a lot of industry…[that] dumps heavy metal waste and contaminants into the river,” he added. “That is a very complicated story, but it could be a model for what many rivers might hold in store if we don’t pay attention to them. The Ganges could be a model for what could happen to rivers if we don’t accept their fragility.”

McBride has recently turned his attention back to the Colorado River with Delta Dawn, a follow-up film to Chasing Water. Delta Dawn focuses of a pulse of water that was released into the river last spring. The water pulse, which lasted eight weeks, was initiated as part of Minute 319, a legally binding diplomatic effort organized by Secretary of State Hilary Clinton in partnership with Mexico to allow a trial pulse of water from the Morelos Dam return to Colorado River Delta in Mexico. Delta Dawn documents how the pulse rapidly re-invigorated the landscape. In the film, the land jumps up fertile and new, cottonwoods and willows thrive in the water, fish and birds appear, and above all, people on foot, on horseback and in boats cherish the temporary return of the long lost Colorado River Delta.

Discussing the possibility of another pulse, McBride said, “Renegotiation of Minute [319 is] set to happen in five years.” He indicated that some people are speculating that this could happen in three years, which is still a long time away. “We’d like something sooner rather than later, but with drought, the population growing, it’s a challenge. At the same time, even the pulse that happened is remarkable.”

When I asked him what was next, he mentioned the Sea of Cortez, into which the Colorado River should be flowing. He said that he loves working in the ocean, loves marine life. McBride and his team “have talked about doing some work down there, nothing on the books right now.” I asked about the vaquita, which are small resident porpoises of the Sea of Cortez. With less than a hundred left, they are the most endangered cetacean in the world. Long after I hung up the phone with McBride, his comment stayed with me. “I’d love to see a vaquita,” he said. “I don’t know anyone who has actually seen one.”

Here’s hoping that our next great McBride photo is of a vaquita.