When Fiction and Reality Meet: Lessons for the EU from the Danish TV Show Borgen

What can a power-hungry TV politician teach the head of the European Commission?
Erik Assadourian

As many of you probably heard, this past week, the European Parliament failed to object to a European Commission motion to include natural gas and nuclear energy infrastructure in environmentally sustainable investments. In plain English (with fewer double negatives), this means gas and nuclear are now considered “green” by the EU.

Truthfully I can’t understand the logic of this, even after reading several articles and press releases. But I think it goes something like this: in order to move beyond oil and coal, which are dirtier than gas and nuclear, Europe will include “certain gas and nuclear activities” as sustainable investments for a “time-limited” period, and “dependent on specific conditions and transparency requirements.” 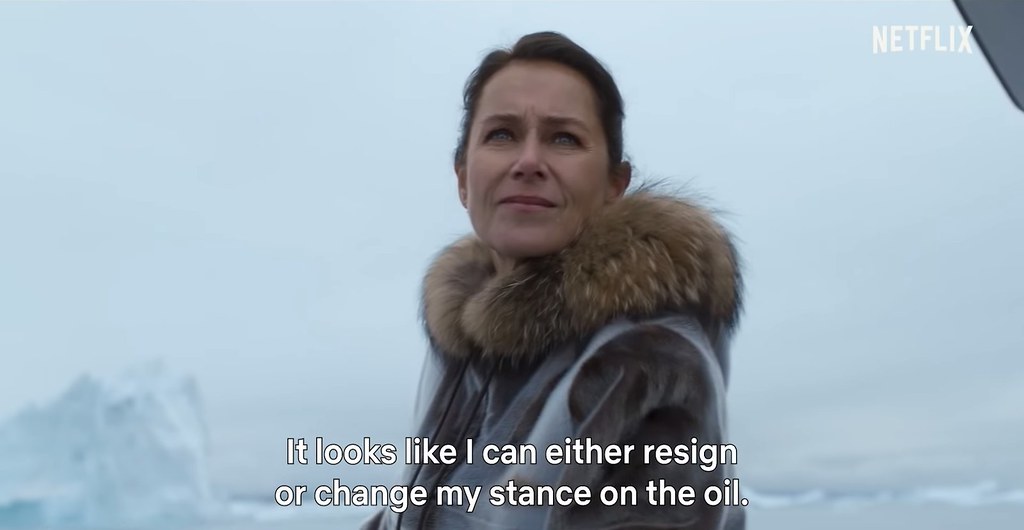 In many ways, this reminds me of the popular Danish political drama Borgen, which follows the life of Birgitte Nyborg, a centrist politician of a minor party who, against all odds, became the prime minister. After a nine year break, Borgen came back for a fourth season this year and followed an older Nyborg, who is now the foreign minister in a coalition government, and co-leader of a moderate but eco-friendly political party called the New Democrats. This season’s drama revolved around the discovery of a huge oil deposit in the Danish territory of Greenland. The New Democrats and Nyborg started the season opposed to drilling this windfall, but, caving to political pressure, Nyborg changes her stance and embraces tapping these billions of dollars of oil.

At one point, defending her flip-flop, she calls this deposit a green source of oil, as it comes from a stable country with a transparent government, not a dictatorial one (astute statements especially as this was filmed before Russia’s invasion of Ukraine).

But of course no oil drilling is green.

Ultimately, as with Nyborg, the European Parliament’s decision is driven by politics.

That Russia is making energy supplies more volatile is the pretext for passing this motion — not the driver—as this expanded taxonomy has been in the works far longer than the war in Ukraine. Further, considering there is no end in sight for the Russo-Ukrainian war, politicians know that if energy prices go too high, they will lose their elections, and possibly if prices go too high too fast, the people will even take to the streets — like the Yellow Vest protestors did in France when Macron raised oil and petrol prices too high too quickly. But more than this, the business lobbyists surely fought hard for this “important sign of the role of natural gas as a bridge to achieving climate goals,” to quote the director of Germany’s local utility association VKU.

Calling gas green is rather like eating your cake and having it too. Politicians can say they’re acting in an environmentally friendly manner while continuing to pursue the energy developments that make the most money, supply a “stable” source of energy, and that business lobbies and campaign financiers will reward them to support.

But the fact is, natural gas, even when burned with zero loss, produces CO2 emissions. And no infrastructure is perfect: there is a lot of leakage in pipelines, power plants, and drilling operations. And methane, the key component of natural gas, is a highly-reactive climate-changing gas, possibly even worse than originally feared. As this article explores, as forest fires spew carbon monoxide in the air, that CO is interacting with the atmospheric compounds that break down methane, meaning that the methane will last even longer in the atmosphere before breaking down, and accelerate warming even further.

Ultimately this idea of natural gas as a “bridge fuel” is a perfect example of what Robert Engelman has coined “sustainababble.” If gas projects can be called sustainable — even as they lock the EU into decades more of gas-reliance — then we have given up completely in trying to stabilize climate change.

And that may be true: We know that the US, where both the Congress and the courts are captured by conservative Republicans, will not be leading on climate policy. Now, if the EU calls gas and nuclear energy green, that’s a further blow.

Of course, even if they didn’t, the priority for both regions remains economic growth, which, called sustainable or not, is incompatible with climate stability in the first place (even if in the context of renewable energy, which we must acknowledge is also not green, just less gray).

But if the EU were to actually strive to turn Europe truly green, what should it do?

At the end of this season of Borgen, a chagrined Nyborg admits she made a mistake and gets the Greenland government, the Danish prime minister, and the US, which has had undue influence on the whole deal, to commit to keeping the oil in the ground. Nyborg then resigns and heads off to be the President of the European Commission.

Unfortunately, Nyborg is just a fictional character and Ursula von der Leyen, the current Commission president, is not like that. But if she were, I like to imagine that this would be the path the Commission would take. 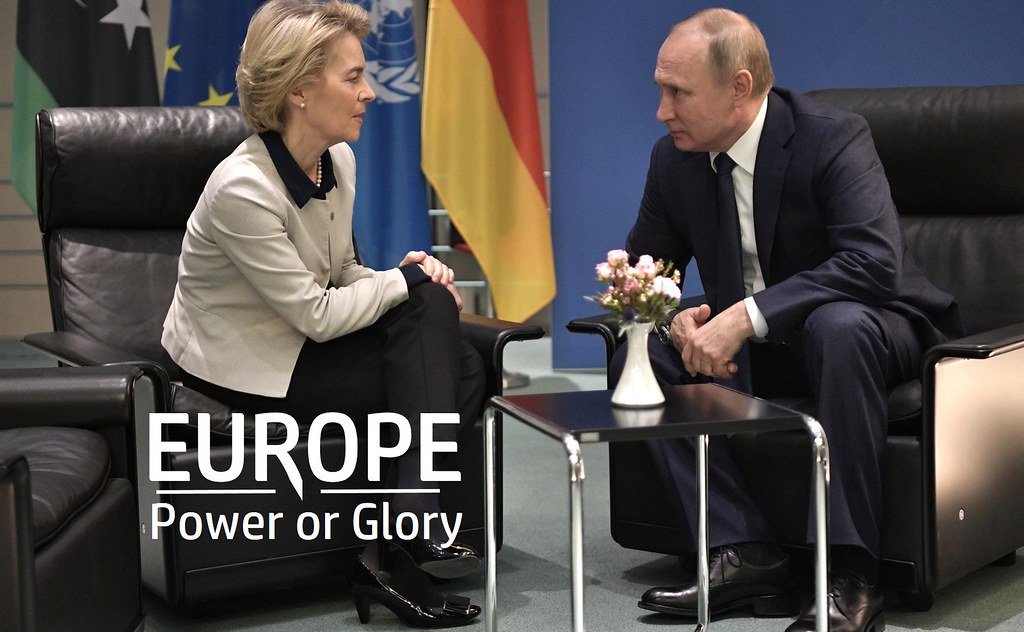 “You keep your gas, Mr. Putin, we’ll take a different path.” (Europe Trailer from Kremlin.ru, 2020 via Wikipedia, with additions by Erik Assadourian

After sustained grassroots pressure from environmentalists, President von der Leyen announces that she made a mistake and rescinds the deal. She then calls for a new agenda at the EC:

First, she promises a price floor on oil products, coal, and natural gas so that prices can never go below a certain threshold (even when the next pandemic keeps Europeans at home again for months on end and dramatically lowers demand). Any lower than the threshold, a temporary tax will stabilize the price. That will be combined with a unified EU carbon tax that increases consistently year after year. All that tax money will go to fund member states’ efforts to shift the economy to become more efficient and renewable-energy based, with the lowest-impact technologies given first priority, e.g. insulation, solar hot water, geothermal, and conversion of large homes into multi-family homes.

Of course, she’ll use the Russo-Ukrainian war as the pretext in order to keep the populace on her side. Only this time she will do it by moving away from fossil fuels, which, she will explain, is the only way to prevent the imperial Russians from taking over the world. If done well, von der Leyen may be able to hold onto power, perhaps even strengthening Europe’s political power and prestige in the process, which Borgen reminds us is as, if not more, important to politicians than preventing climate collapse.

Second, von der Leyen will anger both Germany and France by roping them into compromising on nuclear power. Germany will promise to reboot its nuclear facilities temporarily to make up for the loss in gas energy and France will commit to not building new power plants as their current ones are decommissioned. Routinely, reporters call nuclear carbon neutral, but it is not — particularly when building the concrete-intensive structures, mining, refining, and transporting the uranium, and managing and monitoring the waste for a thousand years are factored into the equation. But since the nuclear power plants already exist, and there is a great source of uranium available in the form of warheads (which can be de-enriched) this is a perfect way to reduce the threat of nuclear war and transition to a sustainable source of energy. (In a coup de grace, von der Leyen even gets the US to agree to supply the EU uranium from 1,000 newly decommissioned warheads for this effort, though activists immediately swarmed, protesting the dangerous transfer of nuclear materials across the Atlantic.)

Third, von der Leyen publicly embraces economic degrowth, stating that the era of “sustainable growth” is coming to an end. Acknowledging that the only realistic way to avert climate collapse is to reduce the size of the European economy, she appoints a new working group of economists, bankers, sociologists, diplomats, and other experts to create a 20-year plan to move the EU beyond economic growth without triggering financial crises. A tepid step, admittedly, but it is a helpful start for the banks — central and commercial — to come to terms with a future made up of negative growth rates.

And fourth and most controversial: von der Leyen announces the EU will take an active role in addressing human population growth. With EU members like Hungary encouraging — and paying —women to have four children, even as humanity shoots far beyond Earth’s limits, she acknowledges that something is clearly wrong — especially as the latest UN World Population Prospects projects human population will continue to grow to 10.4 billion by 2100 (and 9.7 billion by 2050). Von der Leyen declares her commitment to the degrowth of EU’s population, to complement its economic degrowth, and also commits to provide official development assistance to any developing countries that seek to invest in either restoring degraded ecosystem services or creating non-coercive population and sexual health programs for their citizens — from family planning clinics to comprehensive sexuality education and women empowerment programs. To appease those opposed to increasing amounts spent by the EU on aid, von der Leyen acknowledges that only by helping those countries most affected — and least able to respond to —the converging crises stemming from climate change and environmental decline will Europe’s borders remain secure.

If this scenario were a TV show, the audacity of the approach would shock opponents into acceptance and von der Leyen would usher in an era of true sustainability in Europe.

But let’s be honest, little to none of this will ever be passed, let alone considered. Instead, the prophetic vision of Harald Welzer in his book Climate Wars will probably come true—where the EU border walls are hardened and unspeakable atrocities are committed to protect the Union from the millions of refugees begging and fighting for a basic chance to survive, as circumstances worsen around the world. Europe will radicalize and more and more of the world will become autocratic, fighting hard to defend what they have from the converging crises of a changing climate — drought, storms, floods, and floods of people.

Then again, if more people turn off Borgen, and turn up at the European Parliament, perhaps a better future will be written.

Erik Assadourian is a sustainability researcher and writer who spent 17 years studying the state of the world with the Worldwatch Institute.