Wendell Berry as a 21st Century Apostle of Jeffersonian Democracy

Look & See: A Portrait of Wendell Berry is a poetic new documentary about an American eco-icon of our age. The Kentucky-born, 82-year-old Berry is a poet, essayist, novelist, academic, and farmer who has long been a force to be contended with on the environmental scene. Since 1958, Berry’s artistically expressed championing of conservationism has earned awards and fellowships from a wide range of entities, including government agencies, museums, foundations, publications, grassroots and professional organizations, and educational and religious institutions. 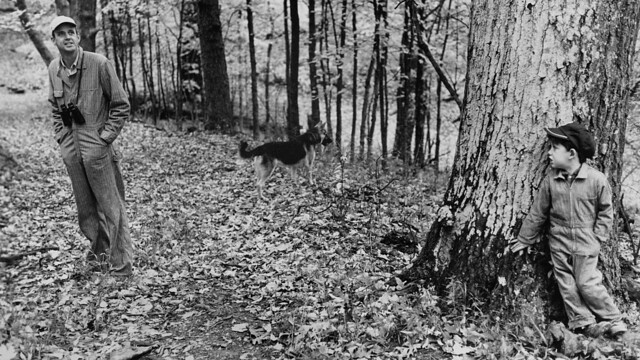 Photo courtesy of Look & SeeA young Wendell Berry with his son in the woods of Kentucky.

Directed by Laura Dunn and Jeff Sewell, and produced by Robert Redford and Terrence Malick, Look & See paints a motion picture portrait of its subject and the themes that have consumed Berry over his lifetime. The 82-minute nonfiction film uses realistic, as well as impressionistic, techniques, along with sometimes-elegiac music, to convey a sense of Berry and his philosophy. Wood engravings by Wesley W. Bates, an artist who has often provided pictorial accompaniment to Berry’s poetry, periodically appear onscreen.

The film opens with a montage of images of strip-mined mountains, machines chopping down trees, polluted rivers, and the endless hum of city life, set to a voice over reading of Berry’s poignant poem, “A Timbered Choir:”

“Even while I dreamed I prayed that what I saw was only fear and no foretelling,
for I saw the last known landscape destroyed for the sake
of the objective, the soil bludgeoned, the rock blasted.
Those who had wanted to go home would never get there now…”

Like a book, the story on screen unfolds through numbered chapters entitled “Imagination in Place”, “The Unsettling of America” and so on, as a series of subjects, including Berry family members, friends, neighbors, and several farmers in Henry County, Kentucky are interviewed. Their stories highlight how the people of Henry County, like many rural communities across this country, are struggling to hold on to their sense of place as well as the agrarian virtues of sustainable land stewardship in the face of the ever-expanding march of industrial agriculture.

Though a passionate defender of the simple, agrarian life, Berry is wary of how the camera frames (literally and metaphorically) people seen onscreen, and proves to be elusive in the film. There is no contemporaneous interview per se with Berry by the filmmakers, although he certainly permeates the film. He has a celluloid trail and is seen in archival and news footage and photos and he’s heard via voice over. (The film’s publicist informed this reviewer that “Wendell is now not making himself available for interviews.”)

Much of the documentary depicts Henry County, where Berry was born in 1934 and returned to in 1965, buying a farm in the land of his birth. Indeed, this Kentucky farmland becomes a recurring character in Look & See, just as on the urban flipside, say, New York is in Woody Allen’s 1979 Manhattan. Henry County provides the documentary with a sense of place, where Wendell’s philosophy is deeply rooted — and where, over the years, the seasonal rhythms of family farming and an agrarian way of life are being eroded and upended.

At the heart of Look & See, and what makes it important viewing for environmentally minded moviegoers, are Berry’s trenchant, urgent arguments against the industrialization of agriculture and in favor of family farms. Berry blurs the distinction between art and life as he critiques the consolidation of American farming in the pursuit of greater efficiency, productivity and profits, at the expense of the spiritual aspects of humans being planted in and connected to the land. In news footage Berry is seen debating President Richard Nixon’s Secretary of Agriculture, Earl Butz, an acolyte of maximizing profit through assembly line-type, increasingly technological methods of mass farming.

In his poetry and activism, which often intersect, Wendell advances a profound critique of corporate capitalism that ravages the tillers of the earth. The Kentuckian argues that industrialization and the mechanization of agriculture replaces traditional rural values with urbanism. In Look & See the poet/activist comes across as the champion of the common man and woman, advocating for a contemporary Jeffersonian democracy, with the family farmer at the heart of liberty. As Kimberly K. Smith’s chapter in Wendell Berry, Life and Work (the University Press of Kentucky, 2007) notes:

“Wendell Berry’s political values resemble in many respects Thomas Jefferson’s. Both men envision their ideal America as an agrarian republic: a community of honest laborers pursuing a modest life of virtue, seeking peace, commerce and honest friendship… Political power in this republic is decentralized, economic policies favor farmers and small-scale enterprises over large corporations, and freedom is guaranteed by a watchful and active citizenry.”

Of course, Berry’s version of Jeffersonian democracy is without the slavery that blighted the Sage of Monticello’s era, for, as Smith points out, “Berry’s vision is shaped by the intellectual currents informing the 20th century environmental, sustainable agriculture, and peace movements.”

On the other hand, industrial agriculture, “makes slaves out of a lot of people” who also suffer from “the forcible displacement of millions,” as the film puts it. Alienated, farmers suffer from a loss of contact with the land, as well as from pollution. Look & See opposes Big Ag’s use of chemicals as toxic and advocates for organic farming.

Look & See opened my eyes — I never knew farming could be so philosophical and poetic, which is lyrically evoked by Dunn and Sewell, as Pare Lorentz did in the New Deal era rural classics The Plow that Broke the Plains and The River. In addition to paying homage to Berry they have also created a modern ode to farmers. In numerous interviews with the ordinary men and women who till the soil in Henry County, they come across like the salt of the earth.

Dunn and Sewell’s documentary has been on the filmfest circuit, screening at Sundance and the​ EARTHxFilm Earth Day-related festival in Dallas in April. The film has won well-deserved awards at the Environmental Film Festival in the Nation’s Capital, SXSW Film Festival, and Nashville Film Festival.