Weathering the Storms Together: Grassroots Women’s Response to Climate Change

When we invest in women, we invest in food and economic security, community health and protection of land and our precious natural resources.
Kahea Pacheco and Melinda Kramer

In an event hall in the small village of Sirsi, on the edge of the Western Ghats in the Indian state of Karnataka, more than a hundred women gather to participate in the Malnad Mela, a decade-old festival organized by Vanastree, a seed saving collective of women farmers. These participants, as well as the 800 or more community members who visit throughout the day, have traveled long distances to be there despite a week of heavy monsoon rains and winds, uprooted trees, and power outages. 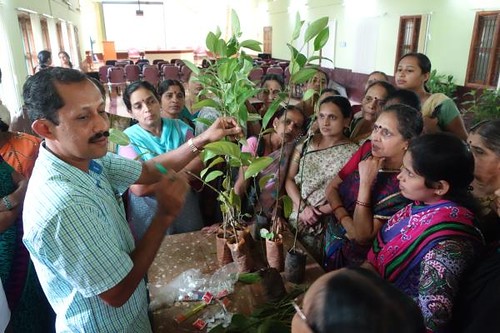 Photo courtsey of Womens Earth AllianceThe Malnad Mela is an opportunity for these women to share traditional ecological knowledge. For the very same reasons that women are intimately connected to the challenges that climate change brings, they are also uniquely positioned to identify the most effective solutions.

Sunita Rao— seed saver, farmer and founder of Vanastree — believes that the mela is a critical opportunity to bring women home gardeners and farmers together to exchange skills, share and sell produce, and discuss solutions and adaptations to the growing threat climate change presents to the region. The Malnad region of the Western Ghats is an area rich in biodiversity that has sustained their communities for centuries. However, the changing climate has rendered the monsoons — one of the area’s most essential ecological events — both unreliable and unpredictable. Rainfall patterns have drastically changed. Deforestation has increased. Soil degradation has worsened. And women farmers are bearing much of the resulting burden.

The Malnad Mela is an opportunity for these women to share traditional ecological knowledge about saving flood-resistant indigenous seeds, promote tuber cultivation as a solution to climate-induced food insecurity, engage a larger market to sell produce, and take part in leadership skills-building with other local women leaders. Each of these goals is a strategic action Sunita Rao, Vanastree, and the women of the Malnad take to face the persistent and dangerous effects of climate change.

“Climate change is about people. People cause climate change. People are affected by it. People need to adapt to it. And only people have the power to stop it. Not all people or countries, however, are created equal when it comes to the greenhouse-gas emissions that are warming our atmosphere.” – State of the World Population 2009, UN Population Fund

According to a 2009 United Nations report, in dealing with the impacts of climate change, “Women — particularly those in poor countries — will be affected differently than men.” Indeed, when floods, droughts, famines, disease and other crises result from climate change, women often face the worst consequences. Women comprise 20 million of the 26 million people estimated to have been displaced by climate change. Poverty and discrimination render women 14 times more likely than men to die in a climate-related disaster. And pressure to access scarce resources is correlated with increases in rape, domestic abuse, and other forms of violence against women.

Women farmers like those in the Vanastree collective currently account for 45-80 percent of all food production in developing countries, depending on the region. About two-thirds of the female labor force in developing countries, and more than 90 percent in many African countries, are engaged in agricultural work. This means that when crops are scarce due to drought, or submerged due to floods, women bear the burden of lost income and food shortages.

And on average, 63 percent of rural households depend on women to obtain drinking water for the home. According to the UN, women in Sub-Saharan Africa spend an average of about 40 billion hours a year collecting water. As our planet warms and climate instability increases, safe water sources will decrease, available water may become increasingly contaminated, and the time and distance women and girls must dedicate to collecting clean water will grow. To women, this means more threats to their health and safety, more sick family members to tend to, less time spent in school, and fewer opportunities to generate income.

Although women are disproportionately impacted by climate change and therefore more vulnerable, this isn’t the whole story. A report by the United Nations Population Fund and Women’s Environmental & Development Organization noted that, “women’s vulnerability can obscure the fact that they are an untapped resource in efforts to cope with climate change and reduce the emissions that cause it. As innovators, organizers, leaders, educators and caregivers, women are uniquely positioned to help curb the harmful consequences of a changing climate.”

The logic is both simple and profound. For the very same reasons that women are intimately connected to the challenges that climate change brings, they are also uniquely positioned to identify the most effective solutions.
Over the past 10 years of working with our grassroots colleagues in South Asia, Sub-Saharan Africa, and the Americas, Women’s Earth Alliance (an Earth Island project) has observed the importance of investing in regional strategies for self-reliant, resilient communities. Our grassroots colleagues are stewards of their water resources and are providing safe, clean drinking water to their communities. Women farmers are reclaiming their rights as farmers: overcoming hunger by farming organically, saving their indigenous seeds and restoring the health of their soil. And Indigenous women leaders are organizing to protect their traditional homelands from industrial and commercial development. Our colleagues are telling different versions of the same story: grassroots leadership can guide the world community in reshaping systems and reforming practices towards restoring balance on our planet.

Tomorrow, September 29, is Global Women’s Climate Justice Day of Action. As nations prepare for the UN COP21 climate negotiations in Paris, women across the world will tell their stories, demonstrate their solutions, and demand that our world leaders take meaningful action on climate change. As the late Dr. Wangari Maathai said, “...not only are women bearing the brunt of environmental and development setbacks — they are also a powerful source of hope in tackling climate and other environmental threats, and their voices must be heard.”
On this day of action, we have a chance to remind our global community that when we invest in women, we invest in food and economic security, community health and protection of land and our precious natural resources. Join us as we deepen the conversation: how can we powerfully stand with the leadership of grassroots women leaders who are on the forefront of struggle and transformation? Because when grassroots leaders can share best practices, access resources, and take collective action, they build a foundation that communities can stand on to weather storms together.