We Don’t Die, We Multiply

The spirit of Berta Cáceres was strong at the 2016 Goldman Environmental Prize celebrations in San Francisco last night. The evening’s ceremony opened with a spoken tribute to the indigenous Lenca activist who was assassinated in her home last month — less than a year after she walked up to the stage at the San Francisco Opera House to receive a Goldman for her sustained fight against big dams and other mega-development projects in Honduras.

“Giving our lives in various ways for the protection of the rivers is giving our lives for the wellbeing of humanity and this planet,” Cáceres had said during her acceptance speech that evening, as she urged us to wake up and take action to save our beleaguered world.

Had Cáceres been with us last evening, she would have been heartened to see that there are many courageous, inspiring grassroots activists across the world who are indeed awake and alert to the perils facing our planet, who continue to risk their lives to protect the land and communities they hold dear.

She would have met 39-year-old Leng Ouch of Cambodia, who’s spent two decades protecting rainforests in one of the most dangerous countries in the world for environmental activists. For years, Leng undertook dangerous undercover investigations to document illegal logging operations. (According to the United Nations, between 1990 and 2010, Cambodia’s forest cover dropped from 73 percent to 50 percent largely as a result of illegal logging.)

Leng exposed the deep ties between some of Cambodia’s biggest timber barons and the nation’s political class, and the rampant land grabs by Chinese and western companies that have robbed poor, rural communities of their land. His investigations have forced the Cambodian government to cancel large land concessions it had bestowed on logging and industrial farming companies, but at the same time have put him and his family at immense personal risk.

Environmental and human rights activists are routinely harassed and threatened in Cambodia. Leng’s colleague, Chut Wutty, an internationally known anti-logging activist, was murdered in 2012; weeks after his murder, the body of journalist Hang Sorei Oudom, who reported frequently on illegal logging activities, was found in the trunk of his own car; and just last month, another of Leng’s colleagues, Phon Sopheak, was attacked by axe-wielding assailants as she slept while out on a forest patrol. 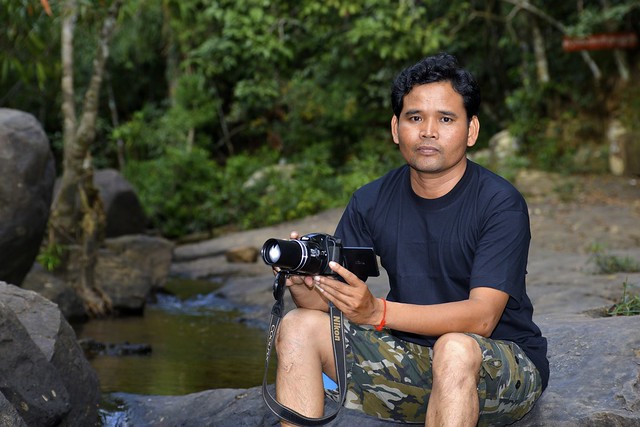 Photo courtesy of Goldman Environmental PrizeLeng Ouch went undercover to document illegal logging in Cambodia. He now lives in hiding since his life is under threat.

For the past few months, Leng has been living in hiding in safe houses. “I know that I cannot live longer… my life is on the blacklist of the government, even then I will continue my work to be a good model for young people,” he told me during a private interview last week.

In Maxima Acuña de Chaupe, a subsistence farmer in Peru’s northern highlands, Cáceres would have met another kindred spirit. Acuña has been fighting to live peacefully on her own land — a 60-acre parcel sought since 2011 by private companies for the biggest gold and copper mining project in South America.

Proposed by US mining giant Newmont and the Peruvian company, Buenaventura, the Conga Mine project is to be located just 10 miles from Yanacocha Mine, currently one of the largest open-pit gold and copper mines in the world. It calls for draining four lakes in the northern Peruvian highlands of Cajamarca. One of these, known as Laguna Azul, would be turned into a waste storage pit, threatening the headwaters of five watersheds and Cajamarca’s páramo ecosystem, a high-altitude biologically diverse wetland.

Acuña’s land provides direct access to the proposed project site and her refusal to let go of her property has led to systematic persecution over the years. Armed forces have raided her property, destroyed her home and possessions, and on one occasion, beat her and one of her daughters unconscious. The companies also sued her family, bizarrely accusing them of illegally squatting on their own land. Even more bizarrely, a provincial court found the family guilty, sentencing Acuña to a suspended prison term of almost three years and fining her nearly $2,000. 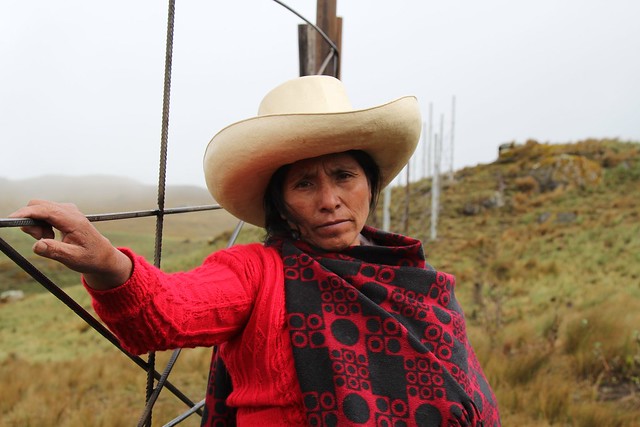 Photo courtesy of Goldman Environmental PrizeThe mining company has built a fence around Acuña’s land, restiricting her ability to move about freely.

With legal help from GRUFIDES, an environmental NGO in Cajamarca that was representing local community members in cases against mining companies, Acuña managed to get her ruling overturned in December 2014 and as a result of this legal victory, the Conga mine project has been stalled. Acuña has become widely known in Peru for her courageous stand, especially among the people of Cajamarca who have rallied behind her to defend their high-altitude wetland ecosystem.

But if anything, this victory has made the situation worse for Acuña, who continues to be harassed by the mining company and its militarized security contractors. The mining company has built a fence around Acuña’s land, restricting her ability to move about freely. They routinely destroy her potato crops, steal her sheep, and prevent her from planting her field. Meanwhile, the legal fight continues to play out in the Peruvian Supreme Court, with more appeals and lawsuits a near certainty.

Last night, Acuña sang poignantly about her struggle against power, bringing tears to many eyes:

“I defend the land and water because it’s life,” she said. “I’m not afraid of corporate power. I will continue the struggle.”

And oh, Cáceres would have been proud of Destiny Watford, all of 20 years old and already victorious in her effort to prevent a massive trash incinerator from setting up shop in her west Baltimore community of Curtis Bay — an area that’s known to have the worst toxic air pollution in the state. 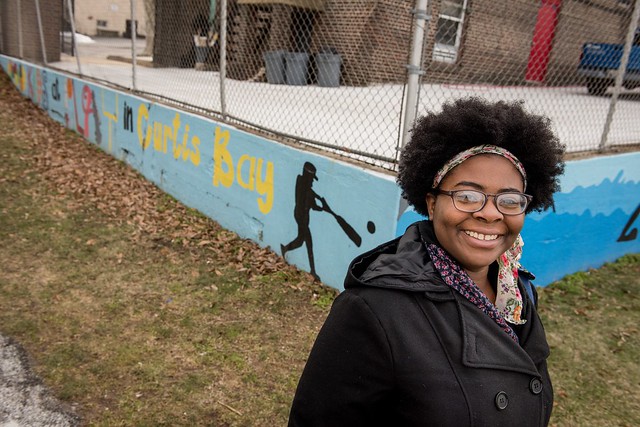 Photo courtesy of Goldman Environmental PrizeDestiny Watford helped Curtis Bay residents realize that their voices could be heard and their health and lives mattered.

From the age of 16, Watford has been working tirelessly, using social media and performing arts, to mobilize her disaffected community to fight against the plant that was touted by developer Energy Answers as a renewable energy source as clean as solar and wind.

With the help of her schoolmates, Watford put pressure on 22 local organizations — including the Baltimore City Public School system — that had pledged to purchase energy generated by the as-yet-unbuilt incinerator that was to be located near her school. She convinced 18 of the 22 organizations to nullify their contracts, effectively cutting off the main source of revenue for the incinerator, and in March, the Maryland Department of Energy finally cancelled Energy Answer’s lease on the 97-acre site on grounds that it had violated its permit by not beginning construction.

For Watford, the transformative moment for her group was when she met a community elder who told her that the work that she and was doing was useless and that “Curtis Bay always was and always will be a dumping ground.”

“That moment was infuriating,” she told me when I met with her last Friday. “But it also revealed to the group that it’s not going to be enough to just inform people about the incinerator. If we are actually going to make change in our community, then we have to change hearts and minds.”

What a joy it is, to meet a young leader with wisdom beyond her years. 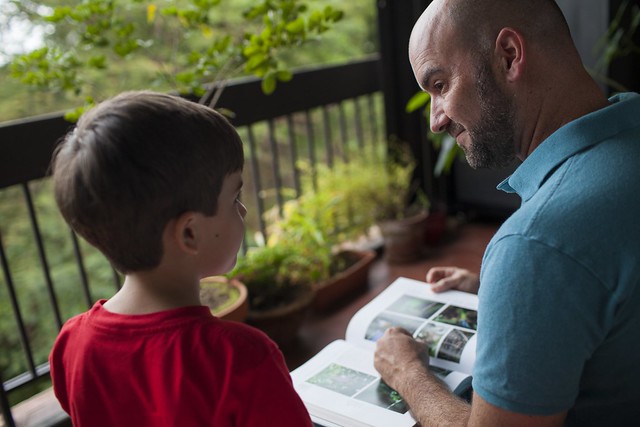 And how could Cáceres not have been impressed by Luis Jorge Rivera Herrera, who helped lead a 17 year long campaign to establish a nature reserve in Puerto Rico’s Northeast Ecological Corridor — an important nesting ground for the endangered leatherback sea turtle? Herrera called out the US Congress for trying to undermine environmental regulations in Puerto Rico (which is an unincorporated US territory) by voting on a bill that would let proposed projects ignore environmental laws on the island in order to fast track their approval and supposedly improve the island’s economy. The US Congress was planning to vote on the bill “without any formal input from the people of Puerto Rico,” he said during his acceptance speech last evening. “And as all of you know, citizen participation and the protection of natural resources is a basic principle if we want to make the world, and America, great again,” Herrera said in a cheeky nod to Donald Trump’s electoral slogan that had the audience laughing.

And there was Zuzana Caputova, a Slovakian a mother and a lawyer who spearheaded a successful campaign to shut down a toxic waste dump in her community, setting a precedent for public participation in post-communist Slovakia, and Edward Loure, a Maasai leader who helped pioneer a community land ownership approach in northern Tanzania, ensuring the environmental stewardship of more than 200,000 acres of land for future generations. (Read Journal associate editor Zoe Loftus-Farren’s article about Caputova and Loure’s legal efforts.)

Indeed, we were overwhelmed last night by all the compelling stories of ordinary folks taking extraordinary actions to protect our shared planet. I left feeling inspired to do my bit, to lend my hand to the task in any which way possible. And I’m sure so did many of the hundreds of other members of the environmental community in the audience last night.

I have a feeling last night lit a spark in at least a few hearts that will birth yet another crop of brave, grassroots leaders. I have a feeling that the three indigenous women poets who gave the spoken word tribute to Cáceres last night, were right on target when they chanted: “Berta did not die, she multiplied.”