Imagine, if you will, sailing along the eastern Chesapeake, searching for your next port when a solitary wooden house appears before you. It is covered in cormorants with waves splashing into the windows. Odd, you think, what is that doing out here and who would live in a place like that? 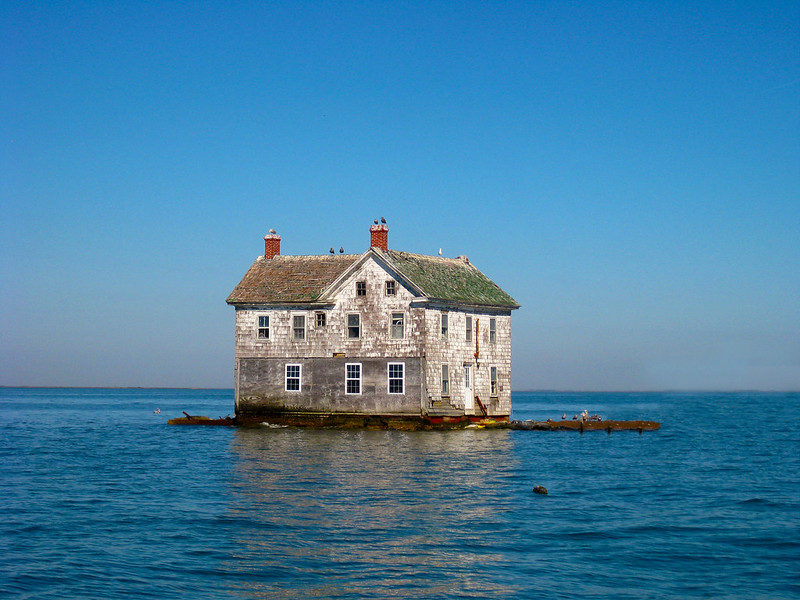 Photo by Forgemind ArchiMedia, Flickr A single house was all that remained of Holland Island in Chesapeake Bay. The house burned in 2010, and its remains are now submerged.

A quick check of the chart that day in the early aughts revealed nothing there but a tiny spit of land; no more than an oyster reef in the middle of the bay. We could only speculate about the purpose of the ghost structure — perhaps it was an abandoned lighthouse or a fish camp.

I was shocked to learn later that we had been looking at the last remnant of Holland Island, once a large community of farmers and fishermen who lived on the island until it eroded away to the point where it was abandoned in 1922. The buildings there had either been removed or washed away — with the exception of this last wraith.

The fact that the house remained was due to the heroic efforts of Stephen White, a retired Methodist minister who purchased the disintegrating island in 1995 and spent thousands on sunken barges and levees in a vain attempt to save the place he had loved as a boy. But his efforts only delayed the inevitable: In 2010 he capitulated by putting a match to the house and sailed away. Today all that remains of the town, the church, and the cemetery is a shallow spot on Google Earth.

The day we first sailed by that house the term “global climate change” was unknown to me. We carried on down the East Coast to our new home in Florida, and didn’t return to the bay until summer 2017 — again in a boat.

The Chesapeake has always been prone to what is now called nuisance flooding. Bi-weekly spring tides and nor’easters inundate docks, roads, and parking lots. Islands like Holland have been washing away for thousands of years. Thirteen have vanished from charts since English settlement in 1607. To an extent, it’s part of the character of the bay, something the people here have been able to accommodate.

But our return last summer showed us a bay that’s undergoing drastic and irreversible change; mostly from an ocean that is rising here much faster than the world average — about a foot in the last century — as well as subsidence of the land, erosion, and more intense storms. The future of entire communities is in jeopardy within our lifetimes.

The last two inhabited offshore islands, Smith and Tangier, are fighting for survival as saltwater regularly floods their streets and soaks their lawns — locals call them, “street tides.” On nearby Deal Island, which is connected to the mainland by a bridge, residents watch as their beach gets thinner with each passing storm and everywhere large stands of trees are dying as tides encroach their roots and create “ghost forests.” These towns reside in Somerset County, 58 percent of which has been placed in a FEMA-designated flood zone. Homeowners face large increases in flood insurance that many are ill equipped to pay.

Photo by Chesapeake Bay Program Tangier Island is one of the last two inhabited offshore islands in Chesapeake Bay. Residents, many of whom do not believe in human caused climate change, are fighting for survival as flooding becomes more and more common.

The economy of these unique places is based on crabbing and oystering, and the people trace their roots back to Cornish settlers from the 1700s. And despite the grim prospects for the future, they love their home and have no intention of leaving. “This is a family and we don’t want to leave each other,” says Tangier resident Teresa Vermeal Tyler. Estimates of how much longer they have before the islands are completely flooded range from fifty-years to the next bad hurricane.

Much of the Eastern Shore is only a few feet above the high-tide line and the winds persistently claw away at the shorelines. Tangier has lost two-thirds of its land since 1850 and if drastic action is not taken soon the people there will become some of the first climate change refugees in the continental US. “It can be depressing up here when you see these places that used to be a thriving community,” said Tangier Mayor James Eskridge as he looked at the town from the helm of his deadrise workboat. “It’s all gone now.”

The Army Corps of Engineers has proposed an ambitious and costly plan to reduce the erosion of both islands with breakwaters and dunes made from re-claimed sand, but this would only buy them another 50-100 years. “What you really need is an effort to raise the remaining land,” states marine biologist Dave Schulte. “But you would have to do that in addition to the stonewall protection. Otherwise, you’ll get a fishbowl effect where you’ll have stone around the island, but any storm event is going to overtop them and flood the entire interior.”

The major cities of the region — Norfolk, Baltimore, Annapolis, Ocean City, and Washington — also face a future of regular neighborhood flooding and saltwater intrusion. They would surely be first in line for federal dollars ahead of smaller communities, having a greater “legitimate national interest,” the metric by which the necessity for Army Corp involvement is assessed.

Along with Maryland, Florida and Louisiana are among the states most vulnerable to sea-level rise. The University of Maryland’s Center for Environmental Science’s most recent report advises Maryland to plan for up to two-feet of sea-level rise by 2050, and 3.7 feet by the end of the century, emphasizing that the state will need to build adaptation into planning processes.

The Union of Concerned Scientists is more blunt in its assessment, stating that, “twelve … communities that meet our threshold for chronic inundation today are located along Maryland’s Eastern Shore, due to a combination of rising seas and sinking land.” These include Smith Island, Crisfield, and several towns to the east and north. The group advocates a shift to a strategy of “retreat and relocation” from chronically inundated areas, defined as usable lands which are flooded more than 26-times per year.

And a study by the Risky Business Project, a group that assesses and publicizes the economic risks associated with climate change in the US, concluded that $507 billion worth of coastal US property could be below mean sea level by the end of the century

The overwhelming consensus of the scientific community is that heavy use of fossil fuels is the primary cause of all this and that America needs to quickly curtail its dependence on those fossil fuels. The majority of people on Tangier and Smith, however, insist that land loss is due to simple erosion, and these communities are petitioning hard to obtain federal funds to protect their frangible shores and preserve their land.

But as my family sailed around the Chesapeake islands last summer, taking in the sights and sounds of this spectacular place, I couldn’t help but worry that for the people living here, time was quickly running out.