Warnings from the Arctic

Record-breaking temperatures in Alaska, the US's canary in the climate coal mine, provide glimpse of a warmer future
This article originally appeared in Oil Change International.
Andy Rowell

There is an ongoing scientific debate as to how much influence our changing climate had on the extreme cold snap or what some call “bomb cycle” in the Northeastern US.

As usual, there is an active discussion. Last week, World Weather Attribution claimed that the US has always epxerience cold snaps, but that “cold waves like this have decreased in intensity and frequency over the last century.” 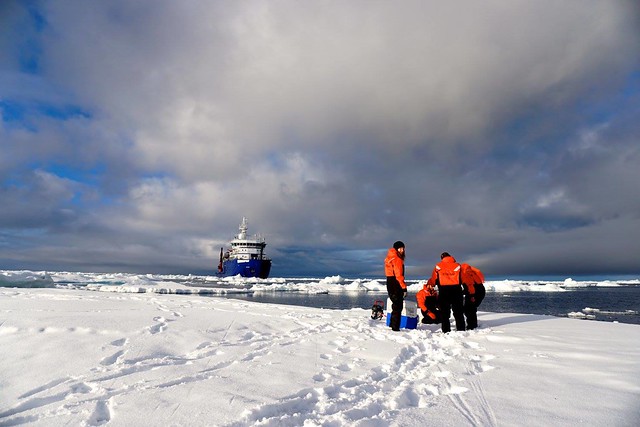 They add that their research shows “that the temperature of North American cold waves has increased substantially over the last century due to global warming.”

Other scientists disagree, though. Deepti Singh is a post-doctoral research fellow at the Lamont-Doherty Earth Observatory, who studies the link between climate and extreme weather. She says: “It’s normal in that it’s winter time and we can have snaps of cold weather. It’s abnormal because it has covered such a wide part of the US. And it’s also abnormal because it persisted for a couple of weeks.”

As the academics argue the specifics of the science of the relationship between extreme weather and climate, we know one thing: As New York shivered — Alaska sweltered.

Alaska has just experienced its hottest December ever recorded. The temperatures in Alaska were 15.7°F above the twentieth century average at 19.4°F according to the National Oceanic and Atmospheric Administration.

Rick Thoman, climate science and services manager for the National Weather Service said of the results to the Anchorage Daily News: “Alaska, of course, being the only Arctic part of the US … it’s often referred to as polar amplification, that climate is warming much more rapidly at high latitudes. We are the US’s canary in that coal mine.”

And the canary is issuing warning signals all the time. Before Xmas, I blogged about how scientists were talking about the “Old Arctic” — the one we once knew — and the “New Arctic” the one being fundamentally transformed by climate change.

The “Arctic shows no sign of returning to reliably frozen region of recent past decades,” starts the National Oceanic and Atmospheric Administration’s annual Arctic Annual Report Card reported in December.

When scientists were pulling the data together, the data from Barrow, Alaska — the northernmost city in the United States — was missing. This is because the temperature in the city had been warming so fast the data was automatically flagged by an algorithm which clocked it as wrong and removed it from the climate database.

Since then the situation has not improved. The Arctic was so warm in December that Arctic sea ice set a new end-of-year record low, according to the US National Snow and Ice Data Center.

One scientist, Jennifer Francis, a research professor at Rutgers University, argues that the Arctic is now warming at “least double the pace of the rest of the globe, meaning that the difference in temperature between the Arctic and areas farther south has been shrinking.”

Why this matters is that because “the north/south temperature difference is one of the main drivers of the jet stream. The jet stream creates the high- and low-pressure systems that dictate our blue skies and storminess while also steering them. Anything that affects the jet stream will also affect our weather.”

This month, the Alaskan Division for Public Health also warned that climate change, with increased melting of the ice and permafrost and with the concurrent impact on wildlife, fish, and game species, has the potential to create severe physical and mental health problems for Alaskans.

They even use the word, first coined by philosopher Glenn Albrecht “solastalgia,” which warns of distress from unwanted environmental changes close to a person’s home.

We could all soon be experiencing solastalgia. The Arctic is our climate canary. What happens in the Arctic will soon affect us all.