At 95, Sir David Attenborough has emerged as an eco-prophet crying out in the wilderness. The three-time Emmy Award-winner (including as “Outstanding Narrator” for Netflix’s 2019 Our Planet), who has been making nature productions since the 1950s, is like a modern-day, secular version of the Old Testament’s Isaiah, who predicted: “The desert will rejoice, and flowers will bloom in the wastelands… [and] sing and shout with joy… Streams of water will flow through the desert; the burning sand will become a lake, and dry land will be filled with springs.” Only Sir David’s prediction is not proselytizing about religious righteousness.

The film asserts that Earth has nine natural “boundaries” — including ocean acidification and climate change — a number of which have been crossed by human beings. Photo by Jim Maragos/U.S. Fish and Wildlife Service.

Attenborough is preaching the climate crisis gospel in a new original Netflix documentary, lending his prestige and mellifluous tones — eloquence and cadence undiminished by age — as the onscreen narrator for Breaking Boundaries: The Science of Our Planet, directed by Jon Clay. The title ties into what is meant when we say someone “has no boundaries” — that they are rude and disrespectful, such as by invading one’s personal space or behaving inappropriately. Projecting this concept onto a planetary basis, the film asserts that Earth has nine natural “boundaries,” a number of which have been crossed by human beings, threatening to trigger what Attenborough calls “irreversible tipping points,” or an environmental Armageddon.

Breaking Boundaries’ protagonist is Professor Johan Rockström, who is the founder of the Stockholm Resilience Centre, the Director of the Potsdam Institute for Climate Impact Research, and Professor in Earth System Science at the University of Potsdam, among other roles. Rockström appears throughout the documentary, along with an impressive array of other academics and experts from around the globe, who expound upon the transgressing of the nine natural boundaries that include: depletion of the ozone layer, ocean acidification, biosphere integrity, and but of course climate change.

The Swedish scientist explains the notion of the “Holoscene” — the geological epoch of the last 10,000 years or so when stable, reliable, predictable weather made it possible for human civilizations to emerge. However, Attenborough notes an unprecedented change: “In a single lifetime the Earth has warmed by 1 degree Celsius.” Human beings and their ever-expanding interaction with nature — from the burning of fossil fuels to the logging of forests — are responsible for this global warming trend, throwing the world out of kilter and moving it beyond the Holoscene Epoch into the Anthropocene, a proposed era defined by human impact on the Earth. Rockström argues that humans’ impact on the environment has, for the first time ever, placed the planet in peril.

Jason Box, a glaciology professor at the Geological Survey of Greenland and Denmark, a Copenhagen-based research institute, puts it into easy-to-understand pop culture terms: “It’s a Mad Max future we’re facing.” Stressing that “everything is connected,” Prof. Ricarda Winklemann of the Potsdam Institute for Climate Impact Research also uses a vivid analogy to explain the impending catastrophe caused by “crossing tipping points,” likening this to the “domino” effect.

Using animation and the stunning cinematography of global landscapes, flora, and fauna — from extreme close ups of insects in the rainforest to aerial long shots of a polar bear swimming towards floating ice ­— that is the hallmark of Attenborough’s natural history films, Breaking Boundaries makes a compelling case that we are facing an existential climate emergency. The image of that white bear at sea seems to sum up and be emblematic of the melting polar ice caps that are fueling the climate emergency this film is sounding the alarm about. 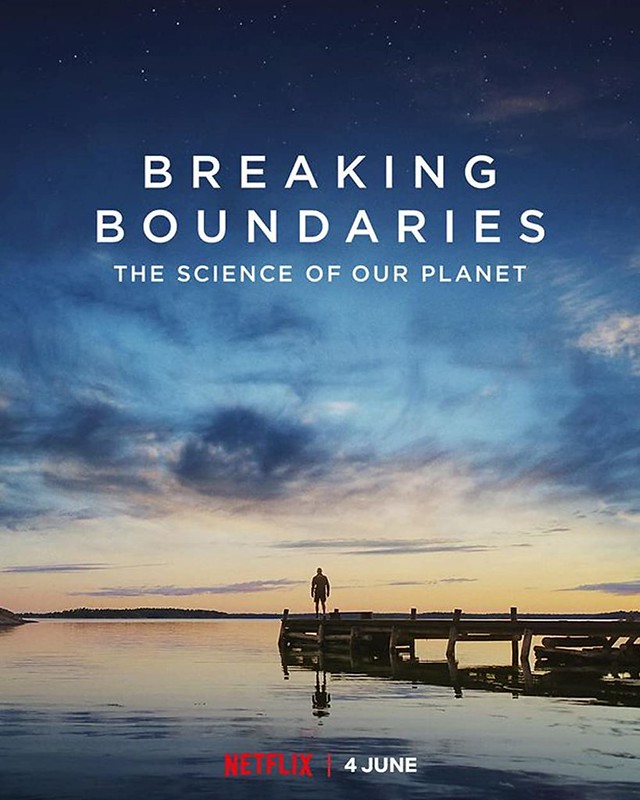 Breaking Boundaries demonstrates how our heating of the planet, caused in large part by our emissions of carbon dioxide, is adversely affecting biomes, biodiversity, fresh water, and nutrients. To illustrate this international chain reaction, the globetrotting filmmakers take us to the Amazon, where Brazilian scientist and meteorologist Carlos Nobre warns how, since the 1980s, clearing of forests has dramatically increased the dry season and that “the jungle may be replaced by savannization,” turning the tropical rainforest into a savannah, a mixed woodland-grassland ecosystem with widely spaced trees. Attenborough adds that due to deforestation, Earth has “already lost 20 percent of the Amazon.”

In Greenland, Prof. Box reports a “2 million cubic feet of ice per second loss,” adding we’re going from “a tipping point to a point of no return.” Box cautions that if Greenland’s icecap melts, sea levels could rise by 7 meters. Rockström returns to the Baltic Sea, where once he’d fished for abundant cod as a youth, but finds it’s “now the world’s most polluted sea,” devoid of cod.

Discussing coral bleaching at the Great Barrier Reef, Terry Hughes, professor of marine biology at James Cook University in Queensland, contends “half of the coral is dead, bleached to white. It’s a job I wish I never had to do,” the coral reef ecosystem researcher laments, as the former Director of the Australian Research Council Centre of Excellence for Coral Reef Studies breaks down on camera. The toll taken on those at the frontlines of the climate crisis is also visible when Dr. Daniella Teixeira, a wildlife conservation biologist, views the charred carnage wrought by bushfires that swept Australia’s Kangaroo Island, devastating habitat and killing literally millions of creatures. “This is an ecological tragedy, no doubt about it,” proclaims the weeping conservationist, whose specialty is monitoring the glossy black-cockatoo.

Driving the point home, Attenborough asserts: “Wildfires and coral bleaching are caused by our overstepping the climate boundaries,” as are glacial melt, sea level rise, and the other impending inter-connected disasters spreading around the world, not least of them the pandemic. But this documentary is more than a mere doomsday scenario. Rockström observes, “Covid-19 makes us understand something that goes wrong somewhere else in the planet can suddenly hit the world economy and change my life immediately.”

Having laid out the climate emergency fully, Breaking Boundaries turns to what can be done this decade, before it’s too late, to turn things around. “Now it’s a question of framing the entire growth model around sustainability and have the planet guiding everything we do… The window is still open so we don’t go to 2.0 degrees [Celsius of warming]. Now is the last chance we have to bend the global curve of emissions,” Rockström says, adding, “I don’t get depressed — I get angry.”

To underscore the professor’s fighting spirit, there is a clip of his fellow Swede, climate activist Greta Thunberg, the most admirable European adolescent since Joan of Arc, declaring: “I wanted to act as if the house was on fire — because it is.” Here, Breaking Boundaries proceeds to layout a recovery plan, that, among other things, would reduce emissions by 6 to 7 percent annually; grow more trees; drastically change the human diet and food supply; and more.

Breaking Boundaries is an insightful, excellent primer for introducing the dynamics and dangers of climate science to the uninitiated, although for more informed observers and activists much of this is familiar territory. The directorial debut of Jon Clay, who previously produced the 2020 nonfiction biopic David Attenborough: A Life on Our Planet, is also an engrossing film filled with optical opulence, scientific facts, philosophy, and commentators who bring complex climate issues to the screen in a thoughtful, captivating manner.

However, alternative forms of renewable, green energy are not emphasized and the documentary falls short in its analysis of climate change’s causes. While factors such as fossil fuel, deforestation, and Big Ag are indeed cited, Breaking Boundaries does not consider the economic and political systems that enable oil companies, loggers, and factory farms in their never-ending quest for profits. There’s a reason why the biggest Congressional supporters of the Green New Deal — Representative Alexandria Ocasio-Cortez and Senator Bernie Sanders — are socialists. As long as profits come before people and the planet, we’ll never have a sustainable economy that will be empowered to solve the climate crisis.

Hopefully David Attenborough and his ongoing films can help humanity and our troubled world escape the climate emergency threatening us all.

Produced by Silverback Films, Breaking Boundaries: The Science of Our Planet can be viewed at Netflix.