Today the US Navy plans to unleash 6,000 sailors, soldiers, airmen, Marines and Coast Guard members along with three Navy Destroyers, 200 aircrafts, untold weaponry, and a submarine to converge in war games in the Gulf of Alaska. The training exercises are scheduled to continue through June 26. 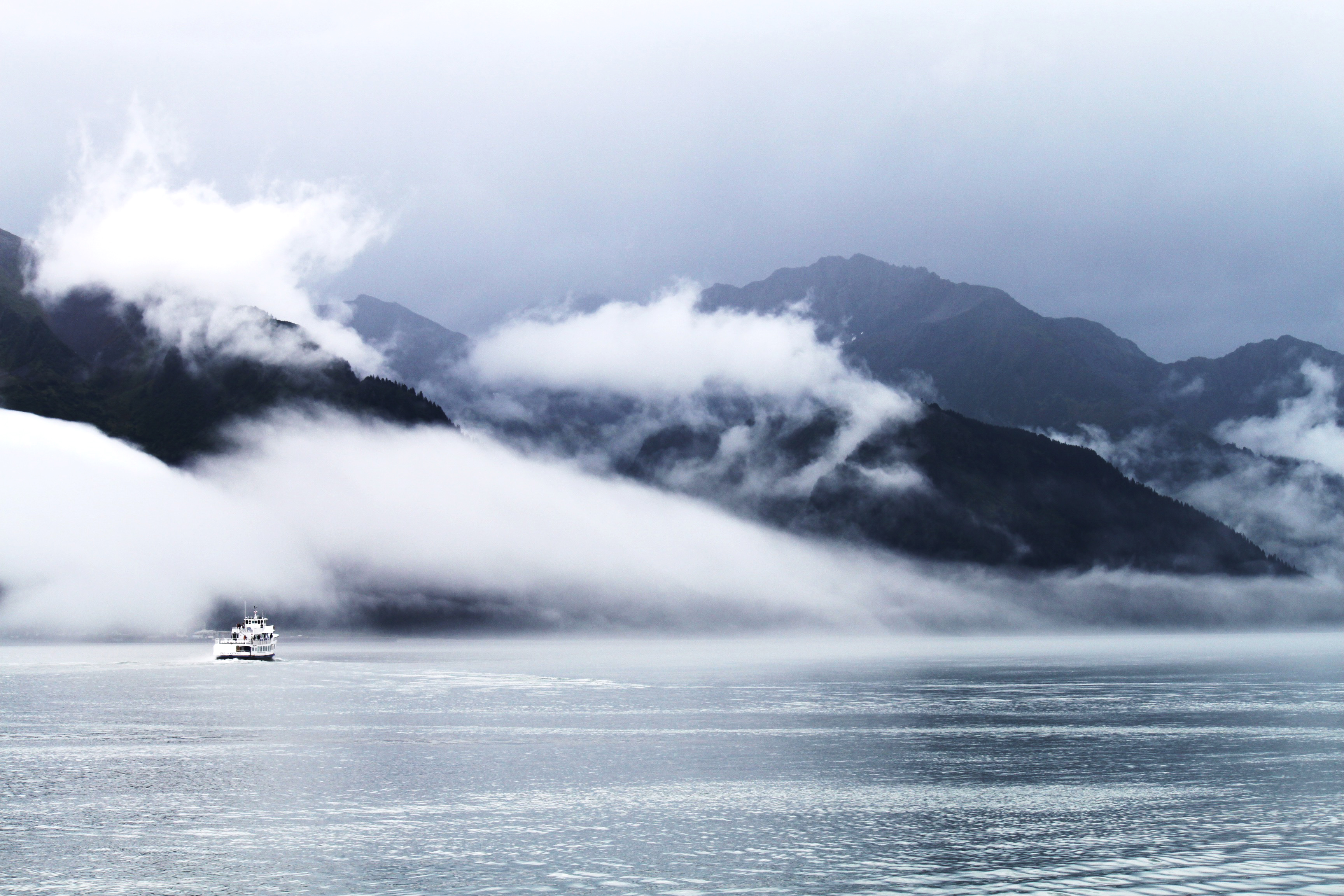 Photo by Sonia Luokkala The Navy is set to begin war games today in the pristine Gulf of Alaska.

The Navy’s choice of the Gulf of Alaska – one of the most pristine places left on Earth, and at the peak of migration and breeding periods of marine life – has left locals baffled and upset.

In the last month, protests have been held in Cordova, Kodiak, and Homer, Alaska. Emily Stolarcyk, a program manager with the Eyak Preservation Council, an environmental and social change organization based in Cordova, says local communities have never before united in such a way, pointing to the 100-plus fishing vessels that joined the protest against the Navy.

“It was incredible to see the commercial fleet turnout and unite like that with tons of support from people on shore as well,” she says.

Regional tribal villages have also been vocal in their opposition, worried that the Navy’s trainings could affect their subsistence foods. Several tribes have passed resolutions opposing the trainings and others are requesting formal government-to-government consultations regarding the plans. Local people are also concerned about the possible impacts on marine life.

According to Stolarcyk, the Navy has not been receptive to these concerns. “The Navy is refusing to negotiate at all with local communities,” she says.

The Navy has conducted Northern Edge training exercises in Alaska every two years since 1994. In 2011, the Navy expanded the scope of their training exercises and the use of the highly controversial low-frequency active sonar was authorized for the first time. The 2013 training was cancelled due to the federal government’s budget crisis. 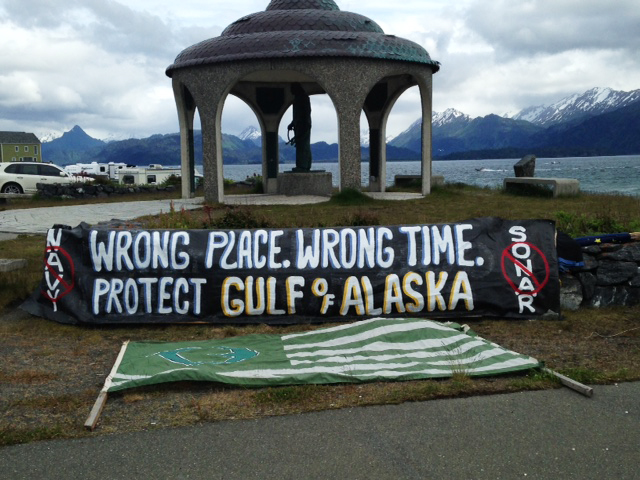 Photo by Shelley Gill Residents of Homer, Alaska have been vocal in their opposition to the Navy’s war games in the Gulf of Alaska.

The pristine waters of the Gulf of Alaska provide critical habitat for over 383 species of marine life. Its nutrient-rich waters call forth as many as 20 different species of whales every summer, including three different species of elusive beaked whales that are especially sensitive to the effects of the Navy’s active sonar.

Training exercises will be carried out simultaneously with the key breeding and migratory season for marine life in the area, including five species of Pacific Salmon that return from the ocean to lay their eggs in the rivers and streams of their origin.

Numerous whale species have arrived to the Gulf of Alaska to feed in its nutritious waters for the summer months: the Gray whale makes the longest journey by migrating up to 12,000 miles from Baja Peninsula in Mexico. The Gulf of Alaska is also designated critical habitat for the extremely rare North Pacific Right whale, with a population estimated at just 30 individuals.

In addition to potential impacts on wildlife, Alaskan coastal communities depend on the health of the sea. Commercial fishing is the largest private sector employer in Alaska, providing some 80,000 jobs. Sustainable fisheries are the lifeblood of many, and the Gulf of Alaska supports one of the most sought after wild salmon runs in the world.

The Navy is authorized to use bombs, missiles and torpedoes during the Northern Edge exercises. According to the Navy’s Environmental Impact Statement, their trainings could result in the release of benzene, toluene, xylene, hydrocarbons, naphthalene, cyanide and lead into the waters. Lead and hydrocarbons are endocrine disruptors, causing reproductive damage in aquatic life. Many of these chemicals also have a bioaccumulative effect. The Navy states that there is a high risk of chemical exposure to fish.

Also concerning is the use of active sonar, which is used to produce an underwater map by bouncing intense sound waves off of the ocean floor. The sound is extremely loud and distressing; at 235 decibels it is about a thousand times louder than the noise from a jet engine. It is believed the noise causes the whales to flee to the surface in attempt to get away from the noise. Disoriented, they surface too fast, and can die of the bends.

The sound also travels tens or even hundreds of miles underwater. The Navy estimates that the sonic waves can retain an intensity of 140 decibels, which is a hundred times more intense than the level known to alter the behavior of large whales, as far as 300 miles from the source. Whales and other marine mammals rely on their hearing for their most basic functions.

Evidence of the harm caused by the Navy’s use of active sonar surfaced in 2000, when individuals from four different beaked whale species stranded on beaches in the Bahamas following sonar use in the area. CT scans conducted on the dead whales showed evidence of acoustic trauma in their brains.

The Navy denied responsibility, but the government’s investigation established that their mid-frequency active sonar had caused the strandings. Similar mass strandings have been linked to the Navy’s use of sonar elsewhere. Many of the stranded whales have suffered physical trauma, including bleeding around the brain, ears, and other tissues, as well as the formation of large air bubbles in their organs.

A lawsuit filed by the National Resources Defense Council in 2005 contended that the Navy has conducted sonar exercises in violation of several environmental laws, including the National Environmental Policy Act, the Marine Mammal Protection Act, and the Endangered Species Act. In 2008, the Navy took the case to Supreme Court, which ruled in the Navy’s favor, saying that national security outweighed the whales’ legal protections.

Other potential risks of sonar use remain poorly understood. No scientific data exists on the impact of active sonar on migrating salmon. The only study published on the effects of low-frequency naval sonar focused on hearing loss of fish kept in fresh water tanks. The research was paid for by the Navy.

The National Marine Fisheries Service has acknowledged there are several environmental risks associated with the Northern Edge exercises. The NMFS issued four conservation recommendations for the Navy; one is to develop a fish mortality reporting plan. The Navy’s response has been inconsistent with the recommendation. Although the recommendations are non-binding, the Navy is also supposed to consider the public interest.

Lieutenant Julianne Holland says the Navy has conducted thorough environmental analysis of the activities being conducted as part of the upcoming trainings. “The Gulf of Alaska Final Environmental Impact Statement found that naval activities will have no impact to fish populations and no significant impacts to fish in migratory routes,” she says.

Longtime whale researcher and Homer resident Shelley Gill doesn’t trust that this is true.  “So the planes will circle until a sea otter swims away?” she asks.

Cordova and Kodiak have both passed resolutions to formally oppose the Navy’s exercises. Local communities are united against the Navy’s trainings and are asking them to postpone their operation until after September, and to relocate 200 nautical miles offshore so that they don’t interfere with the main migration periods and primary fishing seasons.

Today, a city council meeting held in in Homer with Navy representatives will give the people a chance to be heard one last time. Though the Navy has said making changes in the plan this late would be too expensive, Gill will be pressing the issue of how a delay of two months would make a tremendous difference in the risks for marine life and salmon fisheries.

“This has to work for our communities and the people that live here, and right now it doesn’t,” says Gill.

The Navy has declined all requests to allow third party observers aboard during the training in the Gulf of Alaska.