Investigations by the nonprofit International Marine Mammal Project (IMMP) have revealed that, in its Costa Rican locations, Walmart has been selling its own brand of canned tuna that has been caught using fishing methods that harass and kill dolphins. These practices make Walmart’s tuna brand — called Suli — dolphin-deadly, though Suli tuna cans carry a misleading seal claiming that the tuna is dolphin safe. 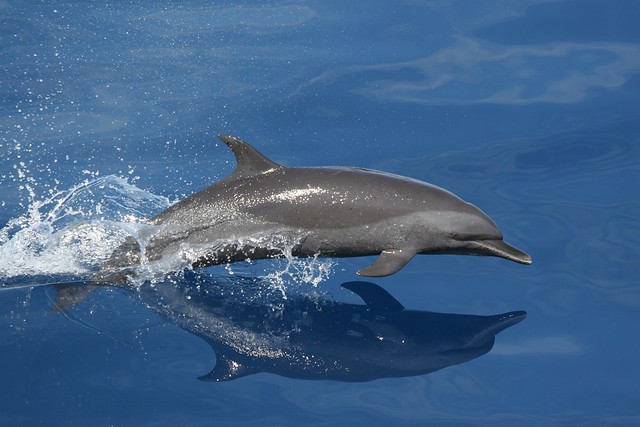 For reasons that remain unclear, in the Eastern Tropical Pacific Ocean, tuna and dolphins often swim and congregate together. (This is unique to the region: Tuna and dolphins don’t frequently congregate elsewhere.) Because dolphins are easier to spot from the surface of the water than tuna, tuna fishermen in the region often target dolphins, chasing entire pods into their enormous purse seine nets so that both tuna and dolphin are caught together. This practice is dolphin-deadly: Many dolphins drown or die of stress during the capture process, including young calves who become separated from their mothers during high-speed chases. In some cases, fishermen get into the water and wrangle the dolphins out of the nets, but these individuals are still traumatized, may be injured and bleeding, and are vulnerable to any predators that may be lingering about.

Mexican tuna fleets, owned by millionaire businessmen — with the strong support of their government, which has objected to the US Dolphin Safe tuna label since it was implemented — employ these dolphin-deadly methods of fishing in the Eastern Tropical Pacific. Walmart’s Suli brand of tuna, sold throughout Costa Rica, is sourced from the Mexican tuna industry.

“In 2014 alone, according to observers reporting to the Inter-American Tropical Tuna Commission, a minimum estimate of 975 dolphins were observed being killed by tuna fishermen by chasing and netting dolphins,” says David Phillips, director of IMMP, referring to number of dolphins counted on fishing boats in the Eastern Tropical Pacific on fleets owned by Mexico, Colombia, and Venezuela. “This figure is likely a drastic underestimation of the actual number of dolphins killed.”

In what appears to be a deliberate attempt to mislead consumers, on its Suli label, Walmart includes a blue dolphin seal with the words: “Tuna caught under dolphin protection standards” in Spanish. The cans also note that the tuna is a “Product of Mexico.”

The International Marine Mammal Project is alerting Costa Rican consumers that Suli-brand tuna is being sold not only in Walmart, but also in other Walmart-owned stores throughout the country, including Sam´s Club, Pali, Max X Menos, and Maxipali.

“Walmart is contradicting their own sustainability policy when they state that they offer environmentally responsible products. Selling tuna that comes at the expense of the needless death and harassment of dolphins is anything but responsible,” says Phillips. “Walmart executives need to listen to their consumers and stop selling dolphin-deadly tuna immediately.”

IMMP helped establish the standards for the Dolphin Safe tuna label in 1990, and now work with more than 750 companies representing more than 95 percent of the world’s tuna industry that enforce policies ensuring that all their tuna are caught in a dolphin safe manner with no chasing, netting, or killing of dolphins. There are plenty of sources of truly Dolphin Safe tuna that Walmart could offer, including fishing and processing companies in Costa Rica, Ecuador, and the US.