Land management policies are changing in northwest New Mexico, but not fast enough for some activists who are suing the federal Bureau of Land Management (BLM) over improper oil-lease permitting in the state for the third time in as many years.

After decades of watching BLM sanction relentless drilling that led to road expansion, fouled water, and methane leaks across Greater Chaco, activists are taking no chances. Photo by donzermeno/Flickr.

The relentless legal wrangling concerns 45,000 acres of high desert chaparral known as the Sisnaateel Mesa Complex in BLM’s Rio Puerco district. Sisnaateel is central to Navajo cosmology and represents some of the most pristine landscapes in the southern portion of Greater Chaco, an 8000-square-mile region surrounding Chaco Culture National Historical Park.

While the case awaits hearing, drilling and permitting continue.

Hopes were high just one year earlier, when President Biden announced an about-face from Trump-era drilling policies at a White House Tribal Nations Summit. On that day, November 15, 2021, Greater Chaco took center stage with the unveiling of the so-called Honoring Chaco Initiative. As part of that initiative, the BLM — long the nemesis of activists fighting to protect the region’s cultural and natural treasures — proposed a 20-year ban on oil and gas leasing on all federal lands within 10 miles of the park’s 53 square miles.

It was a radical shift for the agency, but it came with caveats. For starters, at the time the ban was announced, over 40,000 wells already carpeted northwest New Mexico’s San Juan Basin and 90 percent of the land was already leased to oil and gas companies. The Honoring Chaco Initiative would not cancel existing leases nor prevent drilling on non-federal lands, and it would take two years to clear public hearings and federal review.

After decades of watching BLM sanction relentless drilling that led to road expansion, fouled water, and methane leaks across Greater Chaco, activists were taking no chances. The same day that Honoring Chaco was announced, Sierra Club, Diné Citizens Against Ruining Our Environment, San Juan Citizens Alliance, and WildEarth Guardians filed their opening brief in a lawsuit against BLM over lease sale re-approvals and drilling permits issued in Sisnaateel during the Trump administration. It was the second time the groups went to court over permits allegedly issued without proper environmental review. The original suit challenging the underlying lease sales was filed in July 2020 and amended on January 2021, the first day of the Biden administration to include three additional lease sales.

This second suit was prompted, in part, by the discovery that the BLM had approved approximately 120 additional permits while the first case was still pending in court.

When a settlement in the case challenging the underlying leases was reached in April 2022, BLM promised reform. Four months later, however, it reapproved the leases with only minor changes to its environmental assessment. Which is why this past October, citing the absence of detailed review of cumulative greenhouse gas and community health impacts required under the National Environmental Policy Act (NEPA), plaintiffs sued the agency for a third time.

“We see this disconnect between the national — what the Interior Department espouses as its commitment to honoring Greater Chaco, climate change, and environmental justice — and then what is happening at the field office level,” says Ally Beasley, an attorney with Western Environmental Law Center, the plaintiffs chief counsel.

At the heart of the Sisnaateel debate is the resource management plan for BLM Rio Puerco District, which dates from 1986 and was last revised in 1992. Fracking, horizontal drilling, and climate change are not even mentioned in that plan because they were not banner issues back then.

In the century that has passed since gas was first discovered in northwest New Mexico, residents have seen a parade of oil companies come and go. During the most prosperous years, when Big Oil players like ConocoPhillips, BP, and ExxonMobil dominated, there was some semblance of corporate responsibility. But as oil and gas wells became less productive, equipment more obsolete, and the Permian Basin at the opposite corner of New Mexico more lucrative, Big Oil picked up and left for greener pastures.

By selling off their San Juan Basin assets, these companies improved their environmental profile and operating costs. Meanwhile, private equity firms that snatched up the aging infrastructure and declining wells at bargain rates, have maintained profitability by slashing costs and brushing aside environmental concerns. New Mexico’s Oil Conservation Division recently fined Hilcorp, the region’s most dominant private equity firm, $1 million for permanently turning off a pump system designed to remove toxins from a well site. 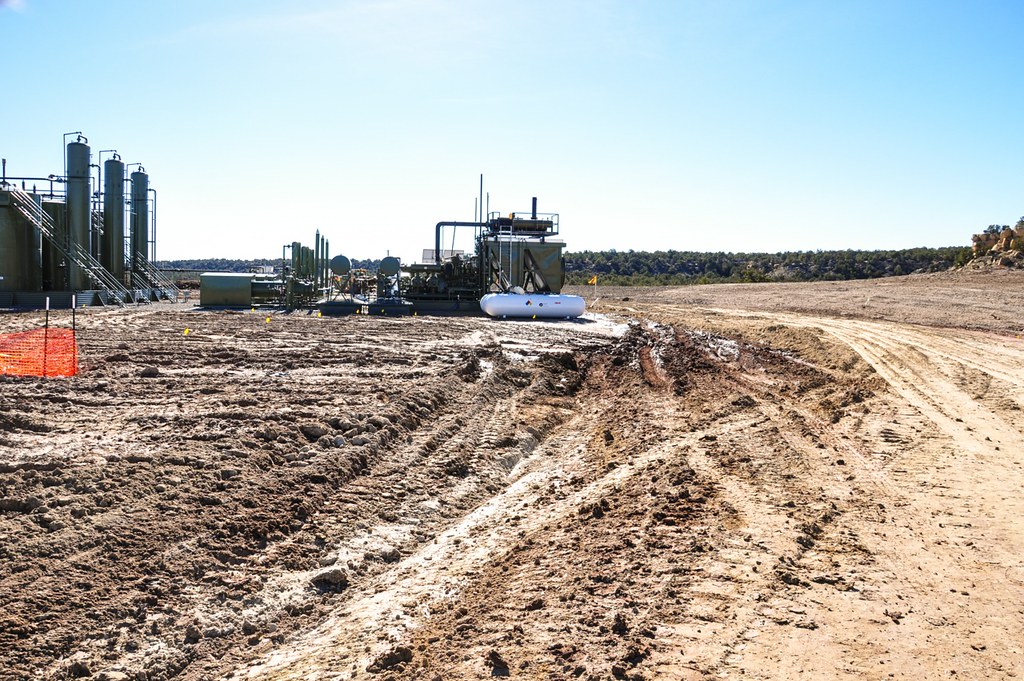 Extensive soil clearing for oil drilling has been devastating the landscape of Greater Chaco. Photo courtesy of WildEarth Guardians.

The company at the center of the Sisnaateel oil leases — EOG Resources (formerly Enron Oil and Gas Company) — originally acquired drilling rights from BLM in December 2018 across over 40 parcels averaging 1,000 acres each and swiftly launched road expansion and began drilling.

Environmental and Native American groups were quick to file a protest to the lease sale, followed by lawsuits in 2020, 2021, and now this past October. Recently, EOG mysteriously withdrew 95 of the original 120 permits, but the company still has the right to develop on the remaining leases.

“This is a sacred and really beautiful area,” says Mike Eisenfeld, energy and climate program manager of San Juan Citizen Alliance. “This [Sisnaateel] would be a whole new zone of drilling. With all they’ve done around Chaco and the mess from everything they’ve leased, they need to leave places like this alone. What about the Honoring Chaco Initiative? That’s not honoring anything.”

When fracking injected new life into the San Juan Basin’s moribund wells a decade ago, oil and gas companies came storming back across the region with a vengeance. The lands north and east of Chaco Culture National Historical Park, a UNESCO World Heritage site, were particularly hard hit.

In mid-2020, concurrent with the Rio Puerco case, BLM’s Farmington district attempted to push through a separate resource management plan in the more northerly reaches of Greater Chaco at the height of the Covid pandemic. By holding virtual hearings that few could attend due to poor wireless access across the Navajo Nation, BLM met minimum requirements for public review despite tribal stay-at-home orders. The amended plan was never approved, but — as in BLM’s Rio Puerco district — drilling and permitting have continued.

Secretary of the Interior Deb Haaland — herself a Pueblo Laguna whose people descend from the ancient Chacoans — is intent on reforming the BLM, an agency under her jurisdiction, but it is a challenge.

“We’re trying to be supportive,” says Mario Atencio, a board member of the Navajo environmental group, Diné CARE. “She [Haaland] can reverse a lot of bad decisions, but that takes time. As much as we don’t like it, you have to work the system.”

Unfortunately, it is a system that requires expensive legal firepower and staying power, and activists say, it puts environmental and Native American groups at a disadvantage.

“We understand we’re in the middle of huge shifting seas and we just need to keep our eyes set on protecting community,” says Atencio. “We’re up against the American Petroleum Institute. You scratch that guy, you know, and they come at you with heavy guns.”

Despite the odds, market forces may ultimately tip the balance in the activists’ favor. The San Juan Basin is running out of gas while the Permian Basin in southeast New Mexico boasts a full tank. According to Eisenfeld, the San Juan Basin, once a beehive of over 1,000 Applications to Drill per year, has dwindled to a mere 60 or so annually.

Farmington, the hub of the region’s oil and gas industry, will soon rely on renewables for much of its electricity. Its recently decommissioned 900MW San Juan Generating Station, rather than shifting from coal to natural gas, is slated to be replaced with 650 MW of solar energy. Native-owned solar farms are popping up across Greater Chaco as well. Yet, while solar is gaining traction in the region, companies like Hilcorp and EOG remain intent on drilling. For now, Honoring Chaco sits on hold.

Randall Hyman covers environmental and science topics worldwide. His recent work in the Arctic led to a photographic and oral history project on the Indigenous Sámi people of northern Scandinavia whose struggle for environmental justice echoes issues facing Native Americans.