Nature is not healing. The ice is melting. Homes are flooding. The native animals of the land are perishing at an unstoppable rate. Loved ones, unable to cope with their strife, vanish back into the Earth that made them and leave behind troubled souls that can only miss them and question why. Comfort comes from the stars in the sky and the stories they tell, but only because human greed and corruption hasn’t been able to find a way to exploit them, yet.

Canadian writer Tasnuva Hayden’s debut verse-novel looks to the stars to explore personal tragedy and the harrowing effects of climate change. A reflection nebula in the constellation Orion, via NASA/ESA Hubble Space Telescope.

This is the stark reality of Sophie, the narrator of An Orchid Astronomy, a powerful debut verse-novel by Canadian writer Tasnuva Hayden. Sophie lives in Veslefjord, in the frozen Norwegian North, where she contends with a personal tragedy and the harrowing effects of climate change. Norway’s natural beauty, its snow, ice, and creatures, who serve as national symbols of pride, is being corroded along with Sophie’s sense of peace.

“Can scholars negotiate with reindeer?” she challenges readers to consider; humanity may be past the point of talking its way out of the damage it has done. Sophie narrates the story of a single, vulnerable person recovering from a family death —“That mamma would choose suffocation. Buried alive under unyielding winter storms”— who is forced to face alarming events — “millions of tons of crude spilled into the ocean, day after day.” 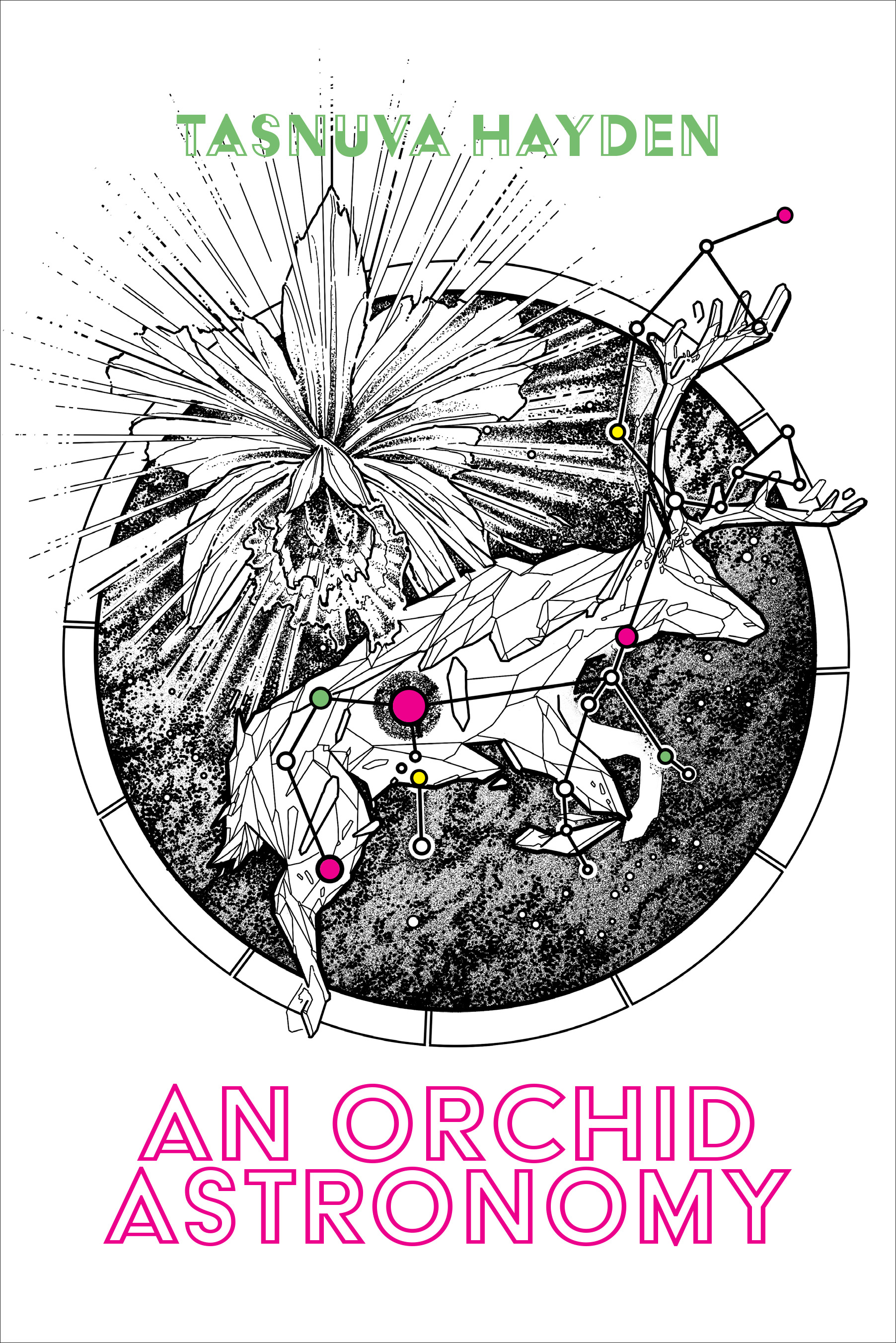 An Orchid Astronomy is not just a commentary on environmental impairment, but a study of trauma. Sophie is unable to separate her two sorrows: the death of her mother by suicide and the slow death of her home. As she contemplates the disheartening state of the world in her own time, Sophie describes her late mother, who as an environmentalist also experienced climate crisis angst: “Her eyes bruised by grief—the colour of an oil spill. ‘Yes, we’re unfortunate, aren’t we? Dealing in such currency?’”

Even while grappling with such tremendous losses, Sophie is grounded in intellectualism. Rather than sink into emotional turmoil, she rationally evaluates her situation with allusions to ecology, mythology, philosophy, science, mathematics, history, and astronomy. Sophie tries earnestly, desperately, to connect the dots. She wants to create a new, individualized astronomy, one that explains everything, especially that which is out of her control.

Each chapter is named after an alignment of stars. Sophie has organized her thoughts like an astronomer: “All of that, which could lead to the unravelling of a carefully constructed life, measured by the rotation of gears and planetary bodies.”

Some readers may find the book daunting. The verse is detailed with Hayden’s encyclopedic knowledge of the sciences and the arts, which she uses to significant effect, but which can also be confusing. Readers may be obliged to occasionally look something up, though this is a fitting way to absorb the book.

Sophie’s story forces readers to learn new things and reflect on the world as an increasingly unstable entity. She also entreats readers to contemplate loss, an inevitable and inescapable condition which everyone will face: “As da Vinci’s successor, Hooke went on to make flight a matter of public inquiry. ‘If you look in the rearview, I’ve already left you.’ To the point of obsession. Sarvvis opens his mouth.”

Sophie as a narrator tends to drift, into memories, into ideas, and into the world she knows best, a world of literature. Neither is the story’s timeline linear; it zig-zags erratically. But there is joy, too, in the lush language, which makes up for the moments of disorientation a reader may experience.

Hayden’s work is poetic, abstract, and penetrating. Anyone who reads An Orchid Astronomy can afterwards look to the stars and see a new universe.

Emily R. Zarevich is a writer based in Burlington, Ontario, Canada.