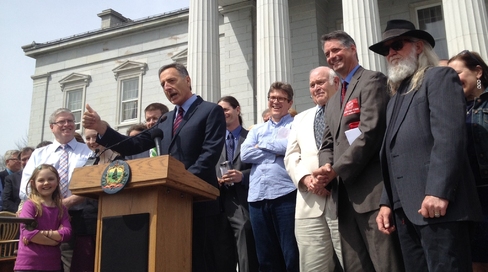 What this means is that the law will go into effect regardless of actions on the matter by other states. Food producers and manufacturers in Vermont will have to label products containing genetically modified organisms by 2016.

Vermont isn’t the first state to pass a GE food-labeling bill. Two other states – Connecticut and Maine – have also passed similar legislations, but their laws come with conditional provisions. Connecticut’s law won’t go into effect until four other states with a combined population of 20 million people enact similar labeling laws. Maine’s law requires five other neighboring states to implement food labeling before it can take effect. The Vermont law doesn’t include any such trigger clauses.
Sustainable food activists hope that it will set the stage for more states to adopt similar, unrestricted labeling laws.

“This is a really historic day,” George Kimbrell, senior attorney at the Center for Food Safety, told me over the phone. “We think it portents that the dominos are beginning to fall now.” The center helped draft the legislation and has been a key player in the decade-long effort by food activists to have more regulation on GE food in the country.

The push to label GM food has certainly been growing in the past few years. Even though the high-profile ballot initiatives to label genetically engineered food in California (2012) and Washington (2013) didn’t make it through, more than 60 labeling bills were introduced in 23 state legislatures last year. Of these, 32 bills were reintroduced this year.

Coincidently, the Oregon Supreme Court also announced today that it has certified a ballot initiative on GMO labeling for the state elections in November. “Oregon is going to be the next key battlefield for state labeling,” Kimbrell said. “We are going to being the signature gathering process right away.”

Of course, when a GMO-labeling bill passes, a lawsuit isn’t far behind.

The Grocery Manufacturers Association has already called the Vermont law “critically flawed and bad for consumers.” When the Vermont legislature passed the bill last month the association said it was “in the process of evaluating the legislation to determine the best course of action in response to its passage.”

The state administration too, is gearing up for a legal challenge. In fact, the new Vermont law includes a provision for a $1.5 million legal defense fund that will be financed using money that the state is awarded from other legal settlements. “I’ll be very surprised if we are not sued if the legislature goes ahead and enacts a mandatory GMO labeling statute,” Vermont Attorney-General Bill Sorrell told Vermont Public Radio last month.

With passage of the Vermont law, the focus, for now, shifts to Washington, DC and the Genetically Engineered Food Right-to-Know Act that was introduced by Representative Peter DeFazio and Senator Barbara Boxer last year.