On the night of April 14, gunmen fired three shots into the home of Patricia Gregorio Carranza and Manuel Arriaga Garzo in southern Guatemala. The attack followed the January attempt on the life of community leader Julio González as well as renewed threats against attorney Quelvin Jiménez and others leading the fight for the rights of the Indigenous Xinka people. Luckily Carranza and Garzo escaped unhurt. It’s assumed they were targeted by mine supporters due to their participation as Xinka representatives in the court-ordered consultation over the future of Vancouver-based Pan American Silver’s disputed Escobal silver mine, which has been suspended since June 2017. 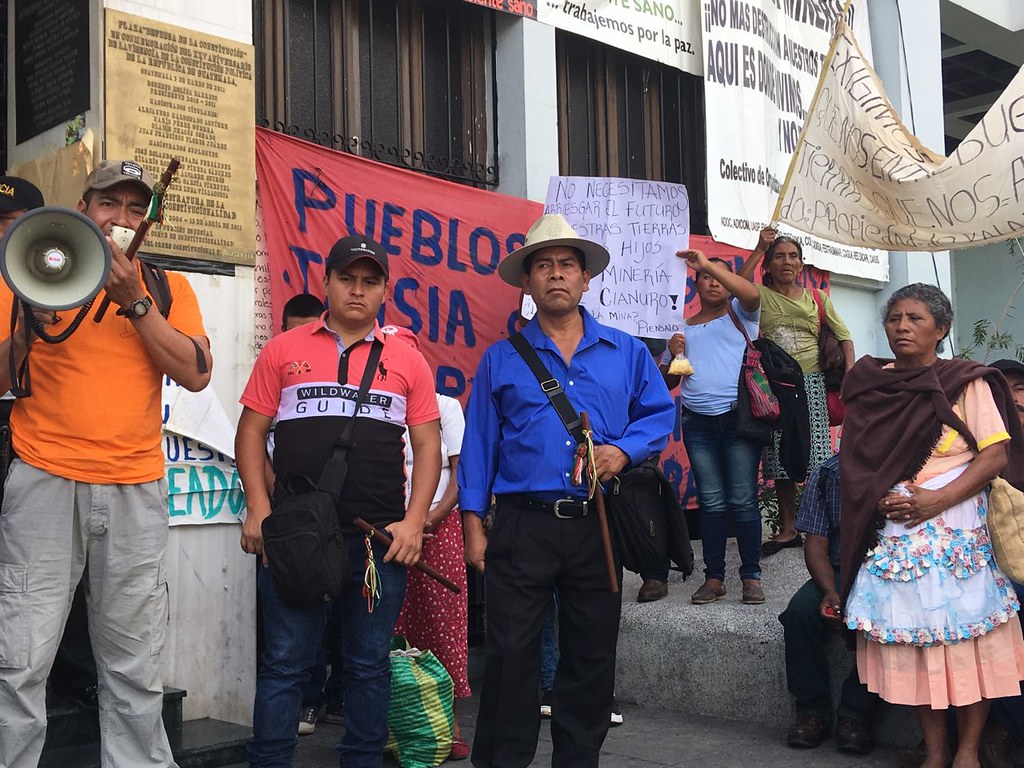 Local residents protest the Escobal siver mine outside the Constitutional Court of Guatemala in May 2018. Since the mine first started operating in 2011, the Xinka people have accused the mining company, then Tahoe Resources and now Pan American Silver, of fomenting tension and division in the community, contributing to the increase in violence. Photo by Jackie McVickar.

Tensions have been simmering ever since October 2020, when the Xinka Parliament, the governing body of the Xinka, reached a hard-fought agreement with Guatemala’s Ministry of Energy and Mines. This agreement secured their full participation in the consultation process through the accreditation of 59 community-elected representatives who come from different parts of Xinka territory spanning three departments surrounding the mine.

Since the Escobal mine first started operating in 2011, the Xinka people have accused the mining company, then Tahoe Resources and now Pan American Silver, of fomenting tension and division in the community, contributing to the increase in violence. Despite the court order suspending all operations, Pan American Silver continues to “engage with community leaders, government agencies and NGOs,” according to its 2019 Sustainability Report. In September 2020, the company announced the launch of a “participatory monitoring program” in the municipality where the mine is located. In the context of the consultation process, communities believe these types of ongoing activities undermine the free nature of the process and make an already tense situation worse.

In response, Pan American Silver calls itself a leader in environmental and social governance, but its track record suggests otherwise.

In addition to the Escobal mine, the company currently operates eight mines from Mexico to Argentina, and one in northern Ontario, where it extracts gold, silver, lead, and zinc. This doesn’t include mines that Pan American developed before offloading them to other companies.

To make way for these mines, communities have been displaced, the environment contaminated, and local demands for self-determination disregarded. When impacted communities have taken stands to protect their land, water, health, and livelihoods, they have often been met with violence and intimidation from private security or state forces. In some cases, Pan American has been in charge during these violent responses. In others, it is profiting from earlier repression. Activist shareholders raised questions about these critical issues at the company’s annual shareholder meeting on May 12. The company’s response? That the complaints were not “pertinent” to its business.

Shareholders asked if Pan American Silver would take responsibility for acid drainage and other tailings dam risks at the Quiruvilca mine in La Libertad, Peru. It offloaded the mine in 2012 after operating it for 17 years, saying it trusted the incoming company. But the new owners walked away too. Media outlets in Peru have since labeled the abandoned mine a “time bomb,” and five states of emergency have been declared due to the high levels of heavy metal contamination in the Moche River from acid mine drainage and instability of the mine’s tailings impoundments.

Shareholders also questioned Pan American Silver about the 2017 forced displacement of the community of La Colorada in Zacatecas, Mexico to make way for expansion of one of the company’s largest operating mines. After Pan American Silver and its government allies failed to persuade the community to move, private security guards evicted the residents to a “residential unit” next to the mine site and destroyed their homes. Now, the company owns the houses residents live in and exercises near complete control over daily life. On top of these suffocating conditions, the community members are concerned about potential impacts on their health, given their close proximity to the mine.

Questions have also been raised about the conflict that Pan American is fueling with Indigenous Mapuche Tehuelche people and other residents of the province of Chubut, Argentina, who have defended a province-wide mining ban with monthly marches for nearly 20 years. Pan American Silver has been pressuring local authorities to clear the path for their Navidad mine, and over the past several months, the Chubut legislature has made multiple attempts to repeal the mining ban. This has resulted in massive social upheaval. In May, peaceful protestors blocked the main highway in the region for over a week in defense of the mining ban and their right to say no.

There is an abysmal gap between the recurrent disregard for the self-determination, lives, and wellbeing of mining-affected peoples and the economic, legal, and political leverage of corporations like Pan American Silver. Mining companies invest freely where they are not wanted and walk away from irreparable harms when they please.

Governments in the United States and Canada have so far failed to ensure that companies domiciled or raising capital in these countries can be held accountable for injustices committed when they invest in other countries. Until they do, it remains vital to build solidarity and act in response to the frequent crises arising from the tensions, violence, and social upheaval that mining companies like Pan American Silver provoke.