The rubber boots are essential to our endeavor. Mud paints them brown as we squelch our way to the oyster purses; mesh tent-shaped baskets. My family stays on the purses’ edge — any deeper and we risk sinking to our knees — and we pick out our dinner.

The chosen oysters are medium-sized, less stubborn to shuck and best served on the half shell. As much as we prize our bivalves, they aren’t of this place. In fact, 98 percent of oysters farmed in Washington State last year were nonnative Pacific oysters. 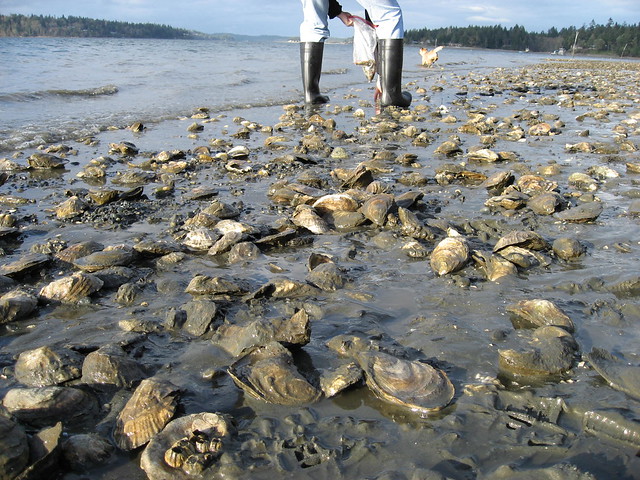 Photo by cswtwo/FlickrOnly 5 percent of the Olympia oyster’s historic beds remain in Washington State, mostly in protected coves and bays of the southern Puget Sound.

The state’s only native oyster — the Olympia oyster (Ostrea lurida/conchaphila), which is the only oyster native to the West Coast and once thrived along coastlines from Southeast Alaska to Baja, California — has stayed out of the shellfish farming limelight for years now. But new restoration efforts using nonnative Pacific oyster shells are making the little Olympia oyster mighty again.

Shorter than your thumb, equipped with an abnormally thin shell, Olympia oysters, called “Kloch Kloch” by Native Americans, are less hardy than their nonnative counterparts. They are happiest in the intertidal zone, submerged and insulated from extreme temperatures until low tide. A hundred years ago they covered up to 20,000 acres in Washington waters, but were driven to near depletion in the 1900s from overharvesting and pollution from paper mills that dumped their toxic effluents, including bleaching agents, into local waters. Today, only 5 percent of their historic beds remain, mostly in protected coves and bays of the southern Puget Sound.

The mainstay of Washington State’s oyster industry these days is the much larger Pacific oyster (Crassostrea gigas), first introduced from Japan in 1902 for commercial harvesting.

PSRF has been working since 2010 to restore 100 acres of native oyster habitat in Washington by 2020. To date, the organization has restored between 50 to 60 acres, but not for farming purposes, Peabody says. They are working with the Washington Department of Fish and Wildlife (WDFW) to act on Governor Jay Inslee’s 2011 National Shellfish Initiative, which focuses on 19 priority areas in the Puget Sound for restoration.

In areas with natural larval production where there isn’t enough habitat for oyster beds to develop, PSRF spreads Pacific oyster shells to provide a settlement structure that enables larvae to naturally recolonize. Young Olympia oysters, called spat, attach themselves to these shells and begin the slow process of growing to maturity, which can take up to three years. In areas where remnant populations are depressed or absent, PSRF spreads oyster seed developed in hatcheries. In some areas, PSRF combines both strategies in order to speed up oyster recolonization. 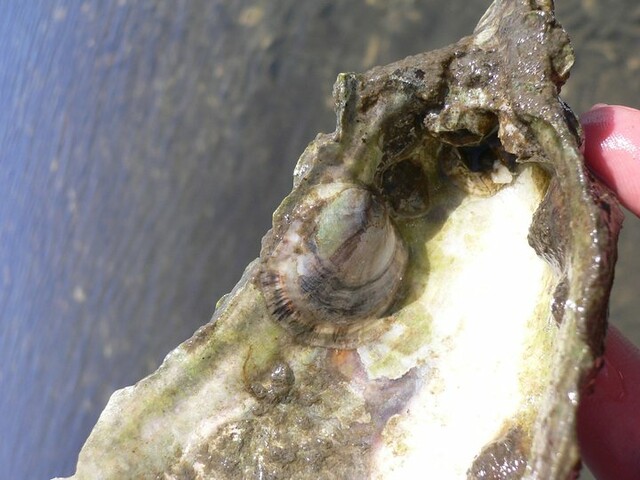 However, Pacific oyster shells aren’t used willy-nilly for oyster restoration. There are stringent restrictions on where the restorative Pacific oyster shells can be sourced from in order to avoid spreading disease, says Brady Blake, a shellfish biologist with WDFW. Bringing shells in from restaurant recycling programs is strictly off-limits.

Native Olympia oysters don’t always get the hint that they should settle on Pacific oyster shells, though. Dr. Jennifer Ruesink is a professor at the University of Washington who specializes in Olympia oyster research and habitat competition from invasive species. Ruesink explains that Pacific oysters are doing so well in some areas that Olympia oyster larvae aren’t able to compete.

Despite their best efforts to restore Olympia oysters in Port Gamble Bay, for example, Pacifics dominated. A similar problem exists in Willapa Bay. Ruesink says there are plenty of native larvae in the waters, but they just end up settling in places where they are not able to survive. Restoration could mean removing Pacific oyster shells from this non-survivable area so the native larvae aren’t receiving mixed signals.

The flip side of this is that native oysters are settling in Willapa Bay, just not where they have historically thrived, Ruesink says. “We’re left wondering what goals we really want to get to in terms of restoration.”

Restoration of this native species really comes down to the restoration teams’ end goals. For some researchers, restoration is about understanding if this native species could ever thrive the same way it did a hundred years ago. The Olympia oyster is seen by many as crucial to restoring the Puget Sound ecosystem — as filter feeders, each oyster can clean up to 12 gallons of water a day of sediment and excess nutrients. Oyster reefs also provide shelter for crustaceans and microorganisms that are food for fish like juvenile salmon and herring.

But, as Ruesink says, “people have different opinions about the best way to restore and the primary goals of restoration. And that diversity is okay as people learn what works and what doesn’t.”

Some researchers think that Pacific oyster shell is unnatural and shouldn’t be used for restoration purposes, as the shells stick around for a long time after they are spread. Ruesink sums up the argument she’s heard as: “You can’t really get back a [historic] native oyster bed because it’s full of these big shells.”

However, if restoration is meant for replenishing a native species, researchers and restoration teams have already learned a lot. In some areas predators pose a threat for young, settled oysters, Ruesink says. In Lynch Cove off of Hood Canal, her research team saw evidence of oyster drills (snails) and, surprisingly, small sea stars making a meal out of juvenile oysters.

For Peabody and PSRF, the end goal of restoring 100 acres of native oyster habitat by 2020 would be impossible without collaboration across the Sound from organizations and tideland owners. As Washington is the only state where tideland can be privately owned, cooperation from these individuals has been imperative, Peabody says.

And Olympia oyster restoration isn’t just a Washington effort. In California, researchers are more flexible in considering suitable surfaces for oyster restoration and the state even has a new law advocating the planting of eelgrass next to other shellfish to prevent ocean acidification.

Though Olympia oyster populations are much more stable now, thanks to all of the conservation work, they are still protected from harvest on public tidelands in Washington. Since they are not easy to identify — to many harvesters they just look like small Pacific oysters — the state has set the legal minimum size for oysters that can be harvested on public beaches at 2.5 inches (Olympia oysters almost never reach that size).

However, if you are interested in having a taste, these oysters are still farmed commercially in some parts of the state and can be found in several local oyster bars when in season. And if visiting a shellfish farm is of interest, don’t forget the rubber boots; no one gets far without them.

How the World’s Fattest Parrot Came Back From the Brink

New Zealand’s kākāpō has long been endangered, but when a deadly fungal disease struck the country’s vets came to the rescue. 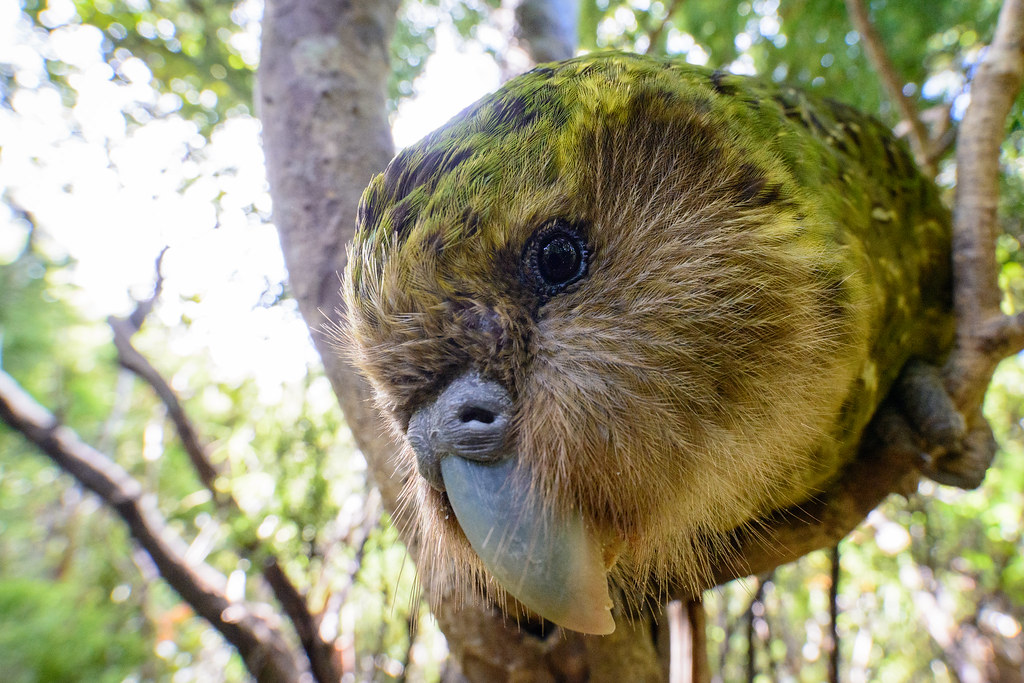 In Afghanistan, a New National Park Carries Hope for Conservation and Peace 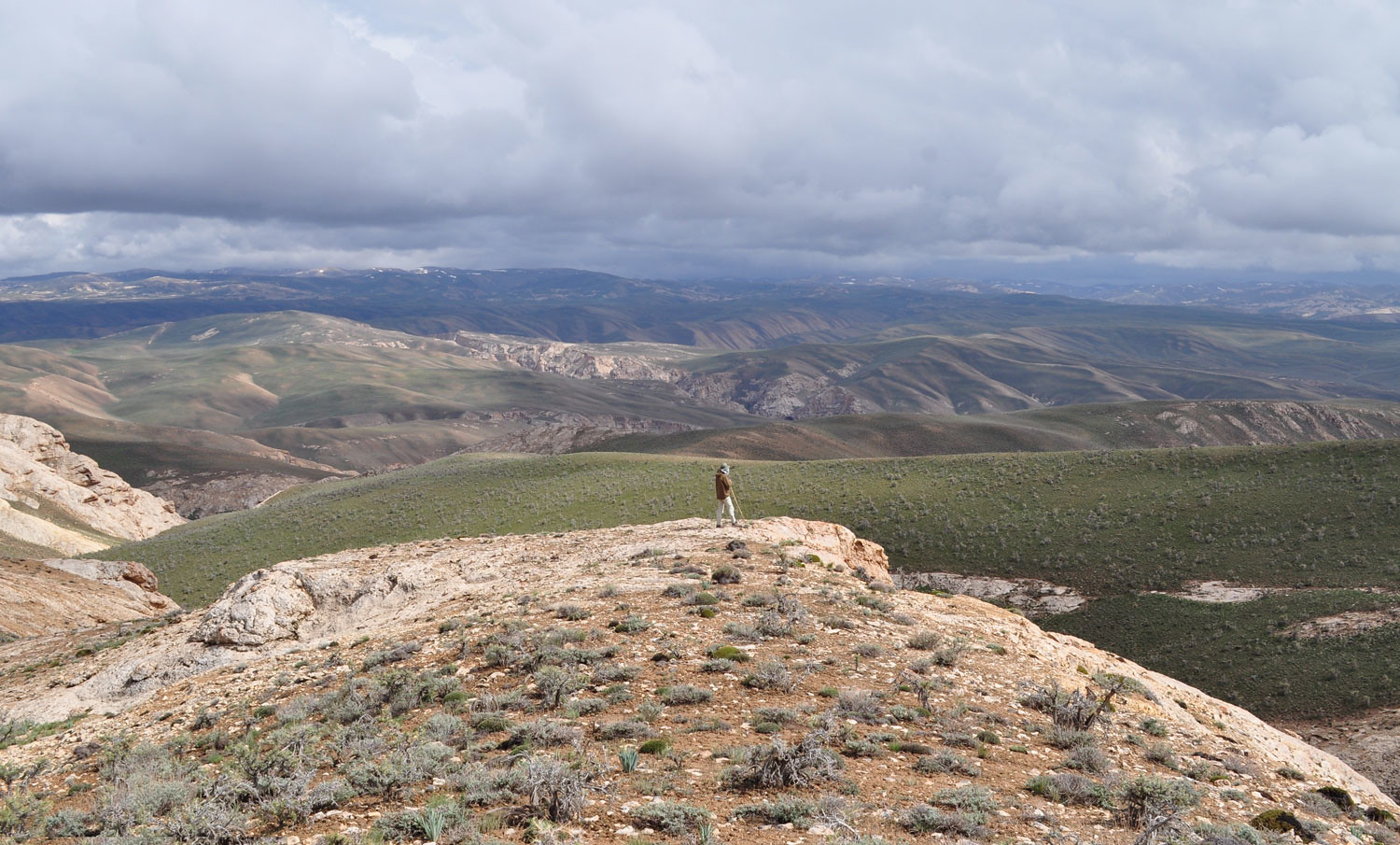 Increased ship traffic in the warming Arctic drives fish away, study shows, spelling larger impacts on the marine food web and the communities that depend on it.

New research suggests that this technology is more error-prone than initially assumed. 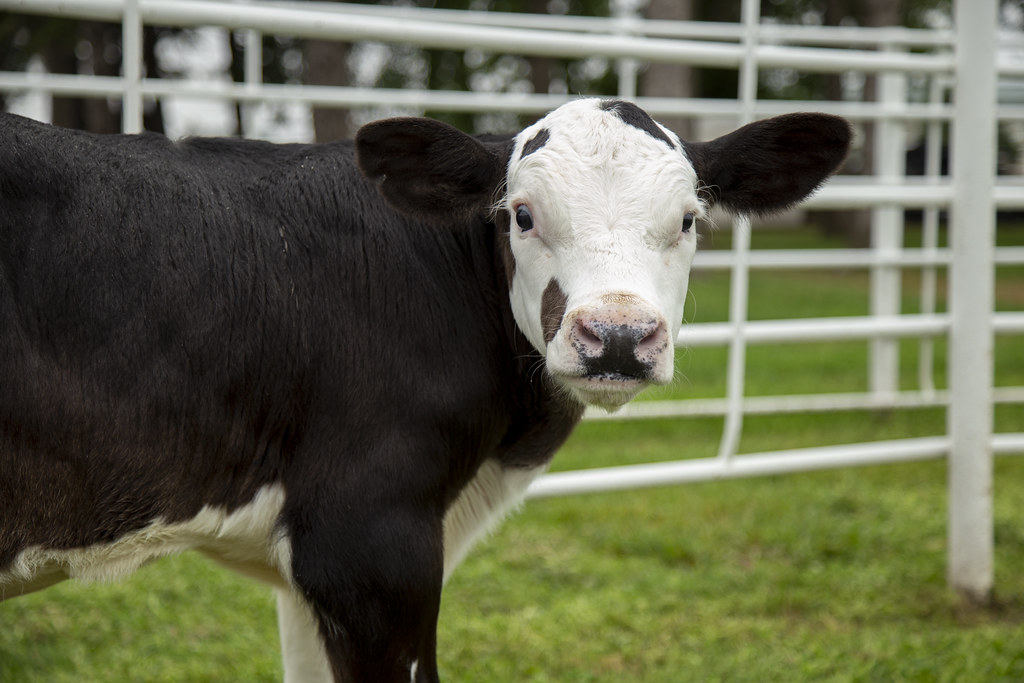 Investigation traces meat sold to JBS and rival Marfrig to a farm in Brazil owned by man implicated in Mato Grosso killings.

Children no longer grow up in relationship with wild beings. Big machines are filling that void. 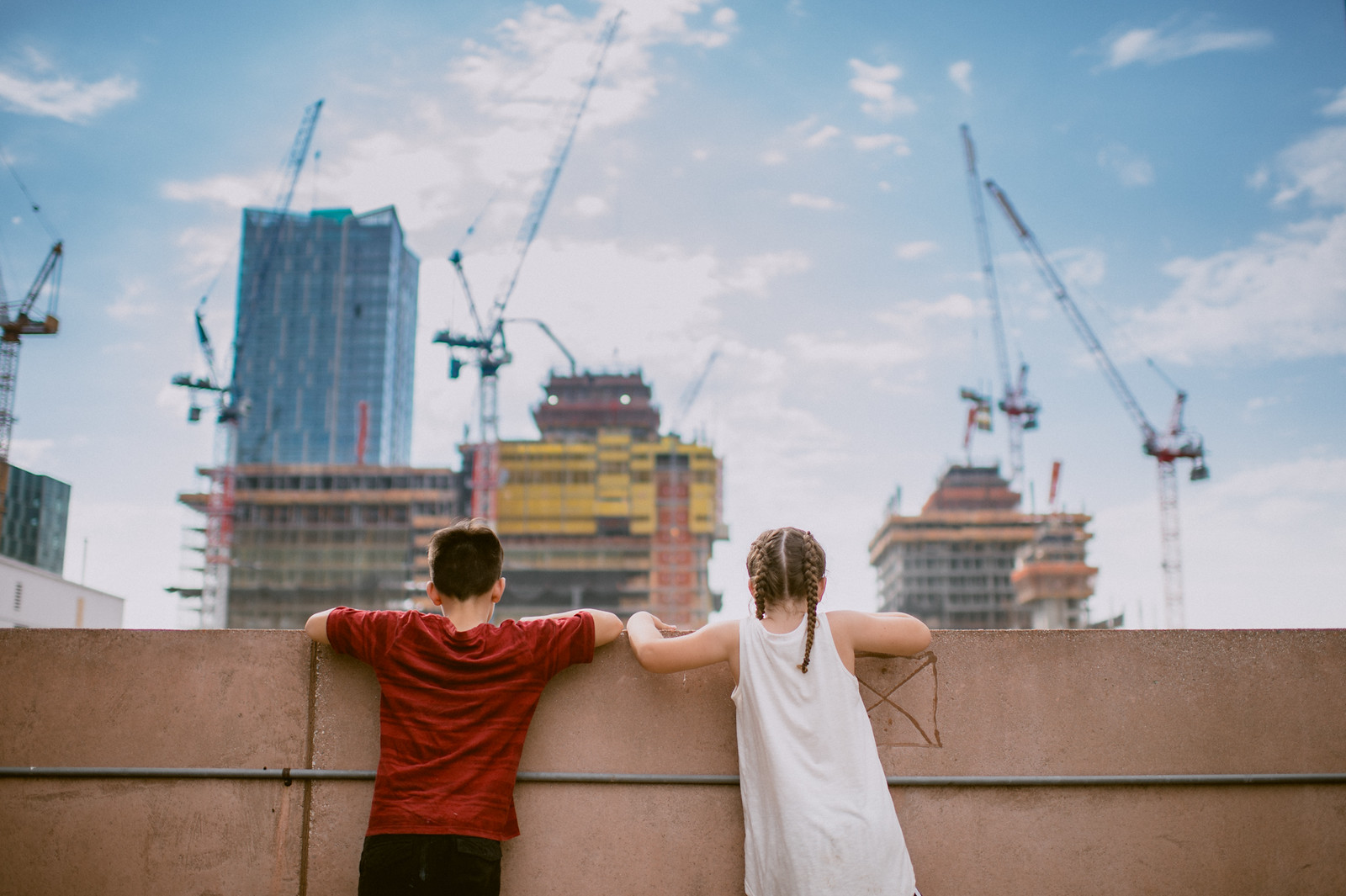