The US Forest Service issued a draft decision yesterday for a massive post-fire logging project in the Stanislaus National Forest portion of the 2013 California Rim Fire, which covered 257,171 acres on the national forest and Yosemite National Park. A final, signed decision on the proposal is expected this afternoon.

Photo by Chad HansonA carpet of lupines covered this large high-intensity fire patch in the Rim Fire area this spring, showing that forest is regenerating naturally.

The draft decision proposes over 37,000 acres of intensive post-fire logging, which would remove the majority of the rarest and most ecologically valuable habitat resulting from the fire on the Stanislaus National Forest: “snag forest habitat” created by high-intensity fire in mature conifer forest. (Forty one percent of the Rim Fire area was comprised of non-conifer vegetation, such as grassland and foothill chaparral, and most of the forest area burned at low/moderate-intensity, wherein only a portion of the trees were killed).

19,462 acres of the fire area. An additional 17,706 acres of “roadside” logging is planned along roads, including old logging roads, which are not maintained for public use (and many of which are closed roads, long since decommissioned). Much of this would be clearcut too, including live, healthy, mature, and old-growth trees, which would be removed by the thousands, for no credible public safety benefit, based upon profoundly vague criteria that allow just about any tree to be cut.

Because the Forest Service has closed most of the Rim Fire area to public access, and because the agency is not marking trees before they cut them along roads, there is no accountability.

The Forest Service would keep 100 percent of the revenue from selling the timber from our federal public lands to private logging companies. Most of these funds would be used to pay Forest Service staff to implement future post-fire logging projects, under the “Salvage Sale Fund.”

As I have reported previously in Earth Island Journal (see here and here), the Forest Service has repeatedly claimed over the past year that the Rim Fire damaged and destroyed the forest, using this as a justification to propose one of the largest commercial logging projects in the history of the national forest system. The agency’s comments along these lines have been particularly pointed with regard to California spotted owls. Even before the smoke cleared last year the Forest Service has claimed that the fire was too big and intense for spotted owls, suggesting that post-fire logging would have little adverse impact because most of the Rim Fire area is no longer suitable habitat for the owl.

The agency repeats this claim in various forms in the Final Environmental Impact Statement (FEIS) and draft decision, released on August 27, 2014, which is interesting, given that the Forest Service’s own wildlife biologists have been gathering data on California spotted owl occupancy in the Rim fire since the spring of this year, and the results—which are nowhere mentioned in the FEIS or draft decision — are dramatically at odds with the Forest Service’s claims in the media. 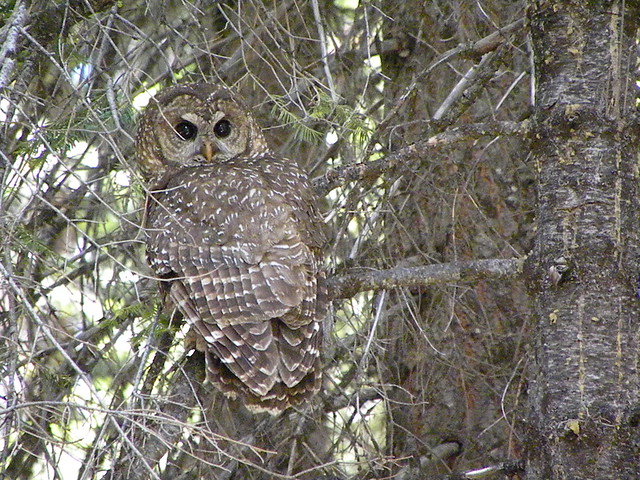 Photo by Ryan Kalinowski/USFSBiologists report that spotted owls have been moving into the Rim Fire area. If the snag forest
habitat is removed through post-fire logging, it will affect spotted owl poopulations which are
already declining throughout the Sierra Nevada range.

The John Muir Project (JMP), Center for Biological Diversity (CBD), and the Wild Nature Institute (WNI) requested the 2014 spotted owl occupancy results in the Rim Fire area from the Forest Service in spring this year. Initially the agency refused to give us the data, but finally it relented and provided some preliminary data on June 5. However, most of the surveys had yet to be completed at that time. When we requested the final data, the Forest Service again refused first and then relented, ultimately providing the complete results in mid-August.

Monica Bond, a scientist with WNI, who is the nation’s top expert on the relationship between spotted owls and wildland fire, analyzed the data and produced a report which was sent to the Forest Service on August 21. Her findings are startling. Bond found that one year after the Rim Fire, a total of 92 percent of the historic spotted owl territories within fire-affected area is already reoccupied by spotted owls, and 87 percent of the territories are occupied by pairs.

To put this in perspective, average annual spotted owl occupancy in mature/old unburned forest is 67-76 percent. The owls do not occupy an individual territory every single year so, within any given year, a portion of the territories that have been occupied one or more times in the past will not be occupied. A rate of 92 percent occupancy is, therefore, sky high. Not only is it substantially higher than occupancy rates in unburned mature/old forest in the Sierra Nevada, the 2014 results indicate that the owls specifically colonized a number of areas that were unoccupied before the fire — i.e., spotted owls deliberately moved into the Rim Fire area, rather than leaving it. According to Bond’s analysis, even in the territories that experienced mostly high-intensity fire, the spotted owl pair occupancy rates are essentially the same as in territories with low levels of high-intensity fire.

This result should not be so surprising given that current research shows that while spotted owls select unburned or low/moderate-intensity fire areas for nesting and roosting habitat, they preferentially select unlogged high-intensity fire areas for their foraging habitat. This is because these high-intensity fire areas, which create ecologically-vital snag forest habitat, have an abundance of habitat structures, such as snags, downed logs, native shrub patches, and areas of dense natural conifer regeneration, that provide excellent habitat for the small mammal prey species upon which spotted owls depend. Given this, it is also not surprising that when much or most of the snag forest habitat is removed through post-fire logging, it strongly tends to extirpate the owls, which are declining in population throughout the Sierra Nevada, except where mechanical “thinning” and post-fire logging are not allowed (e.g., Sequoia and Kings Canyon National Park).

To prevent a loss of spotted owl occupancy, scientists have recommended that the Forest Service avoid post-fire logging at least within 1500 meters of nest or roost locations. But in the draft Rim Fire decision, the Forest Service is proposing to conduct post-fire logging within most of the occupied spotted owl territories. In some of these territories, most of the area would be clearcut, leaving large barren expanses.

There have also been interesting developments on another high-profile issue pertaining to the Rim Fire — natural forest regeneration in the high-intensity fire patches. In my previous articles on the Rim fire for the Earth Island Journal, I have discussed the abundance of natural post-fire conifer regeneration that I, and others, have observed in the large high-intensity fire patches within the Rim Fire area. However, these observations were based upon short excursions into the fire area due to the fact that the Forest Service has prohibited public access to most of the fire-affected area, and has allowed only limited, and brief, exceptions.

JMP and CBD have asked the Forest Service several times for permission to access the fire area in order to formally document the level of natural conifer regeneration before logging destroys the evidence. So far, the Forest Service has refused our request, giving no reason whatsoever.

This is a significant issue not only because it prevents natural conifer regeneration — we lose seedlings of conifers that have specifically adapted, over millennia, to the particular soil and site conditions at each location in the forest and end up with generic nursery-grown conifer seedlings planted by the Forest Service — but it also costs taxpayers more.

The Forest Service has repeatedly claimed that they need to implement the Rim Fire logging project in order to generate revenue to pay for conifer planting. This is a deliberate falsehood on two levels. First, it implies that there is little or no natural conifer regeneration happening in the Rim Fire area, which we now know is not true. Second, it suggests that the revenue from the logging would generally be used for replanting, and would be sufficient to cover replanting costs.

In reality, killing-off the existing natural conifer regeneration in the Rim Fire area through logging will cost taxpayers millions. The Forest Service estimates that it will generate about $200 per acre in revenue from the logging project. However, the agency’s own documents show that artificial planting (including site preparation and planting expenses) costs about $700 to $1000 per acre, and sometimes even more. Therefore, on any given acre, when post-fire logging kills natural conifer regeneration, the net cost to taxpayers for replanting the areas is at least $500 to $600. The real cost could be even higher given that under the Salvage Sale Fund most of the timber sale receipts are typically required to be allocated to future post-fire logging projects, not replanting.

As the environmental assessment for another, much smaller, recent Forest Service post-fire logging project — the Aspen post-fire logging project, Sierra National Forest — recently admitted: “Foregoing recovery and reforestation treatments would save taxpayers approximately $3,287,000 of appropriated funding needed to implement these activities.” Because of the massive size of the Rim Fire, the net cost to taxpayers — just on this issue alone — would, by conservative estimates, be more than $15 million, and could easily top $25 million.

And for what? So the Forest Service can generate about $5 million in revenue from selling public timber to private logging companies — most of which would be used to pay Forest Service staff to implement the next round of post-fire logging projects? This is a system so corrupt, so wrong-headed, and so outrageously damaging and wasteful, it boggles the mind and shocks the conscience. This is, essentially, nineteenth-century forestry management ideology being applied in the twenty-first century.

Even though more than 150 scientists sent a letter to the Forest Service specifically urging the agency not to log the Rim Fire area, pointing out that the snag forest habitat created by higher-intensity fire is the rarest, most biodiverse, and most threatened forest habitat type in the Sierra Nevada, the Forest Service ignored the overwhelming consensus of the scientific community.

The message here is clear: It is time for a major change in management on our national forests.