Correction/clarification: This story has been modified since its original posting. Kaloti Metals is not “a branch” of the Dubai-based Kaloti Precious Metals, as we originally reported; it is an independent, US-registered corporation that has a close partnership with its parent company in Dubai. We regret the error. As originally reported, Kaloti Metals did not respond to an initial request for comment. Kaloti Metals insists it does not import gold from Madre de Dios, and the story now includes a statement from the company.

Over the past two years, the Peruvian government has been cracking down on informal mining operations and illicit gold exports in an effort to end the environmental and social abuses related to illegal gold mining. Security forces have been raiding illegal mining camps, destroying equipment, and monitoring gold trading companies involved in buying and selling contraband gold. Yet recent reports show that these efforts have failed to curb the proliferation of new, unauthorized mines in the South American nation’s rural hinterlands. Not just that, a big chunk of this dirty gold is making its way into the United States. 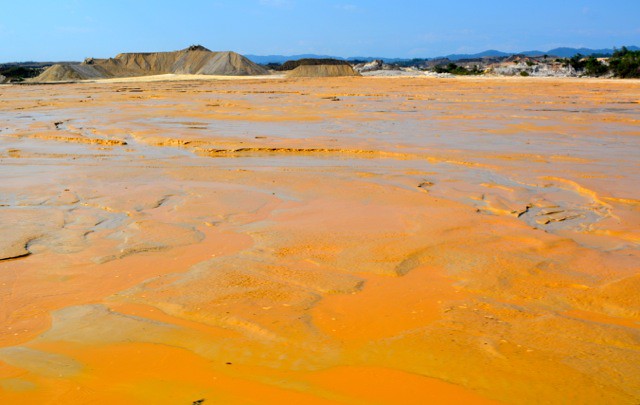 Photo by Paula Dupraz-DobiasPollulted waters in Hueypetue in the Madre de Dios region, where at least 50,000 hectares of rainforest have been destroyed by illegal gold mining.

In the southeastern Madre de Dios region, known to be one of the most bio-diverse areas on Earth, illegal mining operations continue to move deeper and deeper into virgin forests, where acres upon acres of trees are being cut down and mercury is being dumped into subsoils and rivers, exposing humans and the environment to irreversible damage.

“There has been a flurry of small [scale] gold miners, who have been dispersed, and are working independently. On the map, they look like thousands of independent miners,” says Greg Asner, who has been working with Peru’s environment ministry to aerially map the rainforests from the Carnegie Airborne Observatory, which has a lab in Lima. “The problem is still there. It’s now more diffused than ever before”.

Asner says that his research has shown that illegal gold mining was destroying the forest at twice the officially acknowledged rate. According to the Carnegie Amazon Mercury Ecosystem Project, gold mining has destroyed some 50,000 hectares in the region and, has released some 30 tons of mercury into nature.

Just as police operations have pushed illegal miners further into the forest, stricter monitoring by customs officials has resulted it new smuggling and sales routes for the prohibited mineral.

In 2013, after a leading Madre de Dios miner, Gregoria Casas, named buyers of her gold, a Swiss refinery, Metalor, which had been purchasing gold from her contacts, halted purchases from exporters suspected of dealing with illegal gold miners. Metalor had just joined three other major Swiss gold refiners in a public-private program to support responsible gold mining in Peru. However the exporters soon found clients among US gold traders, mostly based in Miami, which is a regional hub for gold trade.

A 2014 study by the Swiss nonprofit Society for Threatened Peoples reported that Kaloti Metals, a Miami-based associate company of the Dubai Kaloti Jewelry Group, as well as NTR Metals and Republic Metals Corporation, also based in Miami, were accused of importing gold from exporters who sourced the metal in Madre de Dios.

After $18 million worth of gold, destined for Kaloti Metals, NTR Metals and Akam Asset in the United States, was seized by customs officials in Lima recently, a Peruvian weekly, Ojo Publico, reported that regular flights from neighboring Bolivia, carrying gold smuggled across the border from Madre de Dios, was making its way onto Miami.

The article said that the shipments, equivalent to 35 metric tons of gold, “were dispatched to US refineries Atomic Gold, Republic Metals Corporation, World Precious Metals, NTR Metals, and Kaloti Metals and Logistics.” Atomic Gold did not respond to requests for comment.

When contacted by Earth Island Journal last month, Kaloti Metals said that it was unable to reply to inquiries since it was short staffed during the holiday season. Since then, Kaloti Metals has issued a statement to Earth Island Journal disputing that it buys gold from Madre de Dios. According to Awni Kaloti, managing director of the firm: “KML only purchases gold from licensed and government approved exporters in Peru and maintains proper documentation supporting the fact that all precious metals imported by KML to date have met all legal requirements of both the USA and the country of origin including customs and airport authorities – in Peru and Bolivia. Moreover, we only engage in business activity with companies who have fulfilled our compliance requirements (which include source of gold verification and admissibility) and who possess the proper licensing and accreditations in order to legally engage in such business activity.”

When asked about what is being done to curb imports of illegal gold, the US ambassador to Peru, Brian Nichols, said that “gold was incredibly fluid, once it enters the system it is very difficult to prove where it came from… When it has already reached an export market like Switzerland or the United States, it is incredibly difficult. But doing it early on in the process, that’s where you can have the greatest effect.”

During last month’s annual United Nations climate change conference, countries discussed the importance of preserving forests as a means of soaking up and storing carbon. The Peruvian Amazon jungle —the fourth largest after Brazil, the Congo, and Indonesia — serves as a valuable carbon sink. Unfortunately, rampant illegal mining has rapidly deforested wide swaths of the forest, at least 64,000 acres by some estimates, especially in the Madre de Dios region.

With international gold prices still relatively high, limited effective policing on the ground, and few alternative economic opportunities for the many poor people who flock to the jungle, illegal mining is bound to continue. As Asner pointed out, the mining is a “poverty issue, a social problem. You can’t just send in the police to solve the problem”.

Illegal gold amounts to about 20 percent of all gold exports from Peru. The country is the world’s sixth biggest gold producer. Customs officials valued the illicit trade at about $3 billion. It now represents a bigger business for Peru than cocaine.

For Asner, “the situation is getting worse and worse”. The aerial mapping which he has directed shows multitudes of blue specks, representing the wildcat mining operations, appearing throughout the Madre de Dios region.

While activities in some areas which suffered the most destruction, notably along the Interoceanic Highway have now nearly ceased following police operations, new camps have been set up at the ends of seemingly lost tracks carved under giant canopy trees. And beyond the rudimentary homes, usually not more than a sheet of blue plastic wrapped around four stakes, is a new image of hell on earth.