Until 2007, Uruguay was strapped for energy resources that forced it to rely on importing energy from South American neighbors. That has changed. Today, 98 percent of the country’s power is delivered reliably and affordably from renewable sources. Compare that to the worldwide average that is typically reported in the low- to mid-20 percent range and you can see that this small country might just be on to something. Does little Uruguay have a blueprint for renewable energy that others could follow?

In the decade leading up to 2017, forward-looking policies and projects took Uruguay from having virtually no wind power to nearly 4,000 megawatts of installed capacity. ​Photo by Jimmy Baikovicius.

Located between Argentina and Brazil, its two larger neighbors and trading partners, Uruguay is geographically the second-smallest nation in South America, with a population of about 3.45 million people, of whom roughly 1.8 million live in the metropolitan area of its capital, Montevideo. Since the signing of the Kyoto Protocol in 1997, Uruguay has surprised its South American neighbors with its growing list of environmental successes, including conserving native forests, protecting biodiverse areas, and showing remarkable progress on a promise to be carbon neutral by 2030.

Among conservation projects that have made international headlines are Uruguayan architect Rafael Viñoly’s ecologically driven bridge design at Puente Laguna Garzon that not only protects the lagoon’s wildlife, but transforms a typical vehicular crossing into ”an event” by reducing the speed limit of the cars so that passengers are provided an opportunity to savor the natural beauty of the lagoon.

While these projects are impressive, it is the country’s creation of larger energy infrastructure changes that have made the most impact.

In the decade leading up to 2017, forward-looking policies and projects took Uruguay from having virtually no wind power to nearly 4,000 megawatts of installed capacity. Today it is one of the world leaders in wind power production, alongside Denmark, Ireland and Germany, with more than a third of its electricity coming from wind farms. According to the International Energy Agency, only Denmark, Lithuania, and Luxembourg are more reliant on wind and solar power. Adding hydraulic power generation to the mix, emissions levels in the country have fallen roughly 20 percent from their peak in 2012. Just how this happened is worth noting.

To transform its energy landscape, the Frente Amplio, or FA, Uruguay’s governing party from 2005 to 2020, recognized the reality of a country dependent on importing fossil fuels while living in an ideal location for solar, wind, and hydraulic power generation.

With its gently-rolling landscape, higher than average year-round sunshine, and hundreds of miles of ocean and river coastline, Uruguay has prime space for deploying energy alternatives. In addition, the country has identified significant opportunities for generating energy from biomass produced by the agriculture industry. 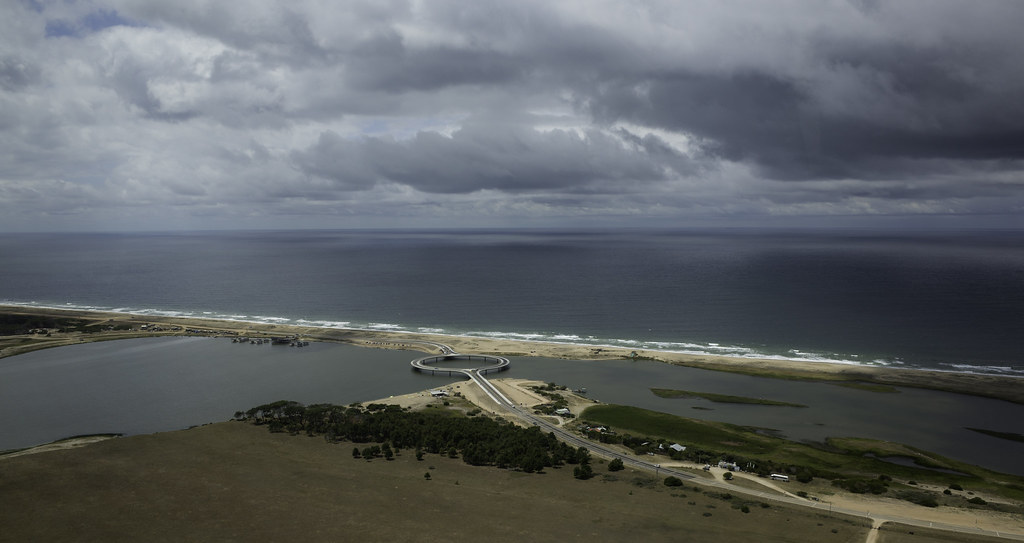 ​Among conservation projects that have made international headlines are Uruguayan architect Rafael Viñoly’s ecologically driven bridge design at Puente Laguna Garzon that not only protects the lagoon’s wildlife, but transforms a typical vehicular crossing into ”an event.” Photo by Jimmy Baikovicius. 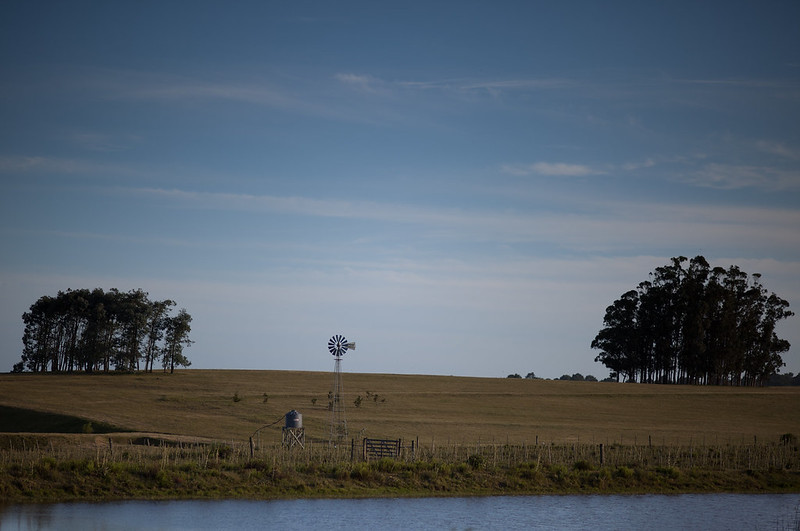 A small windmill in Maldonado, Uruguay. Throughout Uruguay, there is a strong emphasis on local energy production. Photo by Jimmy Baikovicius. 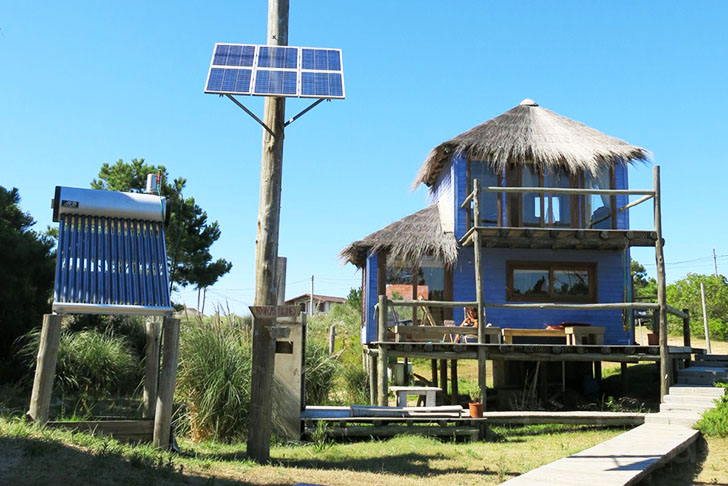 In 2005, Uruguayan leaders laid out a plan for the country’s future built upon a broad consensus among a wide range of national and international stakeholders. It’s important to note that this comprehensive plan included not only outside investors, who could offer capital and expertise, but also dedicated in-country stakeholders. To date, the FA’s vision for an inclusive, people-oriented strategy for energy transformation has shown not only remarkable promise, but results.

Throughout Uruguay, there is a strong emphasis on local energy production, particularly solar energy in rural areas, focusing on rural schools and churches far from the grid, as well as hospitals, hotels, sports clubs, and new public buildings. While only about two percent of Uruguay’s total energy production comes from solar sources currently, the potential for solar power in Uruguay is encouraging given the country receives an average of 1,700 KW per square meter of sunlight each year. That volume of sunlight puts Uruguay on a par with sunny Mediterranean countries.Legislative support and rewards for solar power have existed since 2013 and many benefits are also available under the country’s Investment Promotion Law that offers incentives for investing in manufacturing, implementing, and utilizing solar energy.

An example of the country’s determination to use solar as an alternative is reflected in the country’s solar thermal mandate established in 2009 by the Solar Thermal Law, with additional provisions in 2011 (Decree 451/011). The law states that after 2014, all new construction and refurbishments of public buildings, hotels, health, and sports facilities, where hot water is expected to account for over 20 percent of the building’s energy consumption, must obtain at least 50 percent of water heating energy from solar thermal energy. After 2012, heated pools had to use solar heating unless they used a different renewable energy source.

“The energy policy of Uruguay has focused highly on renewable energies, with the ambitious goal of incorporating them in the short term and providing attractive tax benefits for that purpose,” says Fernanda Panizza, Biz Latin Hub’s country coordinator and corporate lawyer, who counsels both foreign and national business stakeholders in the country. “Uruguay offers not only an advantageous business environment,” she notes, “but also great social stability, and considerable fiscal incentives for investments.”

The framework for fiscal incentives for renewables in Uruguay was provided by laws established as early as 1998 and significant income tax reductions for renewable electricity generation, renewable energy service providers and manufacturing of renewable energy equipment. The purchase of wind power equipment, for example, is exempted from the country’s value added tax (VAT). Panizza advises her clients how Uruguay’s energy-friendly laws present advantages for foreign investors. “Foreign investments receive the same treatment as national ones,” she says. “There are no restrictions regarding capital and funds repatriation, or the transfer of profits, dividends and interest.”

Along with the benefits of sourcing renewable energy for new building projects, Panizza describes a foundation for all new architecture and construction that rewards energy conservation.

At 46, Pou is the youngest president in the history of Uruguay and while his National Party is seen as politically right of center, his personal devotion to the conservation of the sea (he is an avid surfer) is generating some optimism among environmentalists that existing renewable energy policies will stay in place, along with the previous administration’s vision for an inclusive and people-oriented strategy for energy transformation.

Since taking office in March of 2020, Pou has taken concrete steps to make good on his campaign promises to make his a “government of action” and “one that engages with the people”. He has established his presidency as part of a coalition of political parties and has created a Ministry of Environment. With experienced politician and poultry farmer, Adrián Peña at its helm, the ministry has formally reiterated Uruguay’s commitment to the United Nations Environmental Assembly to prioritize environmental management. Uruguay’s sustainable development model prioritizes the conservation of the country’s water quality and biodiversity, proper waste management, the vigilant mitigation and adaptation to the effects of climate change.

National polls have indicated that, within Latin America, Uruguayans are among the most supportive of democracy and by far the most satisfied with the way democracy works in their country. How Uruguayans feel about being leaders in clean energy might just provide some of the momentum to keep the country’s strong commitment to renewable energy going.

World affairs analyst Frida Ghitis, who has covered political and social issues in the region for over a decade believes that there is good reason to look for the continuing positive trajectory of Uruguay’s progressive energy policies. “My sense is that Uruguay’s commitment to renewable energy is so deep that it transcends the left/right divide,” she says. “I don’t foresee that the center-right administration in Uruguay will backtrack on progress toward green energy.”

The history of Uruguay’s successful shift to renewables offers similar small countries (and, perhaps larger ones, too) a blueprint — if not just good ideas — for solid progress towards renewable energy. But, despite past successes, it’s not completely clear that Pou’s evolving policies, faced with water management issues in the country’s interior and ongoing coastal conservation initiatives, can maintain the country’s momentum scaling up renewable energy. The renewable energy communities around the world will be watching intently.

Andy McDonough is a freelance writer, photographer, educator, and technology consultant who splits his time between the greater New York area and Tucson, Arizona. His clients have included Fortune 100 companies, technology start-ups, and government and public natural resource conservancies and publications.